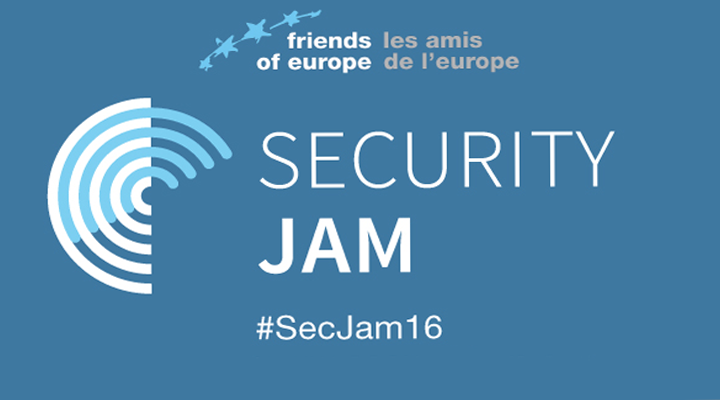 In June 2016, Friends of Europe organised an event called “Security Jam 2016”, bringing together a unique coalition of governments, think-tanks, businesses and social organisations for a global brainstorm on making the world a safer place. Over 2,500 participants from 131 countries took part in the event, with key inputs in debates from 48 VIPs including academics, public officials, policy-makers, activists and researchers with diverse backgrounds. The following is a report highlighting the statements and debate interactions with Dr. Azmayesh, founder of IOPHR, Jurist-Scholar and a Human Rights Activist, who was on the panel of VIP Jammers. The topics of discussion varied from underlying political and social tensions around the world, to the fight against organised crime and against violent extremism.

The Underlying Reasons for the Existence of Islamist Extremism

In order to get a full grasp of the underlying economic, geopolitical, financial and security issues underlying the existence of Islamist Extremism, it is crucial to remember that these issues do not have any relation to the religion if Islam itself. It is important to distinguish extremist activities as acts of violence, that have no basis in religion, but are rather the manifestation of the agendas of certain groups, as well as several socio-political reasons.

If Daesh (ISIS) and other similar, so called “jihadist organizations” terrorize innocent people under the name of Islam, it is only done in order to exploit the platform of faith to cause the most amount of damage, and attain control over society. The religion of Islam and the teachings of the Quran cannot be blamed in this crossfire. In reality, the Quran explicitly prohibits acts of violence such as terrorizing innocent people, killing and injuring the inhabitants of several countries, and propagating chaos in the world, as these are not the sign of faith. Anarchism is absolutely prohibited by the Quran. The acts of extremist organisations are, therefore, completely against the teachings of Islam, and this is a crucial point to remember, when talking about issues such as extremism. In other words, religious violence does not exist; what exists is violence caused by individuals and groups belonging to an extremist school of thought.

If it is not for the reason of religion, then why do the wars in the Middle-East exist? What is behind the military actions of Russia and Iran, in Syria? These questions are important to be raised. Russia and Iran work together with Syria to keep the East Camp in the world (Russia) strong, as Syria plays an important strategic role here. The Russian Air-force did not proclaim any religious pretext to launch the ballistic missiles on the positions of the oppositions of Bashar al-Asad in Syria, and they have continued with these military actions purely for strategic reasons. When the Sepah-e Pasdaran (The Army of the Guardians of The Islamic Revolution), from the Islamic Republic of Iran, are sent to support Bashar al-Asad, they know that they are supporting the “Ba’ath Party”, which is a communist party that has nothing to do with Islam. Therefore, the Iranians aren’t fighting for Islamic reasons, but for strategic reasons.

Conclusively, the war in this region has nothing to do with Islam, but is a strategic war between the two world camps – the East (Russia) and the West (US, European Union and their satellites), in which Syria is geographically a crucial strategic-point. If the government of Asad falls down, Russia loses its “legitimate presence” in the maritime installations of Tarsus, and its aerial installations in Lazeghieh/Latakia. From the other side, the Mullahs need the government of Bashar al-Asad, to install their missile launchers close to the borders of the Israeli territory, and to support the military need and logistics of Hezbollah in Lebanon.

At this moment Syria is divided into two territories that fight each other and get their military support from two adversarial eastern and western camps, therefore the central power of Bashar al-Asad no longer exists, and a power-vacuum has been created, that allows the different anarchist groups such as Daesh (ISIS), Al Qaeda, etc. to gain territory and control. People who are engaged in and paid by the camp of these groups, particularly Daesh, are not only in Syria, but also in Yemen, Libya, Afghanistan and wherever the central government is removed due to the civil war.

Mosul in Iraq, and Raqqa in Syria, are the central places of oil exploitation, in order to sell cheap oil to several interested countries. Through this way, Daesh can recruit more warriors in its ranks, especially the impoverished people who are abundantly available in the Africa, Europe, Asia, etc. The young individuals (aged 17-30) suffering from identity crisis, financial troubles, social adversities, and often with a delinquent background, make a very easy target for Daesh.  If Daesh would lose these central points of fossil fuels, mines, and antiquity, they would cease to exist.

It is important to remember that these groups market and sell their ideology under the name of religion, in order to reach out and control a wider audience. However, their actions have nothing to do with Islam, and must be recognised for their true nature of organised crime and terror.

The Agenda and Techniques of Extremist Groups, and Understanding this Global Conflict

Groups such as Daesh or ISIS, by definition, are an anarchist movement, which hides itself under the façade of a supposed “holy or religious war” or “Jihad”. They are, in effect, an anti-civilization force. Their preachers and propagators, who help spread the extremist ideologies, search for vulnerable targets within society that can be radicalised and brainwashed. They try to target young adolescents, homeless people, those suffering from social and financial adversities, prisoners, immigrant population, etc. in order to incite feelings of victimization and social injustice within them. They encourage such targeted individuals to offer their lives and avenge this injustice.

In order to stop such organisations, we must go back to the roots of the problem, which dates back to the Arab springs in 2010. Back then, there was an uprising in several Arab countries like Tunisia, Egypt etc., where the central power was overthrown through the populist uprisings. The same uprising occurred in Syria, but at that time the Iranian government, who always supported Bashar al-Asad, refused to accept the uprising and kept Bashar al-Asad in power, in order to not lose influence in the region that is close to the Israel border, to support the Hezbollah and keep Israel under the threats of its missiles. The Iranian support of Bashar al-Asad is not based on religion, but has strategic reasons. In fact, Bashar al-Asad is from the Ba’ath Party, which is a communist party and not related to any religion. Because of the Iranian support and sustaining the power of Bashar al-Asad, other countries like Saudi Arabia got involved to protect their own sphere of influence. With the entry of Russia and the West, this entire conflict became a global conflict. This situation is likely to remain until the Iranian policy in support of Bashar al-Asad changes.

Several important voices have been raised against this global conflict, and the activities of such anarchist organisations. All the scholars of the different branches of Islam explicitly state that the actions of Daesh have anything to do with the Islamic teachings. The clergies of Qom in Iran, the clergies of al-az-Har in Egypt, and several other clergies in the Muslim countries have issued a fatwa against the so called “Islamic State”. Unfortunately, the voice of the hate has a louder presence and effect in the world as of now.

Who can be a Target for Radicalisation by Extremist Groups?

When looking at the individuals that join the groups like Daesh, we see that vulnerable groups of society are being targeted by the extremist groups. These include individuals with criminal records, or delinquent backgrounds, adolescents, immigrants, those with lack of education, people suffering from socio-political and financial adversities, or perhaps victims of war. The vulnerabilities of these groups are exploited, in order to incite feelings of angst, hate, victimisation and revenge against the society that they live in. Such brainwashing techniques are crafted and implemented, and the extremist ideologies are presented as a solution to the apparent social injustice. Therefore, individuals may join the radical groups in the hope of money, social vengeance, promise of high rank, heroism and a place in heaven when they kill others and themselves.

The criminal groups like Daesh are, as a matter of fact, a new type of anarchists. As with most anarchists, they rebel against what they perceive as socio-political authorities and inequality in the social system. However, these ‘new-anarchists’ also want to bring the highest possible amount of damage and chaos to society by killing and causing civil wars.

The Need for Education and Awareness

We must distinguish between the ideology of the anarchist groups and the teachings of the Quran. This allows for a proper understanding of the roots of extremism, which are often mistaken as being related to religion. However, as explained earlier, the roots of extremism and its ideologies have no basis in religion. These are propaganda machines that look for ways to infiltrate society, and fill vulnerable minds with their own violent rhetoric. Having this in-depth knowledge of core issues, will help us plan more effective counter-terrorism strategies, and prevent the seed of radicalisation from being sown in the first place.

Knowledge and awareness about the core principles of Islam, will also ensure that there is no misuse of religious texts, and that one’s faith cannot be exploited as a medium for brainwashing people. If there is awareness regarding the true vision of a religion, it helps remove any room for ignorance or vulnerability, and prevents hate, superstitious beliefs and misconceptions from taking root. Presently, the awareness of the teachings of the Quran, specifically, are a priority, as several atrocities are being committed in the name of Islam, and this very fact is disturbing the cohesion in society. It is also creating further issues of segregation, Islamophobia and hate-crime, which weaken our society, and make it easier for extremist groups to exploit this social conflict.

Islam is based on the key principles of peace, spiritual chivalry, equality, tolerance and preservation of human rights and freedoms of the people. The Quran can be seen as a dynamic guide for social reformation, that establishes gender-equality and helps create a unified and altruistic society, where all cultures, backgrounds and beliefs can coexist in harmony. Those who are unaware of these core values, often fall for the segregation tactics that may separate Muslims from the non-Muslims in a society, allowing for radicalisation to take root.