Are Human Rights and Islam Compatible? 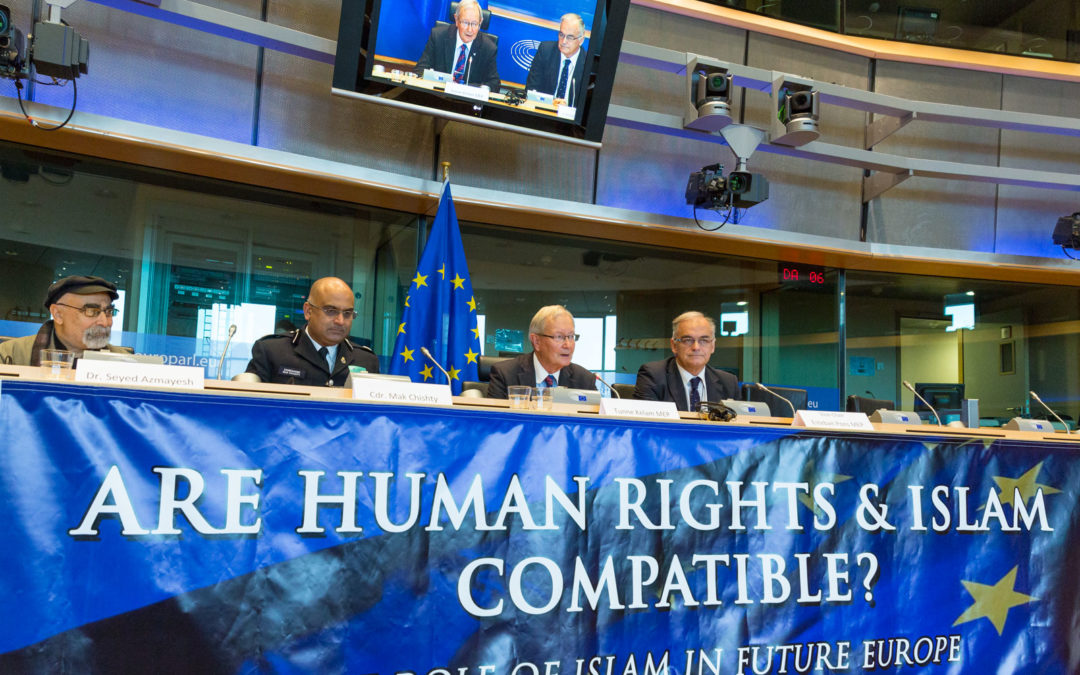 The panel consisted of these members of European Parliament, accompanied by Dr. Seyed Mostafa Azmayesh, a jurist-scholar and Human Rights activist, and Commander Mak Chishty, in-charge of the Hate Crime Department at the Metropolitan Police Force in London. The conference was attended by a large audience, including members of the European Parliament, European Commission, the European Press, dignitaries such as the Ambassador of Kuwait, and members of the community.

The conference began with Mr. Kelam’s opening remarks, in which he stated that all great religions of the world teach us to love God and to love one’s neighbour, and as a multi-cultural society, we must understand and recognize how the core of all religions have peace and tolerance at their core.

The second speaker, Member of the European Parliament and Vice Chair of the European People’s Party, Mr. Pons, argued that Human Rights principles, just as they are compatible with Christianity, Buddhism and other great religions, are also compatible with Islam. He also stated that education and integration are essential in establishing a society based on Human Rights. Education and an open-dialogue is necessary for understanding that our enemy is not the Quran, for instance, but those who misinterpret the Quran, and other holy texts in order to destroy our society. He reiterated that the problem is not our roots, but how we use them to integrate and shape our society for the future.

The third speaker was Dr. Azmayesh, who started by giving an account of the Quran’s view on human rights, and the role of human beings. He explained that the Quran views all human beings as representatives of their creator, and each person must be respected and treated equally, regardless of gender, race, or personal beliefs. This underlying principle of equality and respect for human life, is central to human rights principles, as well as the Quranic text.

Dr. Azmayesh went on to highlight several parallels between our democratic society, and the view of Quranic principles, in order to provide evidence for the compatibility of human rights and Islam. The religion of Islam, as explained by the scholar, is rooted in peace, tolerance, spiritual chivalry and inclusivity. The texts give an account of multi-cultural and multi-faith societies that have harmoniously coexisted for centuries. For instance, during the occupation of Andalusia, many great religions lived together peacefully.  The Andalusian society of the time was modelled on the society created by Prophet Mohammad during the time he lived in Medina, where all people from different religions as well as non-believers, lived together in harmony. This helps showcase the diverse and inclusive nature of the religion, with peaceful coexistence, and freedom of choice and expression at its core. The scholar also highlighted the central theme of gender-equality that is present within the Quranic texts.

Dr Azmayesh concluded his remarks by stating that all these values are explicitly stated in a chapter on Human Beings, within the Quran, which embodies a résumé of the key principles of equality, peace, spiritual chilavry and respect for human life. The text exemplifies a virtuous society, that is based on the principes of human rights and rights of citizenship, and is in line with the modern democratic society that we live in. These core principles help ascertain the compatibility of human rights and the religion of Islam.

The final speaker was Commander Chishty, who began by giving an account of how to counter extremism and deal with hate crimes. He stressed upon the important role of local communities, who can help solve these problems with the help of the local police and security forces. Trust between all parties or groups of society, is essential for a united front against the challenges posed by extremism. The Commander argued that in order to facilitate this type of trust, an active engagement and dialogue between the police and local community is needed. Furthermore, it requires a level of transparency, to help address concerns, suggestions and outcomes of such community efforts. The Commander stated that the community officers within the communities must take the lead to facilitate this social engagement.

Through such a process, early signs of terrorism or extremism can be spotted and promptly stopped. These signs are often very subtle, and with social and community-level engagement and teamwork, they can be identified and addressed accurately.  Through this type of engagement, the communities themselves can take responsibility for creating guidelines, on how to stop the threat of terrorism. One of the measures the Commander mentioned was ‘Active Safeguarding’, where the communities themselves, through vigilance, spot the early signs of change of attitudes or sinister behaviour.

Mr. Chishty also stated that the communities can help themselves, by actively challenging wrongful interpretations of the Quran, by standing up against misuses of religious texts to incite hate or extremist behaviour. He specifically spoke out against the spreading of conspiracy theories, which undermine the trust of people in security forces, and often create an atmosphere of victimisation within communities, benefitting the extremist agenda. The Commander concluded his speech by highlighting the efforts of several local communities, that have proven to be successful. He urged everyone to take individual initiative, feel empowered, and contribute towards countering social issues such as extremism.

The remainder part of the conference was dedicated to questions from the audience. A key underlying topic of discussion was in reference to building trust between different religious communities. The questions also addressed the issues of certain social practices or legal punishments imposed in some Islamic countries, upon those who convert from Islam to another religion.

The commander in response stated that Islam is about piety and being a good human being and is not about being superior to another person by virtue of being Muslim. All Muslims are accountable for their actions and should not be involved in actions that lead to division. He reiterated that one’s freedom of religion, expression or speech, is a principle that is central to human rights principles in our society, as well as within Islamic teachings.

In response to the audiences’ questions, Dr. Azmayesh stated that we must distinguish between what is written in the Quran from what people call ‘Fegh’, which is a religious law created by the clergy, often based on invented sayings attributed to Prophet Mohammad. These laws are nothing more than dogma’s, and often directly oppose to the teachings of the Quran. He also explained how the Quran is often only regarded as a sacred book, and that it is rarely studied or meditated on.  Therefore, all the problems which relate to intolerance, originate from these type of dogma, presenting an inaccurate and distorted version of the religion which has no semblance to the true prinicples of Islam.

The full event can be viewed: