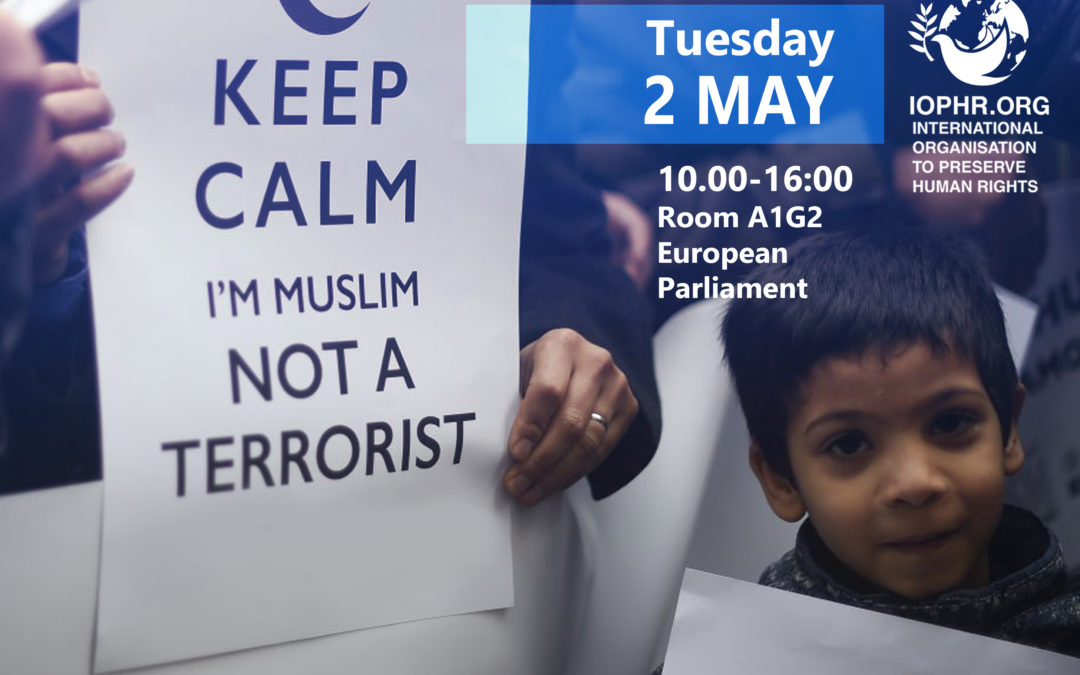 EUROPEAN PARLIAMENT, BRUSSELS – The International Organisation to Preserve Human Rights (IOPHR) held an important all-day event inside the European Parliament under the title of ‘Antidotes to Islamist Extremism’. This event was sponsored and hosted by British MEP Geoffrey Van Orden from the ECR Group, supported by MEPs from the EPP, S&D and ALDE groups.

MEPs of different committees, departments and delegations, together with representatives from various Human Rights Organisations and Governmental Organisations, were attendees of three different panels:

The first panel provided an overview of the topic, focusing on the scale, extent and nature of the problem of violent extremism, the relevance of the issue, why some people are more vulnerable to being radicalised than others, the efforts to counter radicalisation, the CONTEST programme, and the effectiveness of efforts to deal with the potential threat to the security of our society. Key note speaker was EU Counter Terrorism Coordinator, Gilles de Kerchove. Other speakers on the panel were the Head of the Information Management Unit and Chairman of the Local Task-Force on Radicalism in Brussels, Cedric Smeets, Jacopo Bellasio from Rand Corporation and Sonia Farrey speaking on behalf of the UK Embassy Counter Terrorism Section.

The second panel comprised of Gerry Campbell who is a former Scotland Yard Detective Chief Superintendent, Dr. Stephanie Dornschneider, a researcher on violence at the Dublin University, and Dr. Seyed M. Azmayesh, who is a jurist-scholar and an expert on Islamic Misconceptions and Quranic Misinterpretations, as well as the founder of the International Organisation to Preserve Human Rights (IOPHR). This panel looked at the distortion of belief through the interpretation and imposition of “religious” requirements, the “conversion” factor, and the vulnerability of the prison population. Other crucial points of discussion were the lack of individual identity or cultural integration for the immigrant population in host countries, the role of national, international and social media outlets, and the significance of external influences – foreign training of Imams, foreign funding of mosques and madrassas, and the implication of the imposed veil and other similar physical identifications within the Muslim community.

In the third panel, Roberta Bonazzi from the European Democracy Foundation, Dr. Seyed M. Azmayesh and Khalid Amir, gave their views on the nature of radicalisation and the effectiveness of current methods of dealing with radicalisation, and a forward-looking approach for the future in terms of what needs to be done to deal with issues of integration, assimilation, self-identity and alienation. The panel also discussed ways to encourage greater cooperation from vulnerable communities, to encourage “Muslim Democrats”, and most importantly, to protect law-abiding citizens and our open, democratic way of life, from the threats of terrorism and extremism. Closing remarks were given by Mattie Heaven, the Policy and Advocacy Advisor on Islamic Misconceptions and a senior member of IOPHR, as well as MEP Geoffrey Van Orden and MEP Syed Kamall.

Having displayed a broad variety of approaches towards the definition of the current social crisis relating to Islamist violence, and proposing strategies to tackle these problems, the audience brought in some relevant questions and shared their views.

A critical underlying theme during the event was to highlight the core issues of Islamist extremism and identify the sources of the problem. The compatibility of the principles of human rights with the teachings of the Quran was emphasised, along with the historical context of the teachings of the Quran. It was discussed that historically, these teachings were opposed by certain antagonists, during the lifetime of Prophet Mohammed. The core teachings became distorted through inventions by the clerics and those looking for power, who replaced the in-depth studies of the Quran with barbaric traditions and superstitions, by preaching political speeches and propaganda during certain Friday Prayer sermons, rather than giving spiritual talks. These preachers gave speeches based on their specific hidden agenda, using religion as a disguise, and as means to influencing the masses. This problem still prevails today, when preachers from various countries and denominations use Friday Praying for the proliferation of specific political agendas all over Europe, and they fail to base their speeches on principles of the Quran.

Conclusively, the strongest proposals to counter terrorism and to stop young people from falling into the traps of ideologues under the name of Islam, were related to education, and funding of various educational programmes on different levels within society. Furthermore, increased coordination between governmental and civil institutions is imperitive for a well-rounded strategy. The policy-makers, playing a significant role in countering terrorism, must remain proactive and address the several loopholes within existing laws and strategies, which provide too much latitude for misplaced funding, and do not help counteract hate-speeches and backward cultural practices that do not correspond with Human Rights principles.