Are Women’s Rights in Islam compatible with modern society? 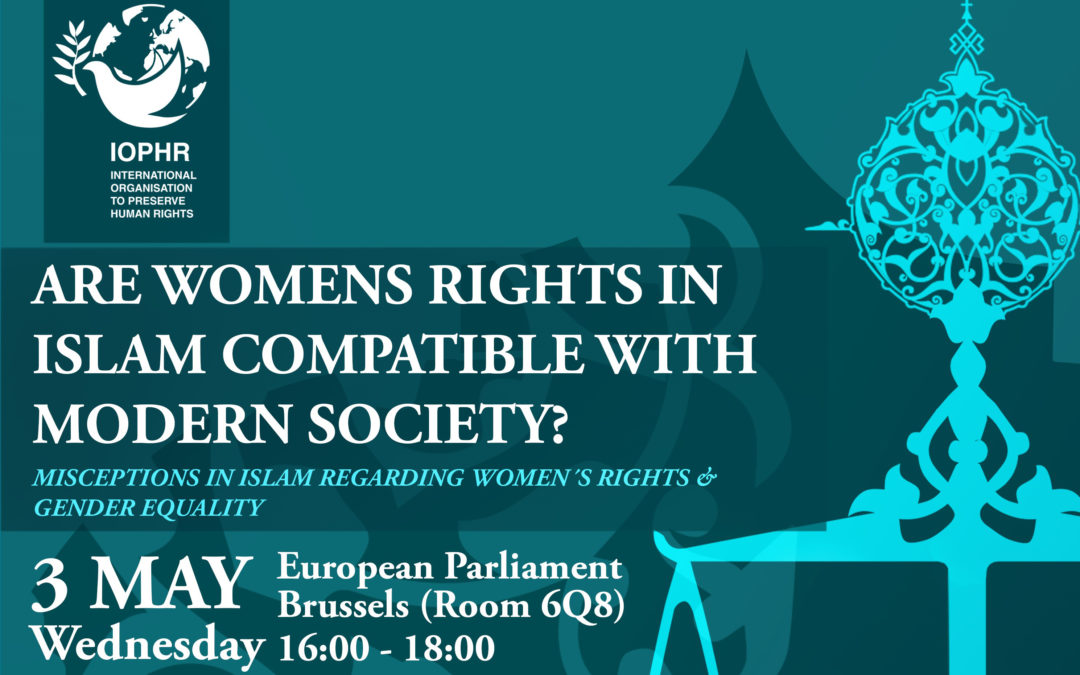 Keynote speaker, MEP Pons stressed on the importance of this event on the complex and sensitive issue and holds the opinion that women should be empowered to talk about this subject while men need to support this cause. Our European fundamental values should be the base for the consensus made in discussions like these. Only when the debate is honest and fair we can discuss otherwise, as I mentioned last year in October the religion is not compatible with our human rights values. Therefore education plays an important role in teaching about human rights including the equality of women and men. We need to realise that sacred texts can be interpreted in a balanced manner or in an extreme manner.

Human Rights activist Mattie Heaven from IOPHR reflected on her personal story as a Muslim woman, growing up in Europe and about the hardships regarding the falsely and misplaced status of women and disrespected gender equality in Islam due to misinterpretations of the Quranic texts by the clergies through times. She discovered, what clerics and religious authorities had made up, were aspects of a patriarchal world opposing the principles of the Quran. She spoke on the role of the veil for women, which is not imposed by the Quran at all as well as the importance of looking with experts into the context and meaning of the Quranic teachings to prevent further misjudging of the Islamic belief.

MEP Julie Ward, member of the committee on Culture and Education and the committee on Women’s Rights and Gender Equality mentions the important role that many of her Muslim women friends play in education, science and cultural integration and confirms that of course, as all other religions, Islam is compatible with modern society and human rights. She refers to her report of 2016 which she wrote on the role of the intercultural dialogue in diversity education and fundamental European values which is a policy frame work meant for the member states of Europe.

Former Scotland Yard Chief Detective Superintendent Gerry Campell is Advocate for Community Safety and Engagement, tackling Violence Against Women, Forced Marriage, Femal Genital Mutulation and Hate Crime. In his speech he points out that not only should men talk less and give more space to women’s voices, also there is a need to discuss men’s attitude towards women’s rights and gender equality. His speech was devoted to the girls that were killed in the UK and Europe for the so called ‘honour’. We all have the obligation to find a solution to stop crimes as these. He appeals for the change within the communities that needs to take place to stop the gender inequality. Men and boys have an important role in gender based violence and must step up to challenge the men and boys that live these visions. The Big Brother movement is to support the Big Sister movement, helping to end violence against women and girls globally empowering the UN’s sustainability goal for 2020.

Vice Chair of the subcommitee on Human Rights and member of the committee on Women’s Rights and Gender Equality MEP Beatriz Becerra Basterrechea sees the problem in the non-tolerance towards free interpretation of the Quran by the radical Islamist groups. Why does the Quran need an interpretation in 2017? Are adult Muslims not able to read and understand a holy book by themselves? Does the Islam consider that all human beings, men and women are equal and have the same universal rights? Why doesn’t a unified Islamic interpretation exist, as there was for the bible in the 4th century? Could there be a unified Islamic authority that could validate it? If a unified version of the Islam would be worldwide respected the multiple threats related to the interpretation of the Quran will be deactivated. The declaration signed in 2016 in Marakesh has been a positive attempt to prevent further radicalisation within the Islamic communities. There members of a multitude of Muslim communities from all over the world came together and confirm that the declaration of Medina from the 7th century and the UN Charter of human rights state both the validity of the  universal and equal rights of citizen.

Jurist Scholar and expert on Quranic misinterpretations and Islamic misconceptions, Human Rights activist and Founder of IOPHR, Dr Seyed Mostafa Azmayesh mentions that we must differentiate that the violence that exists today under the name of Islam has nothing to do with the original teachings of the Quran and the Islam which confirm gender equality. He is author of the book New Researches on the Quran and in his speech today he starts explaining the question “Why and how two versions of Islam entered the history of mankind?”, the subtitle of his book which is an in depth scientific excursion on the history, language and context of the Quran and about the life of Prophet Mohammad.

It shows that during the life time of Prophet Mohammad, two opposite versions of Islam were born which exist until today. The place where Prophet Mohammad was propagating the teachings of the Quran, the Arabian Peninsula, was inhibited by the Bedouin who were very attached to their tribal traditions which were based on patriarchal behaviour. They resisted the teachings of the Quran and rejected the appeals of Prophet Mohammad who was confronted by a multitude of marshal attacks against him and his community. After the victorious entry of the Prophet and his companions inside of Mekka the majority of those Bedouin accepted to convert verbally to Islam, however they remained attached to their tribal traditions.

From that moment they started not to reject openly the teachings of the Quran, but they accepted the Quran according to their own interpretations and they built the mosques in order to lead the prayer and to preach and brain wash the audience and to propagate the tribal traditions under the name of Islam. Half of the verses of the Quran is talking about this group of people which are named the false Muslims or hypocrite people. This group of people took power after the apparition of the Omayid dynasty inside of the history under the name of Islam.

It is a matter that people don’t respect women’s rights in society, but worse than this is that some people do this as a legitimate action because they relate their tendency to Islam and they pretend to be not respectful to the rights of women because their religion dictates this. This is the problem.

There are many verses written in the Quran that most of us don’t know about as for example 310 verses in the Quran are consecrated to the space, sky, the cosmos with the stars, the sun and planets etc. However, is there any verse that exists about the imposed hijab in the Quran? Sadly, people make up the whole religion of Islam based on this principle. It is necessary in this modern time to discover the importance of the place of the social contracts inside of the teachings of the Quran.