Iran: A Free Democratic Country or a Dictatorship Without Borders? 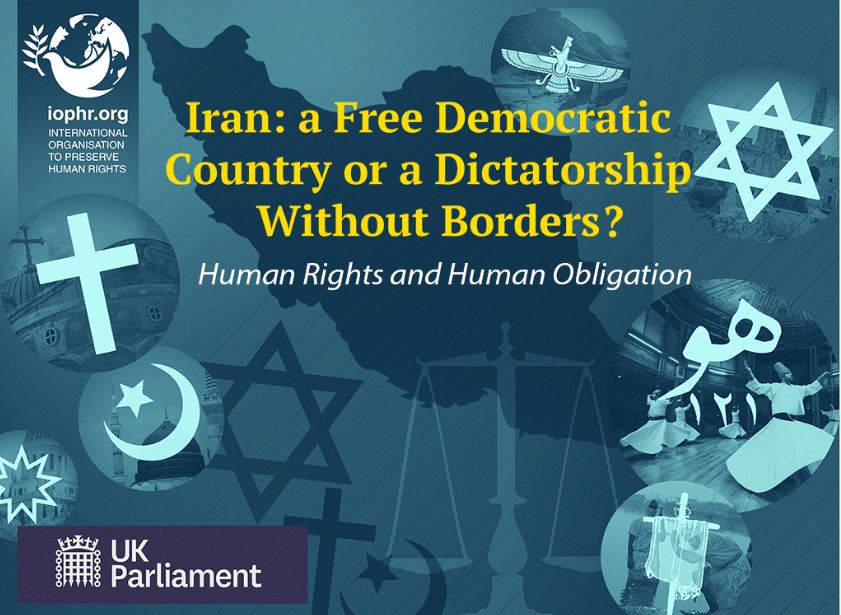 LONDON – On the 2nd of July 2019, the International Organisation to Preserve Human Rights with the sponsorship of Bob Blackman, MP, held an important event on human rights violations of the Iranian regime within the UK Parliament, under the title of:  “Iran: A Free Democratic Country or a Dictatorship Without Borders?”.

The panel of speakers at this event included: Mr. Bob Blackman MP, Professor Javaid Rehman, UN Special Rapporteur on Human Rights in Iran, Mr. Richard Ratcliffe, husband of Mrs. Nazanin Zaghari-Ratcliffe, British-Iranian dual national who was arrested and has been held in Evin Prison of Iran for the past three years, Ms. Mattie Heaven, Policy and Advocacy Adviser for IOPHR on Counter Radicalisation and Extremism, women’s rights and human rights activist, Dr. Hamid Gharagozoloo, US representative of IOPHR and human rights activist, and Ms. Simin Fahandej, representative of the Baha’i international community’s office in Geneva to the UN.

The event began with Bob Blackman, the chairman of the event, speaking about the pain and suffering that the Iranian regime has inflicted on its citizens and its neighbouring countries over its 40 years rule.

The second speaker, Richard Ratcliffe spoke about the unjust imprisonment of his wife in Iran on baseless trumped up charges, and the support he has received from all Iranians both in Iran and outside in his efforts to free his wife. He also talked about the plights of other political prisoners who share the same unjust fate of his wife in Iranian prisons.

The next speaker at the event was Professor Javaid Rehman, who spoke about the unjust constitution of Iran that openly discriminates against, and oppresses non-Muslims, in particular Baha’is and Christian converts. He also discussed the biased ways by which Iran’s Judicial System implements the Iranian Penal Code, and that many executions are carried out on the basis of minor crimes and also the numerous child executions which occur in Iran, even though Iran is signatory to UN Human Rights Conventions prohibiting the executions of minors.

Following Dr. Rehman, Ms. Mattie Heaven discussed how in reality every Iranian citizen who disagrees with the extremist ideology of the Iranian government, is a persecuted minority as the regime readily discriminates, and oppresses anyone who it deems as a threat to its survival. This includes women who stand up to the regime’s misogynistic policies and also, even Muslims like Sunnis and Sufis who do not follow the regime’s extremist interpretation of Islam. She also highlighted the case of Mr. Salas, a Sufi who was executed on false accusations and charges in June 2018, after a speedy trial without due process. She ended her speech by stressing that “Extremism should not be tolerated in any form, and the Iranian regime is the very definition of extremism and its policies must be countered at every turn. As its policy is one of spreading falsehoods, in particular when Gholamhossein Esmaili who is the Director General of Tehran Province Justice Department, openly stated recently, that there are no political prisoners in Iran, when clearly there are thousands who are imprisoned simply because of their views and ideas.

The next speaker was Dr. Gharagozloo who spoke about the Iranian regime’s 40 years of suppression of its citizens and undermining its neighbouring countries’ governments, and being behind many terrorist activities within Middle East and the rest of the world. He stressed that the only thing the regime responds to is financial pressure and that US sanctions are working as they are cutting the vital lifeline to the regime, and European countries should also resume their sanctions as the regime cannot be trusted. Thus, the Europeans by trading with Iran are allowing a regime that openly oppresses its citizens and supports global terrorism, to survive; and the Iranian regime will do anything to survive and that includes building nuclear weapons. He also stated that 40 years of tyrannical and devious policies of the Iranian regime should teach the world that the Iranian regime will not reform, as reform of any kind is an existential threat to its very being.

The final speaker was Ms. Simin Fahandej, who spoke about how the rights of Baha’is are constantly violated in Iran. As they have no standings within Iranian constitution and they are constantly being oppressed and discriminated, both in higher education institutions and in employment spheres. Moreover, their houses and workplaces are constantly raided, and their leaders are imprisoned, and this suppression is simply there, in order to force them to convert from Baha’ism to the extremist ideology of the regime. This policy of oppression, which has lasted for 40 years, had taken immense toll on the Baha’i community.

And visiting Press were interviewed on their opinion: