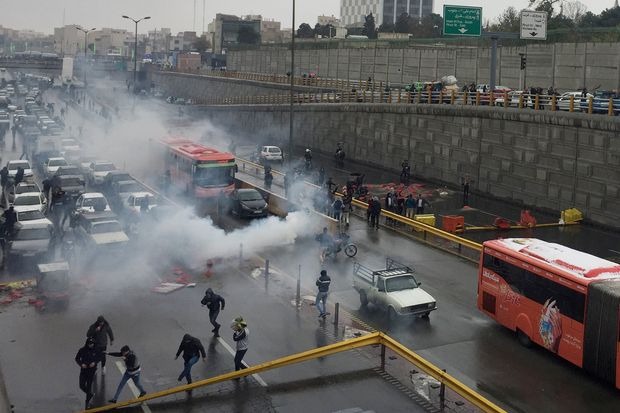 It has been more than three weeks since the Islamic regime of Iran started its new phase of naked violence and aggression towards its own people, by brutally suppressing the peaceful demonstrations of the Iranian people, against the threefold rise in gas price, through targeted killings and murders of its citizens, especially its youth and teenage protestors.

To hold peaceful demonstrations is a recognized right of all Iranian citizens, under the current Iranian constitution, and officials within the Ministry of the Interior, are also responsible for ensuring the safety of all citizens during demonstrations. Therefore, the Iranian regime’s shooting of defenceless protestors lacks any legal authority, or legal justification. Consequently, there is an urgent need for international prosecution of the perpetrators of these hideous crimes.

Given the recent actions of the Iranian authorities, in viciously suppressing the demonstrations through brutal killings of the demonstrators and given the appalling dimensions of the killings, makes all these abhorrent acts worthy of being considered as “crimes against humanity”.  Therefore, the shooters, and the officers generally affiliated with the Quds Force, who are associated with these crimes, must be brought to justice immediately. The ministry officials of the Islamic Republic, who are responsible for ensuring the safety of its citizens and the high-ranking officials of the Islamic Republic, who are accused of “crimes against humanity” must all be tried in international courts.

IOPHR (the International Organisation to Preserve Human Rights) notes that what is going on in Iran, should not be viewed as a purely internal matter, but directly relates to the peace and security of the international community. The Iranian regime, who is a signatory of the United Nation’s human rights charter, must be forced to answer for its crimes, through the development of a global consensus on its inhumane actions carried out by the Iranian regime, against its own citizens, which are summarised in the following points:

Unfortunately, the unjustified procrastination and delay of the Iranian officials towards implementation of FTAF, anti-money laundering protocols, and the unjustified extension of Iran’s deadline for transparency in regards to its financial operations, has provided a golden opportunity for the corrupt officials of the Islamic Republic, to transfer their vast wealth, which is held in public accounts, to their personal accounts. All of which, will increase national poverty and push Iran further up the international index of misery, which in turn has fuelled the widespread discontent behind the popular protests.

In view of the foregoing, IOPHR urges the European Union member states, in particular the Union’s foreign policy apparatus, to urgently restrict or shut off all diplomatic and business relations with the tyrannical Iranian regime, as a form of protest against the regime’s inhumane actions against its own citizens. Secondly, it also calls on the European foreign policy apparatus to condemn the crimes of Iranian authorities, in order to demonstrate their adherence to fundamental and accepted principles of human rights.

Moreover, IOPHR calls on other governments, in particular UN Security Council member states, in view of the undeniable acts of violence by the Iranian authorities inside and outside the country, particularly in the Middle East and North Africa, and the threat the Iranian regime represents to international peace and security, resulting from these actions and in accordance with Articles 39, 40 and 41 of the Charter of the United Nations, to put the despotic and inhumane actions of the Islamic Republic’s system on the agenda of the Security Council for immediate review.

IOPHR, will in turn, take all necessary steps to establish and pursue “charges against humanity” in international legal forums against the authorities of the Islamic Republic of Iran in order to hold them to account in fair international tribunals or legal proceedings.