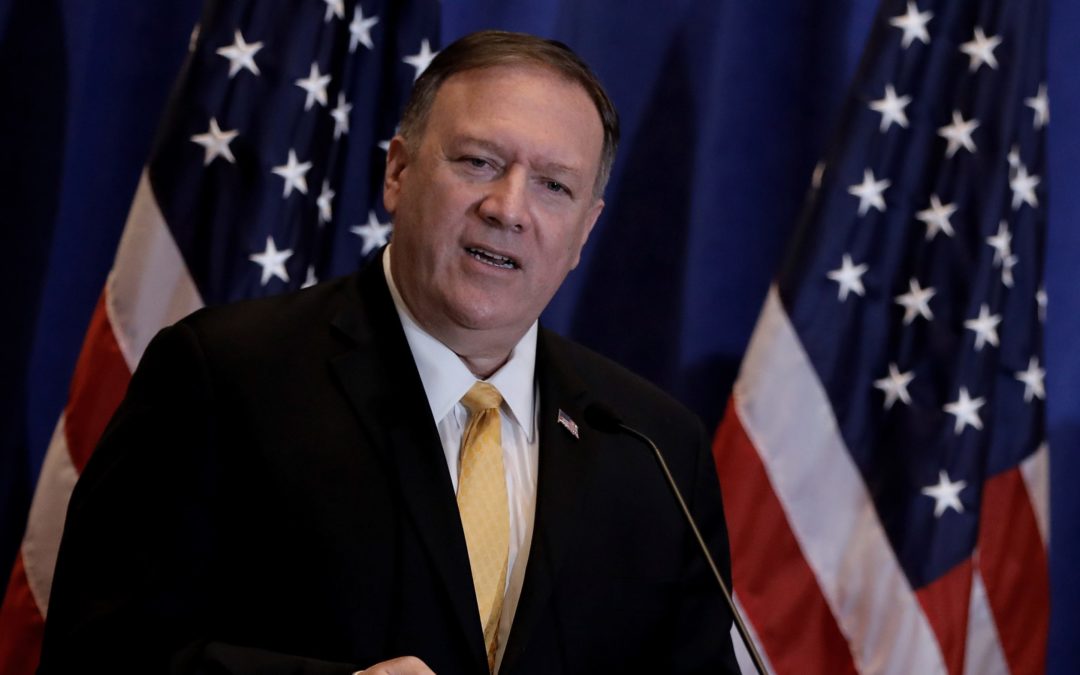 IOPHR wrote an open letter to Mike Pompeo, Secretary of the State of the USA:

“I will not take up your valuable time by repeating facts you already know, better than most do. I would only like to take this opportunity to implore you and the international community not to abandon the citizens of Iran, particularly in the current circumstances. The Islamic Republic is not a government that is chosen freely by its citizens and all elections carried out by this regime have been undemocratic and tainted by corruption, fraud, and manipulation and thus are invalid.

In the absence of a free national referendum conducted under the scrutiny of international observers, such as the UN or EU inspectors, the current Iranian regime has neither national nor international legitimacy. The large numbers of political detainees, the brutal suppression of protests, the facade of elections, the shirking of public responsibility, together with the dual power structure within Iran, are only some of the clear signs of illegitimacy of the Iranian regime inside of Iran. Other irrefutable indicators include the regime’s non-compliance with international obligations, its irresponsible behaviour through the creation of international tensions and instability across the world, and the misusing of diplomatic immunities seriously challenge the international legitimacy of regime.

As you no doubt are aware, the Iranian citizens are also the innocent victims of inefficiency and incompetency of their government in regards to the Wuhan Virus (COVID-19) epidemic. A staggering number of Iranian citizens have been infected by the outbreak, and we estimate that the real number of causalities – just like in China – is approximately ten times greater than what is publicly stated by government statistics.

Moreover, the officials of the ruling regime in Iran are also legally responsible for this epidemic, as they intentionally hid the first cases of the disease, in order to celebrate the anniversary of the Islamic Revolution on 11th February. This they celebrated, by allowing and encouraging the gathering of large crowds in the streets, all the while fully aware of the dangers these gatherings presented for the Iranian citizens, and the entire world. Furthermore, the Iranian regime is also legally responsible for not implementing the obligatory scientific directives of the World Health Organization. This disregard may also have been intentional in order to increase the number of casualties, through which they could then obligate the international community to reduce the sanctions and international restrictions imposed on the regime.

Unfortunately, the officials of the Iranian regime have for years now taken advantage of the passive response of the international community toward the regime and its actions. Unbelievably, they have never been held accountable for their crimes, including for a number of very infamous cases such as the ‘Lockerbie bombing’ or the ‘Mykonos restaurant assassinations’ and many other similar cases. The recent and intentional shooting down of the Ukraine International Airlines Flight 752, shortly after take-off from Tehran International Airport, is just one of these recent horrific cases.

Furthermore, it is undeniable that tens of thousands of innocent people across the world have lost their lives due to the unlimited governmental support given by the occupying regime in Iran to large terrorist groups like Al-Qaeda, the Taliban, Al-Shabab, and even ISIS, who for a time enjoyed the use of resources that rightly belonged to the Iranian citizens.

Fortunately, however, thanks to recent restrictions and sanctions, the Iranian regime has recently been under pressure, as its financial resources have been drained, and the regime is now forced to beg from or cheat its own people.

In this regard, IOPHR would like to draw your attention to the dual power structure within the ruling regime of Iran: the first of which is the nation-state structure utilized to deceive the international community and take advantage of diplomatic facilities, and the second of which is its borderless, fully-authorised structure for extending the boundary of influence of the Iranian clergy across the globe, in the hopes of eventually establishing a regional or even trans-regional Khalifate.

IOPHR also would like to point out that freeing the Iranian citizens from the clutches of the occupying regime in Iran without the assistance of the international community is no easy task. The regime’s officials already possess formidable external and transboundary resources, such as terrorist brigades, which they have organized for years in other nations such as Iraq, Afghanistan, Lebanon and Yemen and have consistently employed to suppress the civil protests in Iran.

IOPHR would thus like to draw your attention to the critical situation facing Iranian citizens, who are now facing rampant disease and an intentional disregard for globally-accepted health protocols, in addition to a lack of freedom and ubiquitous governmental corruption, all under a tyrannical dictatorship. As the current Wuhan Virus (COVID-19) crisis in Iran unfolds, international peace and security may also be jeopardized. Therefore, IOPHR calls on all free and democratic countries to form an international coalition, under the directives of the United Nations, to help the Iranian citizens overcome all of the above-mentioned issues.

IOPHR further requests, as a matter of extreme urgency, that ‘all means possible’ be considered to find a way to directly deliver medical equipment to the hospitals and Iranian citizens within Iran, and to bypass government-controlled channels, such as a possible ‘Air Lift’. IOPHR strongly believes that disregarding the above concerns can potentially result in a humanitarian catastrophe in Iran and beyond.”