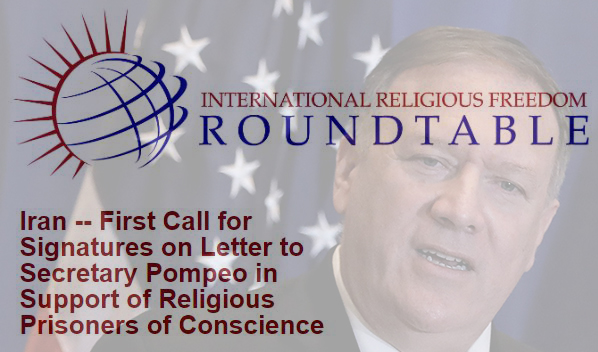 In an open letter The International Religious Freedom round table requests signatures on a letter addressed to US Secretary of State Mike Pompeo to support the religious prisoners of conscience in Iran.

The full text of the letter and the means of signing the letter can be seen below:

Please see below from Baha’is of the United States and International Organization to Preserve Human Rights regarding a multi-faith letter in support of religious prisoners of conscience in Iran:

“As you are aware, the COVID-19 pandemic has created a particularly dangerous situation for prisoners. Perhaps nowhere is this more true than in the Islamic Republic of Iran, where Baha’i, Christian, Gonabadi Sufis, and other religious prisoners languish in Iranian jails in crowded conditions.

“We are deeply worried about the safety of these prisoners and ask you to join us by signing the attached letter to Secretary Pompeo to call on the Iranian government to release all religious prisoners of conscience and to reach out to U.S. allies to express their concern making it clear that detaining such innocent individuals during a pandemic demonstrates a particularly reckless disregard for human rights and human life for which Iran’s government should be held accountable.

TO INFORM YOUR DECISION