Industrial Strike is Not a Crime – IOPHR statement 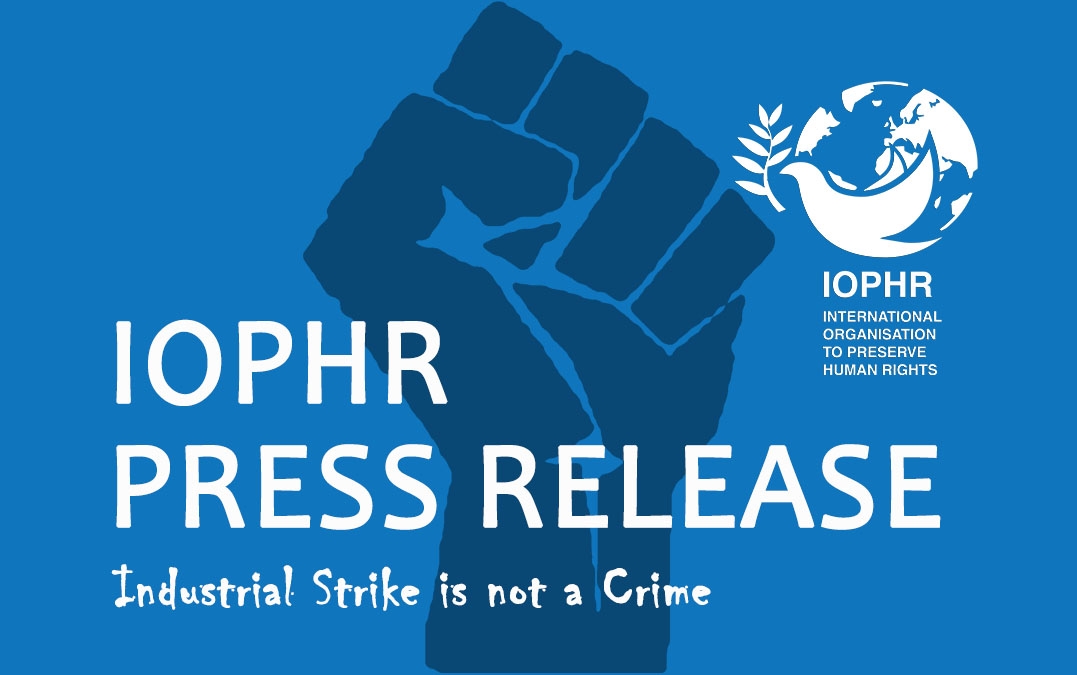 The statement of the International Organisation to Preserve Human Rights  (IOPHR) in connection with the general strike of the Iranian people.

Industrial Strike is Not a Crime:

For striking is the legal right of all citizens!

More than two months have passed since the beginning of the nationwide strike of the oppressed workers and employees of Haft Tappeh Sugarcane Cultivation Industrial Company. The strikers’ demand is nothing more than their legal right: to be paid all their overdue wages!

During this period, more than fifty other trade unions, and social organisations have joined this strike, such as the oil and gas, and petrochemical workers in various cities. All in the hope of national protest movement or a general strike, in order to achieve their legal rights, and force the authorities to meet the outstanding demands of the Iranian people.

The use of a nationwide strike is the least costly way to realise the rights, and interests of the unions, and Iranian citizens. That is why in all developed, and civilised countries, going on strike is recognized as a legal right, and strikers are never attacked or prosecuted.

Even in the introduction of the current Iranian constitution, the use of strikes has been implicitly endorsed, as a legitimate means of exercising workers’ rights.

In fact it was through the use of protest movements such as nationwide strikes that took place during 1978, in which the leaders of these movements called on the people to strike, which resulted in the current Iranian regime coming to power.

As a general strike is a sign of unity, solidarity, cohesion and empathy of the Iranian people with varying demands against the same forces of oppression, represented by the current Iranian regime.

For the managers, operators and owners of factories such as the Haft Tappeh sugarcane factories, whose workers have gone on hunger strike, are purely rent-seekers who use government payments for personal benefits. Through, the transfer of diverse amounts of public wealth to their own personal accounts, and to those of their families abroad. These controlling group have not only  transferred vast sums to their own personal accounts, but it seems their greed has no bounds, as they have even resorted to stealing the wages of their employees, who have worked hard for them and their families during the period of unbridled inflation.

Unfortunately, the regime of the Islamic Republic has shown many times that it has no will to improve the living conditions of its citizens, and thus the people must act for themselves.

In this situation, the general strike is the only possible tool to save the Iranian nation from this torrid situation, which they find themselves in, and did not create.

The IOPHR, while strongly and unconditionally supporting the nationwide strikes of the Iranian people, invites all human rights activists around the world, especially Iranians living abroad, to contact the labour organizations of their place of residence, and through explaining the legitimate demands of Iranian citizens, attract the backing, and solidarity of trade unions around the world in the support of the Iranian people.

Obviously, such a move would lead to public pressure on pro-democracy governments, especially EU member states, to reconsider their relationship with the government of the Islamic Republic, thus easing some of the pressure on the Iranian people.

The IOPHR also draws the attention of the world public opinion, especially the awakened consciences, to the fact that the Islamic Republic’s failure to comply with the minimum legitimate demands of its citizens automatically undermines the “legitimacy” of the current regime in Iran. Consequently, the current Iranian regime should by no means be considered the real representative of the Iranian people on the world stage.

In conclusion, the IOPHR warns the leaders of the ruling regime in Iran to closely monitor all their actions, and given that the legal responsibility for protecting the strikers lies with the security forces. For the Iranian regime should be aware that any faults, or negligence in this relationship, will no doubt be immediately reported in detail to the relevant international community.