IOPHR statement regarding the summoning, and detention of Ms. Mehraveh Khandan the daughter of Ms. Nasrin Sotoudeh 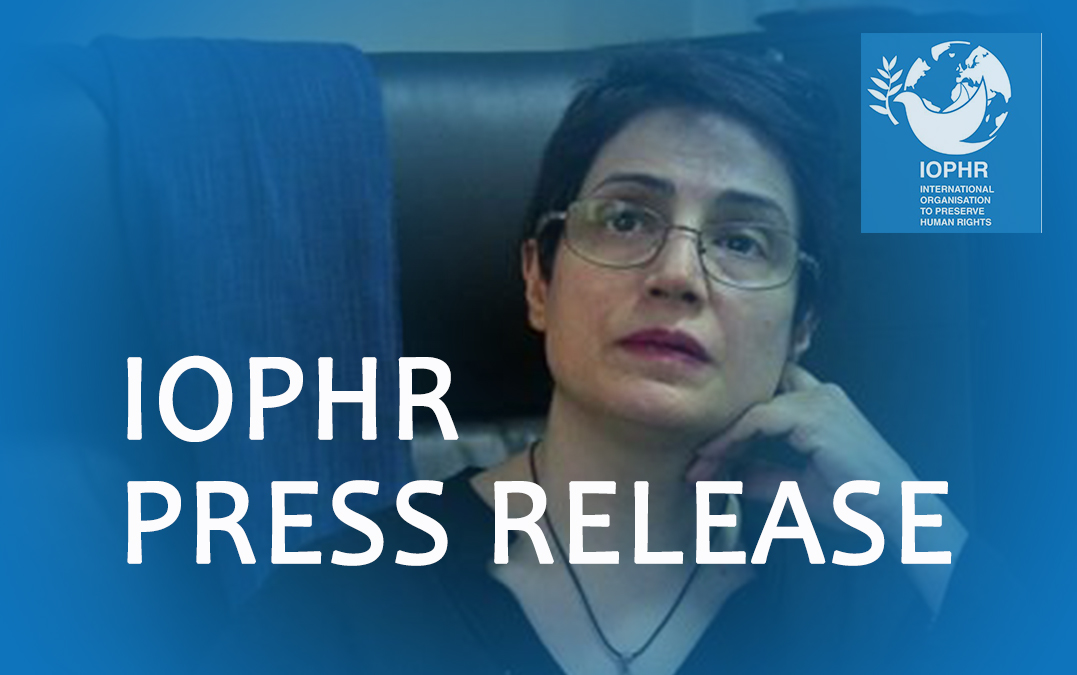 The tyrannical regime in Iran, with its long history of violation of the rights of Iranian citizens, including dissidents, LGBT community, lawyers, religious minorities, Sufis, journalists, environmental activists, women, children, and more recently dual nationals is now extending its list of human rights violations in a entirely new way. As now the Iranian regime, in order to break the resistance of political prisoners, who are imprisoned purely for protecting the rights of their compatriots, has started to put direct pressure on the families of political prisoners, especially their children.

One of the most prominent examples of such behaviour, is the blocking of Ms. Narges Mohammadi’s telephone contact with her children from prison, and the unjustified arrest, and the sentencing of Mr. Ali Nourizad, the son of Mr. Mohammad Nourizad – a political prisoner, sentenced to four years in prison. The latest example of this type of action is the recent summons and the detainment of Ms. Mehraveh Khandan, the 20-year-old daughter of Ms. Nasrin Sotoudeh, a lawyer who has been on hunger strike for some time in prison, in order to protest the violations of the rights of political prisoners.

Unfortunately, the response of the authorities of the ruling regime in Iran to the legal demands and the rights of human rights defenders, has only been to intensify the regime’s pressures on Iranian citizens, through even more intrusive violations of their rights.

Undoubtedly, Ms. Mehraveh Khandan will not be the first, nor the last example of such widespread human rights violation in Iran. As Ms. Mehraveh Khandan’s unjustified summoning, who is also a scientific prodigy, is another example of the Iranian regime’s mental torture of her mother Ms. Nasrin Sotoudeh, the famous human rights lawyer. Nasrin Sotoudeh’s imprisonment is itself yet another clear sign of the brutal misogynist, and despotic leadership of the ruling regime in Iran.

Accordingly, the IOPHR calls on all Iranian citizens to unite, and not to abandon the rights of their  children, by holding peaceful rallies in front of prisons across the country, calling for the immediate release of all political prisoners, especially those defending fundamental human rights, who are suffering imprisonment, and torture as a result.

The IOPHR also likes to draw the attention of all pro-democracy governments around the world to the exceptional, and complex human rights situation in Iran, and calls on them to address this global dilemma at the UN Security Council and for joint international action to end this illegal, inhuman, and painful situation in Iran.

The IOPHR also calls on all human rights activists around the world to put pressure on their governments to suspend all economic, and political relations with the Iranian regime, until the human rights situation in Iran is fully resolved.

In conclusion, the IOPHR would like to draw the attention of MEPs to the precarious situation of Ms. Nasrin Sotoudeh, and other political prisoners, including Ms. Narges Mohammadi and Mr. Mohammad Nourizad and his son Ali Nourizad and other political prisoners in Iran. In the hope that international bodies such as the European Parliament, and the United Nations, both pass human rights sanctions against human rights violators in Iran.