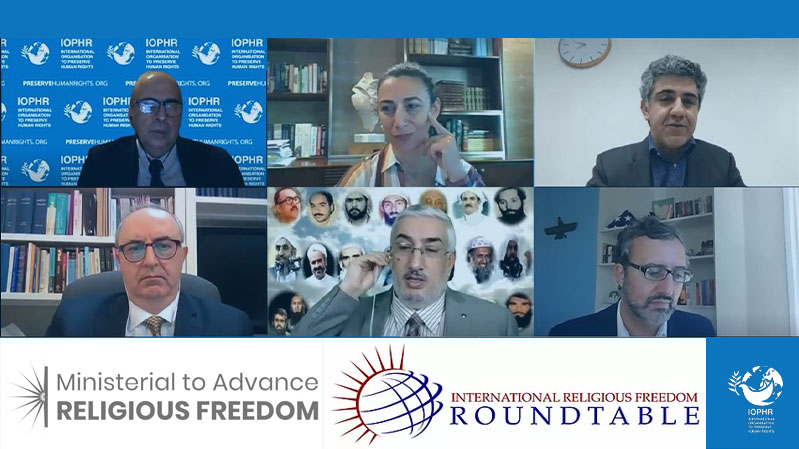 The event began with a discussion on the erroneous claims of, Iran’s ruling regime which has claimed Iran having a population of up to 90% Shia Muslims, whereas in contrast, Iran is made up of diverse groups of religions and ethnic groups, all of whom are continuing to be oppressed, without the most basic citizenship rights.

The first speaker at the webinar was Alireza Nader, Senior Fellow at the Foundation for Defence of Democracies and expert on Iran, who began his speech by commemorating the November 2019 mass protests in Iran, where according to his data, around 1500 to 8000 protestors lost their lives, when the regime forces gunned down the innocent protestors. Mr Nader then discussed the totalitarian nature of the Iranian regime, which lives in constant fear of any type of organised protest, even from small minorities like Baha’is, with a population of about two hundred thousand.

Furthermore, he stated that the regime is intolerant of any group, which does not share its fundamentalist agenda, even if that group is made of Shia Muslims, such as the Gonabadi Sufi Order, with population of around 8 million. Even independent charities like Imam Ali Foundation, which is not part of the regime, has experienced severe pressure and has been almost completely shut down by the regime.

Mr Nader also stated that the recent US election creates a critical time for the Iranian regime. As any return to the negotiation table by the US government with Iran, will invariably be at the cost of human rights in Iran. As the US negotiators will in all likelihood sacrifice human rights of the Iranian people in the quest for a nuclear agreement.  That is why he insisted that all human rights NGOs speak up at this time, so that the US administration does not remove human rights from the negotiation table. He also stated that the current Iranian regime is ultimately unreformable and only by people being able to express their views and their rights being protected, a peaceful transition to a new Iranian regime can take place.

The second speaker at the event was Ebrahim Ahrari Khalaf, Iranian Journalist and Presenter of Kalameh TV, with 1.5 million viewers, and representative of the Sunni community in Iran. Mr Ahrari in his speech stated that contrary to Iranian government’s official numbers, the Sunni community makes up as much as 25% of the Iranian population (approximately 20 million) across all provinces of Iran. He then outlined the regime’s 40-year record of suppression of Sunni community through oppression, assassinations, and executions.

As an example of this suppression, he stated that Tehran province alone has two million Sunnis, and yet there is not a single Sunni mosque in Tehran. The only mosque belonging to Sunni community was destroyed by the regime decades ago, and thus Tehran is probably the only global capital city without a Sunni mosque. In his speech he also outlined the mass oppression of Sunnis during the last 40 years, by presenting a multi-decade list of Sunni activists, religious leaders, doctors, professors, and scholars, all of whom were either assassinated, executed or murdered under suspicious circumstances, or are missing without any trace of their whereabouts.

According to Mr Ahrari, the systematic suppression of Sunnis extends to organised discrimination which prohibits Sunnis from taking governmental posts, or having any form of media outlets like newspapers, or dedicated media channels.

The third speaker at the webinar was Mr Mansour Borji, Journalist from Article Eighteen, who spoke about the plight of the Christian community in Iran.  He began his presentation by stating that contrary to the Iranian constitution, which gives some rights to Iranian Christians, in practice, these rights are severely restricted or are non-existent.  As in practice, only Armenians have limited access to the stated rights, and these rights are not extended to Christian converts.

So even when Iran by virtue of signing the international human rights conventions, which allows individuals to change their religion, in practice, conversions are frowned upon, and people who convert to Christianity are placed under severe pressure.

He also stated that, even recognised minorities, which do not allow conversions, face discriminations in employment. Especially regarding law matters, e.g. during inheritance settlements and in giving evidence in court cases, where evidence of non-Muslims against Muslim defendants are always ignored.

Mr Borji also stated that even Christian worship ceremonies are restricted and people who take part are often arrested.  As he stated that for example, even when non-Muslims, who, under the law are allowed to drink alcohol, in are in fact jailed and flogged as a result of this act. Even if the person is drinking communal wine during the act of Christian communion, as shown by cases like those of Christian Convert, Zaman Fadaei, who was flogged and given a six-year prison sentence.

Mr Borji further stated that often converts are arrested under national security charges, because they are forced to gather for their worship ceremonies in underground churches, which have been built in their private houses, as they are not allowed to have their own churches.  Therefore, the systematic oppression of converts and Christian minorities, just like the cases for all other religious minorities, is sadly widespread in Iran.

The fourth speaker at the event was Afshin Sajedi, IOPHR European Representative and Legal Advisor. In his speech, Mr Sajedi stated that the Iranian policy towards religious minorities in Iran, is actually a global threat that the regime carries out as part of its calculated strategy. While for example Sunnis in Iran are stripped of their rights and are oppressed, in other countries the Iranian regime is happily investing millions to build mosques for Sunnis outside of Iran. It sees this as part of its plan to garner influence within the Muslims community outside of Iran in order to propagate its extremist version of Islam.

Therefore, while the Iranian regime oppresses internally all religious minorities that don’t agree with its fundamental agenda, it is actively recruiting minorities outside of Iran, as part of its clandestine plan to garner international influence. As the regime’s ultimate agenda is to control, and build a global network of influence for propagating its ideology.

Consequently, their internal systematic suppression is not just against non-Shia Muslims, as the regime has consistently oppressed Gonabadi Sufis, who are Shia Muslims who oppose the extreme agenda of the regime and are a tolerant and peaceful group. That is why their leader, Dr Noor Ali Tabandeh was placed under a two-year lasting house arrest, replacing his attendants by Iranian agents and was ultimately killed by the agents of the regime through slow administration of poison.

Mr Sajedi also stated that any view that doesn’t follow the regime’s line of ideology, will always be suppressed, which is why religious conversion is not allowed, and in particular, conversion to Christianity is potentially punishable by death.

The fifth speaker at the event was Ms Sharon Nazarian Ph.D., ADL (Anti-Defamation League) Senior Vice-President for International Affairs. Ms Nazarian spoke about the need for creating a task force in the Middle East to combat religious oppression, and in particular in Iran which is the number one sponsor of global terrorism and anti-Semitism. She also stated that the regime often uses the Jews as scapegoat for many situations, in order to spread hate and violence against the Jews, for example the recent propaganda campaign in Iran blaming the Jews for the COVID-19 pandemic. Or giving the best animation and cartoon prize in Iran to cartoons that deny the holocaust.

Ms Nazarian also identified that the regime through its support for terrorist organisations like the Hezbollah, is actively spreading anti-Semitic propaganda within the region, while internally they embed the same messages in the school textbooks by representing the Jews as Zionist spies.

The last speaker of the webinar was Farhad Sabetan Ph.D., Research Economist, and Spokesperson for the US Baha’i community.

He began his talk by stating that this month alone, 74 individuals from various religious minorities have been arrested in Iran, 26 of whom were Baha’is. He also stated that the arrests and oppression of Baha’is are widespread in Iran. They are symmetrically excluded from education and employment opportunities, and their assets such as land are regularly confiscated, and their burial sites are desecrated.

Mr Sabetan stated that based on 1991 internal regime documents, the regime has a clear plan to stop conversion into Baha’i faith and suppresses all Baha’i activities. In this vain the regime has executed at least 200 Baha’is thus far, as a means of spreading terror and oppression among Baha’is in Iran.

The event ended with a Q&A session in response to which Mr Nader stressed the importance of international pressure in regards to the behaviour of the Iranian regime, in order to allow for a peaceful change in Iran. While Mr Borji also stated that religious freedom is an essential ingredient for the peaceful transition to a new regime.  Moreover, Mr Sabetan stated that the promotion of cultural and human rights in Iran is paramount, as only through the idea of oneness, Iranians can overcome years of division and oppression. Mr Sajedi on his part promoted the importance of full diplomatic sanctions on all Iranian embassies and Iranian associated groups, in order to stop the regime achieving its fundamental agenda.  Ms Nazarian closed the Q&A session by stressing the importance of collaboration amongst all human rights groups, and a task force dedicated to a strategy that brings pressure on the European and US governments in order to attain human rights for all Iranian citizens in Iran.

A video of the complete event :