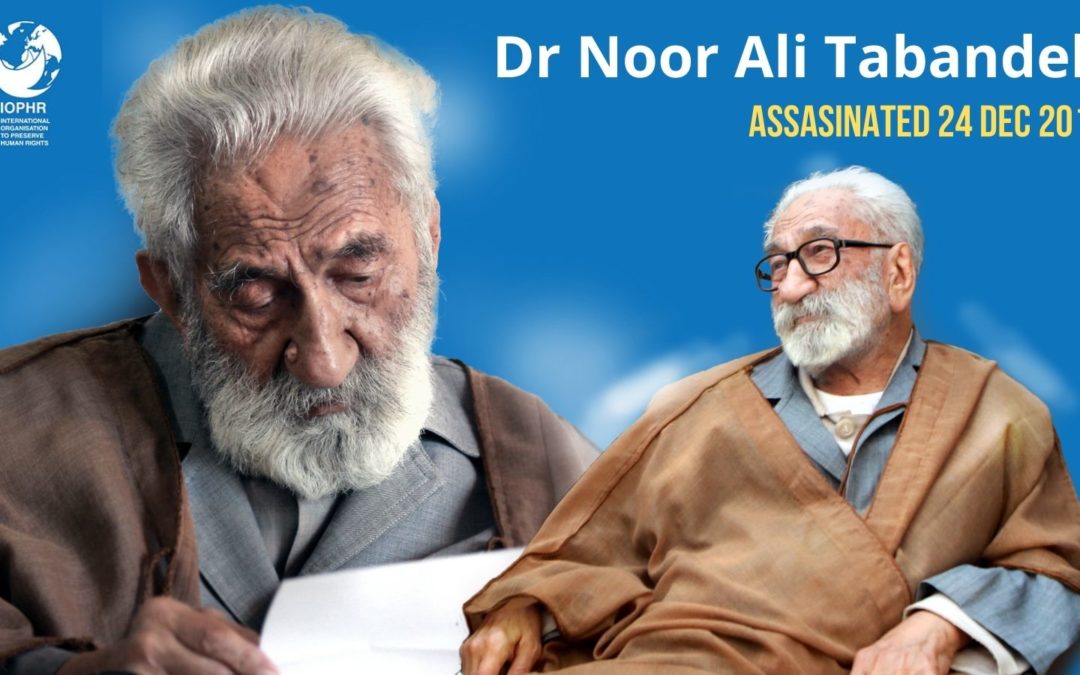 24th December 2020, is the first anniversary of the assassination of one of the greatest figures in contemporary Iranian history, Dr. Noor Ali Tabandeh, also known by his spiritual title of Majzoob Ali Shah. Dr. Tabandeh was a prominent Jurist, an expert in Islam, a freedom fighter, a mystic and the spiritual leader of eight million Gonabadi Sufis in Iran and around the world. He is widely remembered as the Father of Human Rights in Iran, as for Dr. Tabandeh, human rights was always at the centre of his beliefs!

Dr. Noor Ali Tabandeh had an active role in society both before, and after the 1979 Revolution, and throughout his life, he was always the voice of the voiceless, and firmly stood by his principles. He represented and defended the rights of individuals that no lawyer would dare represent and defend! He firmly believed in every individual’s right of access to a lawyer, and was a strong advocate for gender equality and made considerable efforts towards the empowerment of women and girls.

In the early stages following the 1979 revolution in Iran, Dr. Tabandeh served in the temporary Government of Bazargan, first as the Deputy Minister of Justice, and then as the first vice Minister of Justice, during which time he worked tirelessly to preserve the integrity and the independence of the Judiciary, to prevent the government from becoming corrupt.

Dr. Noor Ali Tabandeh was highly regarded and respected among all political and social groups, regardless of their beliefs and political worldviews, and was in fact a point of unity between all opposition groups and he was seen as a source of inspiration.

As a founding member of the Iranian Committee for the Defence of Human Rights, he represented honorary lawyers in the courts.

During the Iran-Iraq war in the mid-1980s, Dr. Noor Ali Tabandeh and several of his like-minded companions sent a letter to the then Supreme Leader of the Islamic Republic of Iran, Ayatollah Khomeini about the consequences of continuing the war in Iraq, and warned him about the plight of Iranian society.

Following this, Khomeini actually put a halt on the Iran-Iraq war, and acted appropriately based on the letter sent to him as a warning.

In his capacity as the leader of the Gonabadi Sufi Order, Dr. Noor Ali Tabandeh founded the Reza Aid Institute, established to provide services and facilities of all kinds for those with low income, and the elderly who were no longer able to look after themselves, and did not have anybody to look after them. It is important to note that these services were made available for all citizens, and not at all limited to any groups. The kinds of social services and support that were provided were endless, including, but not limited to social welfare, medical support, hospital treatments, legal advice and legal representations, monthly financial support, as well as care homes for the elderly.

As the leader of the Nematollahi Gonabadi Sufi order, Dr. Tabandeh faced further sabotage and harassment. As in the following years, dozens of houses of worship which belonged to the Sufis were attacked and some of them were set on fire. Dozens of Sufis were killed, hundreds were wounded, and thousands were imprisoned.

Despite pressures imposed by the ruling regime, Dr. Noor Ali Tabandeh taught his followers the same principles that he lived by throughout his life. And this is why Iran’s ruling regime saw him as a threat, as he was educating millions to stand up for what is just, and to not remain silent in the face of oppression.

Dr. Noor Ali Tabandeh taught his followers that “In friendship, we are gentle like a running stream of water, but in defence against oppression, we are resilient like a rock”.

Despite this peaceful approach, pressures on Sufis in Iran was increasing day by day. Also, as a result of Dr. Tabandeh’s leadership, many people were becoming Sufis, as some estimate the number of Sufis in Iran to be as high as ten percent of the total population of Iran.

While government officials were preparing the public for war, and belligerent propaganda were being broadcasted on all state television, radio and newspapers, Dr. Noor Ali Tabandeh used the influence of his words for peaceful purposes and sent a message to his followers urging them not to take part in the war.

This caused waves of anti-war sentiment within society and influenced the authorities to reconsider their decision to start a dangerous war.

Firstly, the security forces surrounded his home, and then, with the help of a group of four relatives and infiltrators, took control over his home, and placed him under a house arrest, which lasted two years, until the end of his life.

They arrested his trusted physician, and then began the slow process of gradually poisoning him after appointing a treacherous medical team.

During Dr. Noor Ali Tabandeh’s 2-year house arrest, he was barred from speaking, and nobody was allowed to visit him. All affairs related to him were carried out by four government agents who were Sufis in name only and used their position to forge fake statements in Dr. Tabandeh’s name in order to spread false news and misinformation.

Finally, on the 24th December 2019, as a result of the conspiracies of the group of four members, and the medical team, this great human rights defender fell victim to one of the greatest human rights violations committed by the Iranian regime.

After his cowardly murder, a group of his followers decided to launch a campaign, Justice for Dr. Tabandeh, along with the Fact-Finding Committee, to clarify the truth, and to call upon the world to pay attention to the murder of Dr. Noor Ali Tabandeh, and not to ignore this crime easily.

Dr. Noor Ali Tabandeh’s spirit of standing up for what is just, and defending the truth, lives on among his eight-million followers who he nurtured for 23 years of being their spiritual leader.