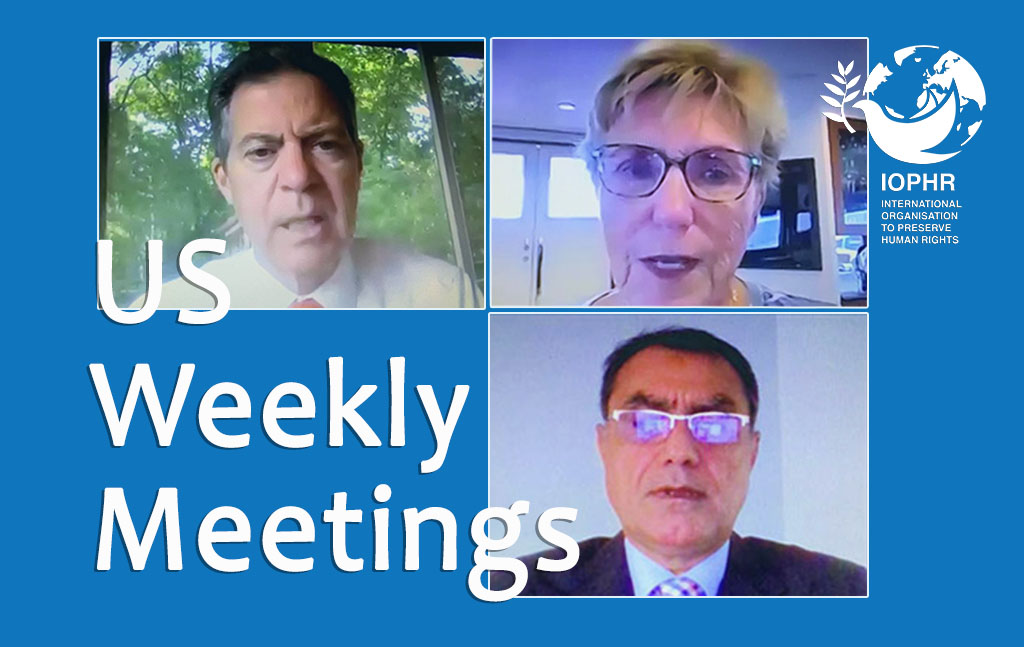 On the weekly webinar with Ambassador at large Sam Brownback, and US Commission on International Religious Freedom chair, Gayle Manchin, spoke with IOPHR representative, Hamid Gharagozloo, about the gross Human Rights violations of the Iranian regime.

Few days ago, the whole world witnessed the execution, or more aptly put,  murder of yet another Iranian dissident Mr. Ruhollah Zam, the abducted journalist who had dedicated his life to the cause of freedom for the oppressed nation of Iran. While the regime was preparing to murder Mr. Zam, Javad Zarif, Khamenei’s foreign minister had convened with his E.U. counterparts, working on an extensive economic cooperation plan – code word for the fire sale of Iran’s natural resources in return for political concessions – proving yet again the Europeans’ betrayal of Iranian people. This hypocrisy has to end and E.U. should be held accountable.

The oppression of Gonabadi Sufis continues as usual. Mr. Behnam Mahjoubi, the Gonabadi Sufi prisoner, is furloughed between the mental asylum where psychosis inducing drugs are administered to him, and Qarchak prison. There are seven other Gonabadi Sufis in prison for over 1,030 days with no end in sight.

Few days ago, Ms. Shirin Khakpoor, a dissident fighting the barbaric, draconian and misogynistic policies of the regime levied against Iranian women, was sentenced to 18 years of prison in a ruling by the appeals court.

Murders, arrests, imprisonments and oppression of the over twenty million Iranian Sunnis continue as usual.

So is the oppression of Baha’is who have been stripped off every civil right since the inception of this regime.

So is the oppression of Christians and those who have converted to Christianity.

The occupying regime in Iran has the worst Human Rights violations record in the world, ranging from the highest rate of executions second only to China in absolute numbers, to organ harvesting of death row inmates, to violent oppression of all religious minorities. And for as long as E.U. continues its double standard of pretending to value Human Rights, and at the same time conduct lucrative economic dealings with the occupying regime in Iran, there will be no hope for the people of Iran.

I ask of every organization and individual in this gathering to join me in taking a firm stance against the occupying regime in Iran and hold their cooperating and enabling counterparts in Europe responsible.