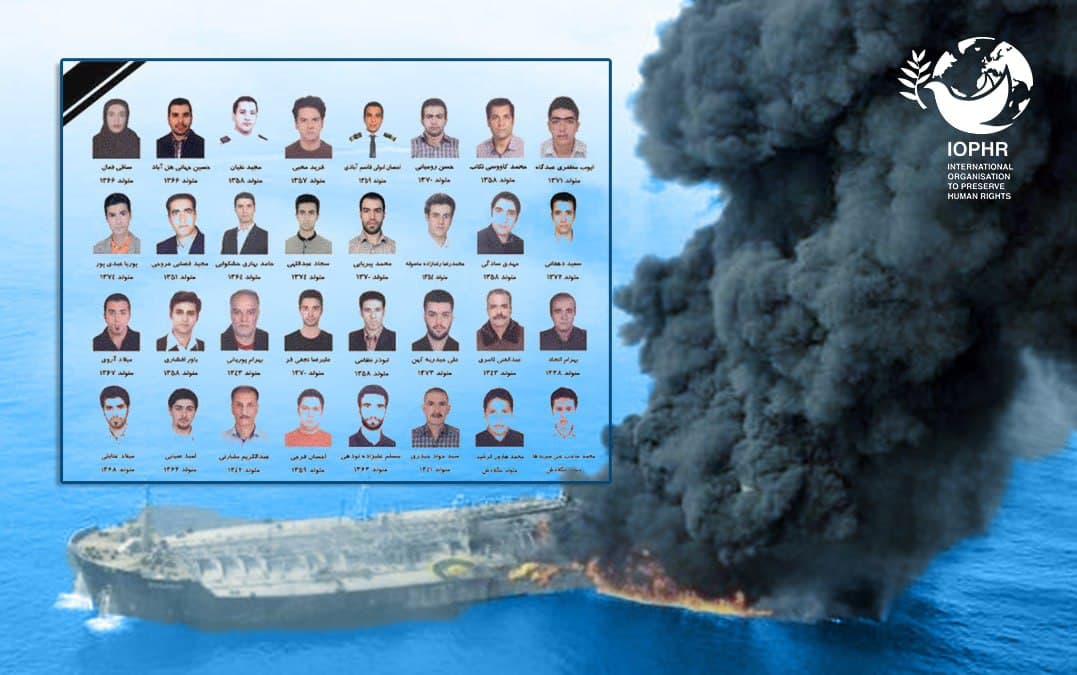 Three years ago, on 6th January 2018, under a very suspicious circumstances an accident involving the Iranian ship Sanchi, occurred within Chinese waters, where 30 members of crew of Sanchi were killed or disappeared, 28 of whom were Iranian citizens.

After three years, the exact circumstances surrounding the incident are still unknown, and neither the Iranian nor the Chinese government’s officials have shed any clarity in this regard. Therefore, both governments are either neglecting or failing in their duties to the families of the victims and the international community over his time.

Regarding this painful incident, the IOPHR would like the draw the attention of all relevant international authorities to the following series of ambiguous points and questions in regards to this tragedy:

1- What exactly happened to the other ship in this collision namely, the Chinese ship CF Crystal? Did this ship have any casualties? Why no video report or photo of this ship, which collided with Sanchi have been published?

2- How does exactly a ship that was moving at a speed of 15 knots and collided with another ship with similar speed, cause a depression of 5.5 meters deep in the hull of the Sanchi ship, where even the high water reservoir of the ship has been torn between the collision site and the fuel tank?

3- How was the CF Crystal ship able to pass the blast wave, as result of such a collision and leave the scene without any damage or casualties? Or did the damage Sanchi suffered, as some available documents suggest, was due to another reason? This is something to consider given the great ambiguity surrounding the Chinese ship’s timetable!

4 The Chinese government has yet to explain why the CF Crystal, which was supposed to cross the route four days later, was near the Sanchi location on that day and at that moment, which led to the supposed collision?

5. The Iranian government must also answer why it asked a German company to install a digital meter on the deck of the Sanchi ship. If the cargo of this ship was gas condensate products and nothing else, why was such a meter installed on it?

6. The Iranian government must further answer why the Sanchi ship was moving with its GPS turned off? Was the ship’s cargo illegal, is that why its GPS was turned off?

7. The governments of Iran and China must also explain why they only published 19 seconds out of the 24 seconds contents of the Sanchi black box recording? What do the contents of the additional 5 seconds reveal that there was such an urgent need to have it covered up?

8. So far, the families of the victims have received 21 calls from the Far East and the Pacific area, urging assistance for the Iranian sailors. Is it possible that Iranian sailors are still alive and captive somewhere? What has the Iranian government exactly done so far in regard to answering the victim’s family’s questions, and investigating the cause of the collision?

It should be noted that so far two bodies have been delivered to the families of the victims, but no trace of the explosion has been seen on these two bodies.

The lack of answers to the above questions and the unavoidable contradictions of the official narratives of this incident confirm the theory that the security officials are hiding the facts behind this painful incident. All of which is not helping to reconcile the souls of the family of the victims of this incident and instead point to secret plans of the Iranian government in regard to Sanchi’s true cargo and its mission.

The IOPHR, while drawing the attention of all international authorities to these matters, notes that the covert actions of the governments of Iran and China in connection with this unfortunate incident are a clear violation of fundamental human rights of the victims and their families which require special attention by the international community to be fully addressed.

In this regard, the IOPHR, while expressing its sympathy and its condolences to the families of the victims of this suspicious accident, declares that until all the hidden opaque dimensions of this accident are clarified, it will continue its efforts to attract the attention of all relevant international authorities to this incident.