IOPHR’s statement in connection with the cowardly murder by the Islamic Republic of Iran of Mr. Behnam Mahjoubi whilst in prison 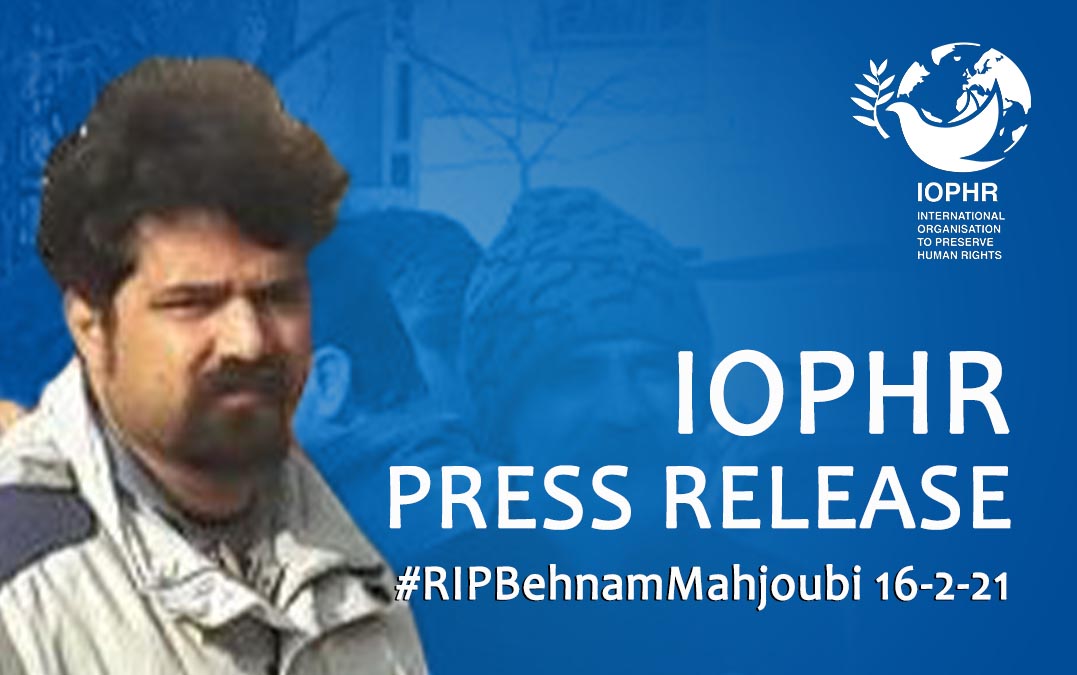 According to reports received in regards to Mr. Behnam Mahjoubi, a prisoner of conscience in an Iranian prison, after a period of several months of untold suffering and torture, in accordance with the official confession of certain judiciary officials, Mr. Mahjoubi was poisoned through prescribing of high doses of unknown drugs, whilst incarcerated in an Iranian prison. As a result of which, Mr. Mahjoubi has lost all vital signs.

This is not the first time that a prisoner has been killed in the Iranian prison system in this way! What is also certain is that in the absence of a proper response from the international community it will certainly not be the last!

Mr. Behnam Mahjoubi, a Gonabadi Sufi, also recently had gone on a hunger strike to protest the lack of health care facilities, and the lack of medical care in his prison; but the prison officials instead of addressing his demands, sent him to a psychiatric hospital. However, under public pressure, and pressure from human rights activists, he was once again returned to Evin Prison; where he was injected with unknown drugs without any explanation, which then aggravated his ailment, and left him in a coma.

The IOPHR would also like to note that, in accordance with the provisions of the International Covenant on Civil and Political Rights, Resolution 663 of the United Nations Economic and Social Committee, adopted on 13 May 1977, which Iran is a signatory, there are minimum standard requirements in prisons. Where in particular in one of the sections of Article 22, and a section of Article 35 of the same Convention, clearly state that prison authorities in the signatory countries must provide the necessary medical facilities to all prisoners, and offer prisoners with proper medical care. Therefore, given this, the Tehran government officials who failed in their duty of care towards Mr. Mahjoubi are responsible for his murder, and must be held accountable in international forums.

Furthermore, the actions of the officials of the judiciary in regards to the case of Mr. Mahjoubi clearly violated the domestic laws of Iran, in particular Articles 113, 114 and 116 of the executive regulations of the Prisons Organisation and the security and educational measures of the country, which were approved on December 11, 2005.

It is also worth mentioning that Mr. Behnam Mahjoubi had previously been provided by the medical examiner’s office, a certificate of prison ineligibility, thereby making his imprisonment illegal. However, unfortunately the prison authorities refused to release this Gonabadi Sufi, until he was finally murdered in a prison of the Islamic Republic of Iran by prison officials.

It also should be noted that Mr. Behnam Mahjoubi had previously given a shocking account of his torture in a psychiatric hospital in an audio file released, after he was finally returned to Evin Prison.

Accordingly, the IOPHR would like to draw the world’s attention to the undeniable fact that the Islamic Republic of Iran’s treatment of prisoners is a clear example of a crime against humanity, and the officials responsible must be tried in an international tribunal.

In this regard, the IOPHR calls on all democratic governments, especially members of the European Union, to reduce all economic, political and diplomatic relations with the ruling regime of Iran to the bare minimum. In order to show solidarity with those Iranians who are suffering at the hands of the brutal Iranian regime, and put pressure on the Iranian regime to stop its policy of systematic oppression of minorities, or anyone who opposes the extremist agenda of the Iranian regime.