IOPHR Statement on the EU’s Discriminatory Approach Towards Human Rights 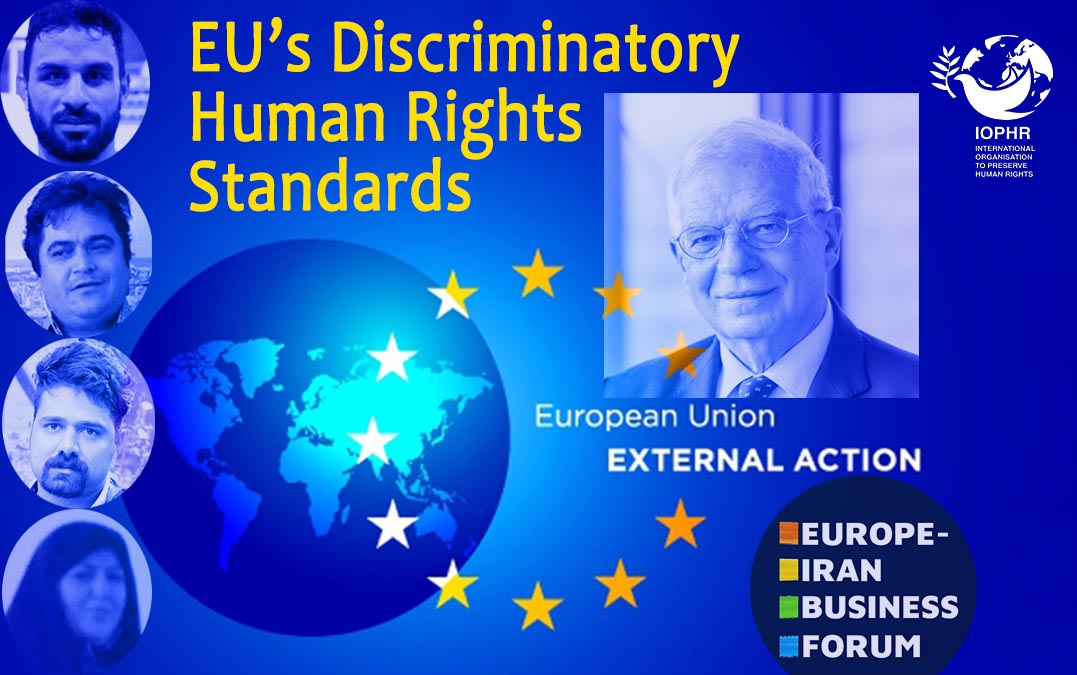 In disbelief, on Monday 1st March, the EU held a joint trade meeting with the Iranian anti-human rights system under the title of Europe-Iran Business Forum, in which unfortunately, the Deputy Director of the European External Action Service, Mr. Enrique Mora Benavente, opened the meeting as the first speaker.

The meeting, originally scheduled to be held in December of 2020, was postponed in protest against the kidnapping and subsequent extrajudicial execution of the Iranian journalist from Paris, Mr. Ruhollah Zam, which sparked an international outcry.

The question is, what has changed in Iran since Mr. Zam’s execution that has convinced the foreign policy officials of the European Union to ultimately proceed with the meeting and hold the Europe-Iran Business Forum?

In 2020, Iran had the second highest number of executions in the world after China with 250 executions, and the highest per capita execution rate in the world.

More disturbingly, in 2021, and just during the past two months, more than 50 people have been executed in Iran, which to date, is the highest execution rate in the world.

In one shocking case, an innocent woman by the name of Ms. Zahra Esmaeili who suffered a cardiac arrest and died in a state of shock, after seeing the execution of 16 other men who had been executed before her eyes, had her lifeless body executed and left hanging for several minutes.

In addition to the high rate of death sentences in Iran, regrettably, extrajudicial executions and arbitrary killing of prisoners of conscience in Iranian prisons continue to be carried out with vigour.

In the most recent case, the lifeless body of a prisoner of conscience named Mr. Behnam Mahjoubi, who was killed by poisoning through overdose at Evin Prison Medical Centre in Tehran, was transferred to an out-of-prison hospital, only for his family to be told a week later that Mr. Mahjoubi was dead.

Today, the European Union re-imposed new sanctions on Russia for poisoning Mr. Alexei Navalny, who is fortunately still alive, while Iran’s ruling regime poisoned and killed Mr. Behnam Mahjoubi at the Evin Prison Medical Center. Contrary to Mr. Navalny’s case, the death of this Iranian prisoner of conscience did not spark the slightest of reactions.

This is despite an official medical report that deemed Mr. Behnam Mahjoubi unfit to remain in prison.

As with the recent case of Mr. Behnam Mahjoubi, a year ago, the Iranian regime poisoned and ultimately killed Dr. Noor Ali Tabandeh, a politician and spiritual leader of more than eight million Gonabadi dervishes, after two years of being placed under house arrest.

In addition, hundreds of extrajudicial killings of prisoners of conscience in Iranian prisons, whose names have been announced to the international community, have thus far been met with silence and appeasement by the European Union. Unfortunately, this silence and appeasement has made the Iranian regime more determined to expand its anti-human rights activities.

Unfortunately, none of these blatant human rights abuses convinced EU officials to reconsider their extensive relationship with the Iranian regime. While the crackdown on protests in Belarus has prompted the European Union to impose human rights sanctions on the ruling regime, no sanctions have been imposed due to the numerous killings in Iran. Especially, after the murder of over 1,500 people, including more than 100 children and adolescents in November 2019, no humanitarian action was taken against the Iranian regime.

Isn’t that a surprise?

Even now, the Iranian regime has been cutting off internet access to Balouchistan Province in the South Eastern part of Iran for more than a week, and in this silence of news and information, the regime is killing the deprived people of that region. According to the reports received so far, more than 30 people have been killed.

Unfortunately, this tolerance and negligence has also endangered the security of European citizens.

Are Europeans aware that an arrest warrant has been issued against Iranian leaders by a European court?

On 10 April 1997, at a ruling regarding the Mykonos restaurant assassinations, the German court issued an international arrest warrant against the Iranian intelligence minister after declaring that the assassination had been ordered by him with knowledge of the first leader Ali Khamenei. In fact, Iran is the only country in the world where a large number of officials of the ruling regime are wanted by Interpol.

In November 2007, Interpol on behalf of the government of Argentine, published the names of six Iranian officials charged with their role in the terrorist attack. Their names were placed in the Interpol Red Notice list.

In all these operations, the embassies of the Islamic Republic of Iran have played a key role in providing and transferring money for the plot and explosives needed to carry out the operations.

On 9th July 2018, the International Organisation to Preserve Human Rights (IOPHR) sent an Email to the European Union External Action Services and warned against the Iranian regime’s plans to carry out acts of sabotage and terrorism on European soil, and proposed restrictions to be applied on the diplomatic immunity of the regime’s diplomatic missions in Europe. Unfortunately, these warnings were not taken seriously, and a few months later, in September of the same year, an Iranian couple were arrested in Belgium with 800 grams of explosives. It was further revealed that the money and explosives were received via an Iranian diplomat. According to various records, the Quds Force, under the guise of the employees of the embassies of the Islamic Republic of Iran, have used diplomatic immunity to smuggle weapons and explosives into various European countries, endangering the security of European citizens.

Thus, it can be seen that almost all the officials of the ruling regime in Iran are in fact a group of bandits and lawbreakers, who use all the capacities and facilities provided in the international system for the development of cooperation and progress between nations, to commit illegal acts.

The deliberate downing of Flight 752 of Ukrainian Airlines, by firing two surface-to-air missiles and killing 176 innocent people on board, is just one of thousands of crimes internationally committed by the ruling regime in Iran.

The hostage-taking of thousands of foreign nationals and dual nationals to extort money from European governments, is another act by the criminal gang ruling over Iran.

It is possible that some of the organisers of the Europe-Iran Business Forum, who have been on record defending the rights of women and children on their pages, are not aware that in Iran, sexual intercourse with underage children is completely legal and has the full support of the ruling government.

Do the conference organisers know that many women in Iran have been sentenced to decades in prison only for not covering their hair?

How will the Europeans deal with Iran whilst fully aware that the Iranian regime is officially a money laundering regime?

Does the European Union know that Iran’s name is on the black list of the Financial Action Task Force (FATF) for money laundering, because the Iranian regime refuses to sign and adhere to the related protocols?

Iran’s economy, which has been completely taken over by paramilitary forces, especially the Islamic Revolutionary Guard Corps (IRGC), is heavily influenced by money laundering, and the Iranian government refuses to sign a transparency agreement. This is to allow smuggling and money laundering revenues be injected into its proxy groups in the Middle East and its terrorist “sleeper agents” around the world, especially in Europe.

Thus, any trade with the Iranian regime is a trade with the militant and terrorist groups ruling over Iran, which leads to an increase in terrorism and inhumane operations inside and outside of Iran.

In view of the above facts, the International Organisation to Preserve Human Rights condemns the holding of the joint economic meetings with the Iranian regime, and notes that holding such meetings encourages Iran’s ruling regime, which only leads them to take further anti-human rights measures and ultimately increase the suffering of the Iranian and European citizens.

The International Organisation to Preserve Human Rights, once again draws the attention of the world to the undeniable fact that the only way to counter the abuses of the ruling regime in Iran is for the issue of “human rights” to be given a central place in all future diplomatic relations with Iran, and to pay close attention to the issue of advancement of human rights standards in Iran. So that the Iranian regime will be compelled to comply with all international conventions in this regard, which in turn will no doubt be beneficial for the security issues  around the world, especially within EU member states.