The Urgent Request from 83 political prisoners and group of Iranian civil, political and human rights activists to the President and Members of the UN Human Rights Council to immediately address the dire situation of political and ideological prisoners in the prisons of the Islamic Republic of Iran 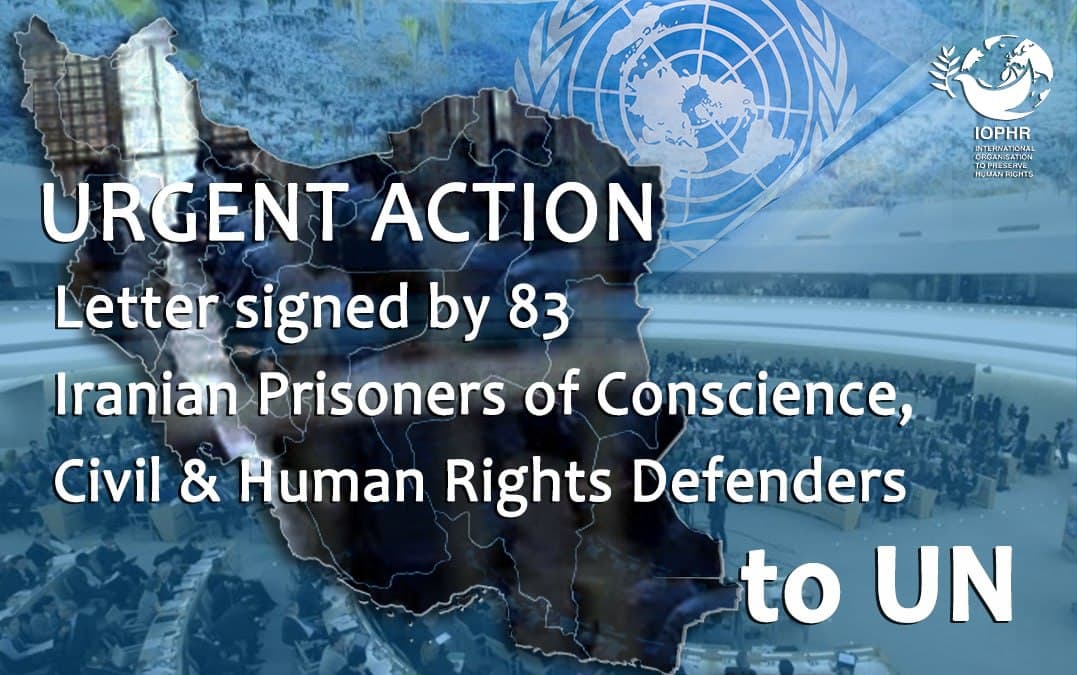 Your Excellency the Chairman and members of the United Nations Human Rights Council,

What should be abundantly clear is that the Iranian Regime has systemically placed unbearable pressures on different groups of the Iranian people, such as: Women, ethnic, religious, and all minorities, the latest example of which is the killing of Baluch minorities in the Sunni region of Sistan and Baluchistan, as well as the continuous killing of Kurdish citizens who barely make a living. Sadly, it also seems that the human rights situation in Iran has worsened considerably since the massacre of 1500 or more innocent protestors during November 2019 protests. As the regime has now placed even more pressure on the activists and political prisoners. The way the Regime deals with these groups is much worse than the way it deals with other defendants, and consequently all human rights organisations should pay even more attention to the plight of political prisoners!

Political prisoners in Iran are facing arbitrary and offensive detentions, long-term house arrests, so-called arbitrary killings, illegal trials and illegal verdicts by the revolutionary courts without due process of law; and shameful ill-treatment of political and ideological prisoners convicted by the these illegal courts, all of which are very shocking!

The following is simply a small list of the harsh treatments faced by political prisoners in Iran:

1- According to Article 159 of the Constitution of the Islamic Republic, the judiciary is the official point of reference to file grievances and complaints, and the establishment of courts and their jurisdiction is subject to the rule of law. However, contrary to this principle, in practice illegal courts are established by the Supreme Leader, which are outside the provisions of Article 159, and constantly issue, and issue very heavy judicial sentences and executions!

2 – According to Article 168 of the Iranian Constitution: The prosecution of political defendants and those accused of crimes related to journalism, information or press, must be held in the courts of justice in public and in the presence of a jury. But in practice, political defendants and even the press are bared entry to these revolutionary courts, which are held behind closed doors, without the presence of a jury, and generally without the presence of even a trial lawyer! During which heavy sentences are issued against defendants, without any adherence to the principles of a fair trial!

3. Despite the recent passage of the Political Crime Law, and in violation of Article 168 of the Constitution and the Political Crime Act, political activists are considered to have committed national security crimes, and thus civil, political, press, and even environmental activists are excluded from public trials. Therefore, these defendants are deprived of justice and the presence of a jury.

4. Political convicts who are considered by the government as a security risk, in practice live in fear of their live. As they are either killed by law enforcement agencies during the investigation process, or like Zahra Kazemi, Sattar Beheshti, Ali Akbar Saeedi Sirjani and many others, such as: Hoda Saber, Mohsen Rouhalamini, Mohammad Kamran, Amir Javadifar, etc. are killed in prisons by various other means.

5. In many cases, political prisoners are held with the most dangerous prisoners such as murderers, serial killers, and armed robbers, and as a result often end up being killed by these dangerous prisoners, such as in the case of Mr. Alireza Shirmohammadi and many others like him.

6- Political prisoners and prisoners of conscience also lack proper health care, and are held in confined spaces, and thus face many other problems in the Iranian prison system that places their very lives in danger.

7- Political prisoners’ rights are also ignored in terms of medical examinations by trusted doctors of the prison, and even medical examiners’ verdicts are also ignored by the regime! As shown by the case of Behnam Mahjoubi who was medically ruled to be ineligible for prison, and was issued a certificate of ineligibility by the Iranian medical examiner’s office. Yet, despite this he was kept in intolerable conditions, and was subsequently murdered through poisoning. Then, there is the case of a well-known figure such as Mohammad Nourizad, who despite receiving several medical certificates of ineligibility for imprisonment, has been kept in the worst possible conditions in prison, and for months he was not even allowed to call his family! While his son (Ali) has also been sentenced to 3.5 years in prison for simply sympathising with those killed in the Ukrainian plane downing, and is being held in the worst possible conditions.

9. Torture and beatings of political prisoners, has sadly also become commonplace in the Iranian prison system.

10 – Keeping of political prisoners in solitary confinement for continuous and prolonged periods.

12. Kidnapping and killing of political activists inside and outside the country, such as the case of Ruhollah Hazm, who was executed after his abduction.

Therefore, in view of the above points, we, the signatories of this statement, request your Excellency and the human rights circles, especially the UN Human Rights Council, to convene an extraordinary and urgent meeting to address these issues. In order to take immediate and effective decisions beyond the normal condemnations we have seen recently, and find a way to force the Iranian Regime to comply with all international human rights conventions.

We the signatories of this letter appreciate your immediate attention to this urgent matter.

7. Osanloo’s the mother of the prisoner Afshin Osanloo

27. Raheleh Rahempour, the family of those executed in the 1980s

28. Amir Razaghi, from the National Liberation of Iran

31. Hashem Zeinali, the father of “Saeed Zeinali” who was kidnapped by the Iranian regime since 1997 and has been missing since, without any information.

45. Gohar Eshghi, The mother of Sattar Beheshti’s -who was martyred under the torture by the regime

52. Mohammad Ghaemi, from the National Liberation of Iran

55. Amin Kurd, from the National Liberation of Iran

67. Fatemeh Maleki, the wife of Mohammad Nourizad and mother of Ali Nourizad, both of whom are current political prisoners

76. Akram Niqabi, the mother of “Saeed Zinali” who was kidnapped by the regime since 1998 and is missing without further information about her!