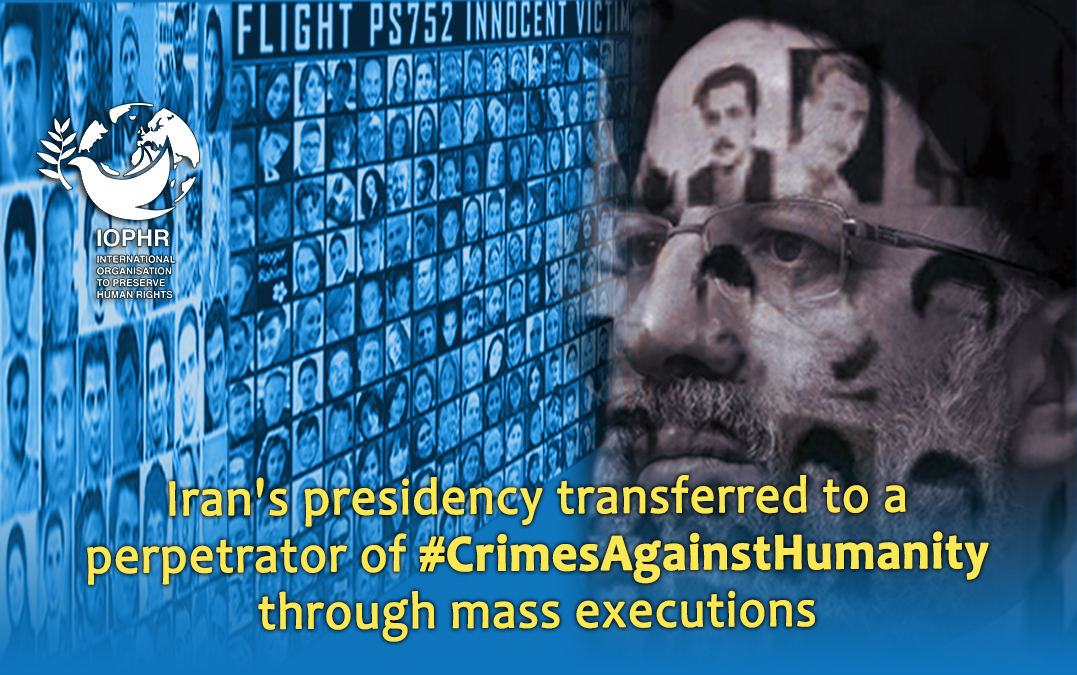 Ali Khamenei, the self-proclaimed leader and religious dictator of Iran, last week in a scandalous show, through a sham of an election handed over the presidency of Iran to Ebrahim Raeisi, a man who has committed crimes against humanity.

Ebrahim Raeisi, known as the perpetrator of a crime against humanity, is accused of participating in the execution of nearly 50,000 innocent Iranian citizens, many of whom were in their youth or adolescence years, when they were executed by Raeisi. The appointment of an inhumane criminal as the Iranian President by Ali Khamenei is clearly aimed at creating a boneyard in Iranian society for the transfer of dictatorship.

Ebrahim Raisi, the well-known executioner of the Iranian people, was appointed to the presidency by the religious dictator of Iran, while according to the published statistics and the testimony of eyewitnesses, as well as the published videos and photos, the polling stations were almost completely empty of voters. As according to verifiable reports less than 8% of Iranian citizens participated in the presidential elections. An election in which almost all candidates who did not approve the dictatorship of Ali Khamenei were eliminated, leaving only the candidates who supported Ali Khamenei, the religious dictator of Iran. Thus, the votes for Ebrahim Raisi, represented less than 3% of the votes of the Iranian people.

On the other hand, by staying away from the polls of the June 18, 2021 election, the Iranian people gave a firm “no” to the religious dictatorship and the rule of oppression and terror through a joint and coordinated boycott of the election. Thereby completely delegitimizing the inhuman ruling regime of Iran.  Furthermore, the false reports, fake videos and photos published in the state media were the best evidence of the non-participation of the majority of Iranians in the recent election show.

The lying and superstitious ruling regime of Iran, which was surprised by the unity of non-participation of Iranian citizens in the nationwide elections, in response, resorted to trickery by illegally extending the voting deadline to 2 am the next day, in addition to violating the election laws by other means. All in order to provide the necessary time for electoral manipulations of the results by its agents.

It should also be noted that according to Note 2 of Article 20 of the Presidential Election Law, voting must take place on Friday, and therefore the votes cast on Saturday, June 19 are invalid and illegal. Moreover, the fact that the counting of votes had more or less ended by the last hours of Friday, goes to show that only 8% of eligible people across the country had actually participated in the election. Which further shows the determination of the Iranian people to change their system of government.

Accordingly, the IOPHR announces to the world that Iranian citizens, through a nationwide boycott of government elections, have separated themselves from the religious dictatorship that rules Iran, and want no further responsibility for the mischief, hate and terror that the regime’s forces wage within and outside of Iran.

The IOPHR also calls on all free and democratic governments in the world, especially the members of the European Union, to take action in light of the recent election results that prove the illegitimacy of the dictatorship in Iran, by ceasing all economic interaction with Iran, including the reduction of their diplomatic relations to the lowest possible level. As such an action, will no doubt show the Iranian people that EU has respected their brave act of defiance against the Iranian regime, and supports their attempts to free themselves from the dictatorship that is currently ruling Iran.

Obviously, given the numerous historical records of the undeniable cases of abuse of international diplomatic immunity by the ruling regime of Iran in order to plan and carry out terrorist operations and kill innocent people around the world, a reduction in the level of interaction with the Iranian regime, and especially reducing the level of diplomatic relations, will no doubt also improve the security of citizens of different societies.

In conclusion, the IOPHR warns that any agreement with the dictatorship in Iran that does not guarantee the Iranian regime’s compliance with international human rights standards, will not only be seen as an act of disrespect of the Iranian people’s brave decision to boycott the recent elections, but will also lack any legal validity. Especially, as the results of the recent election have shown that the current Iranian regime has no legitimacy nor approval of its citizens.