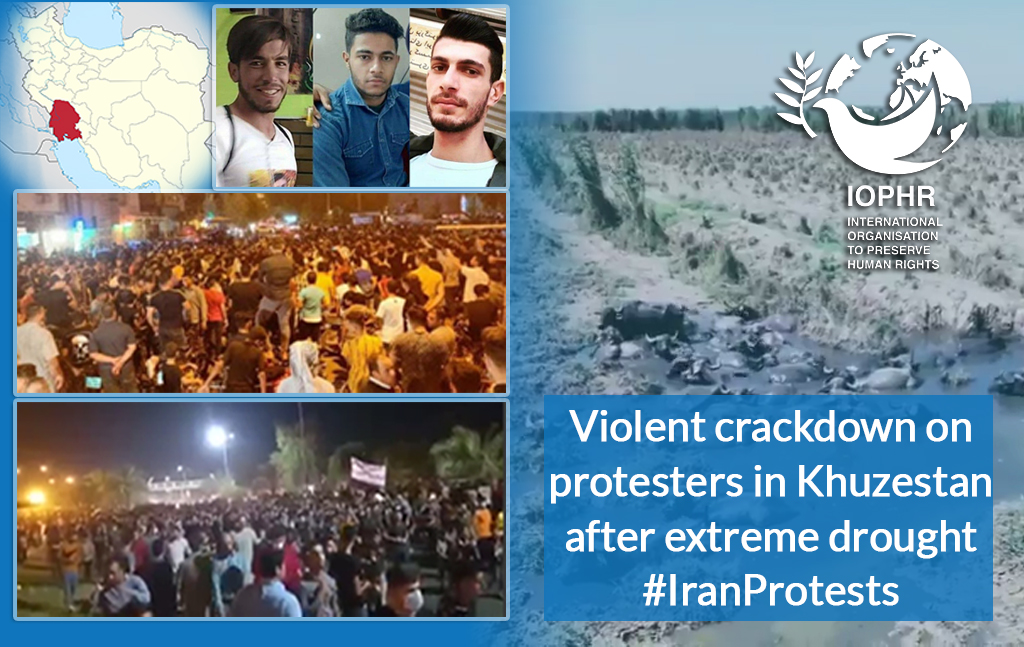 The heroic people of Iran, who in an admirable, united way through their boycott of the June 2021 presidential election, rejected the legitimacy of the Islamic Republic of Iran, have recently been concerned by their Khuzestani compatriot’s protests in regards to the lack of drinking water and electricity.

The Khuzestan province, has the richest oil and gas resources in the world, and is the richest province in Iran with significant share in Iran’s income. Khuzestan is also the most water-rich province of Iran, with five great rivers that originate in the Zagros Mountains and irrigate the lands of the Khuzestan Plain and flow directly or indirectly into the Persian Gulf.

For example, the Karun, which is the largest and longest of these rivers, is also the only navigable river in Iran, originates from Zardkooh in Chaharmahal and Bakhtiari province and flows nearly a thousand kilometres to reach the Persian Gulf.

However, unfortunately, the inept and corrupt officials of the Islamic Republic, especially in the engineering units of the Islamic Revolutionary Guard Corps, by implementing incompetent policies, including the construction of dozens of huge dams on the rivers of Khuzestan province, especially Karun and Karkheh, have not only wasted tens of billions of dollars, but have dried out thousand-kilometres of rivers, which had been flowing freely for tens of thousands of years.

It should be noted that the first human civilizations, including the Ilam civilization, were created along the Karun River five to seven thousand years ago, and from then until the establishment of the inhumane regime of the Islamic Republic, it has always been the main source of drinking water, agriculture, shipping, and other industries for the people of this land.

Unfortunately, as a result of the implementation of the corrupt policies of the Islamic Republic, now the honourable people of Khuzestan must endure dehydration in the heat of fifty degrees centigrade, along with lack of electricity. Sadly, the only response of the Islamic Republic officials to a completely legal, peaceful and justified gathering of honourable people of Khuzestan in order to protest the lack of drinking water has been oppression, and brutal clampdown, which has included shooting and killing of peaceful protestors.

The people of Khuzestan have no water due to drought, as mentioned, due to inept and corrupt policies of the Iranian regime towards this water-rich province of Iran.

In this regard, the IOPHR draws the attention of all citizens of Iran to the important point that the inhuman and corrupt policies of the Islamic Republic are not limited to Khuzestan province, but the scope of these policies covers all provinces of Iran. As other natural water supplies in Iran like the Zayandeh River in Isfahan, Lake Urmia, Anzali Wetland, and other similar natural water supplies have suffered bioclimatic changes and complete destruction.

Accordingly, the IOPHR calls on every Iranian citizen to immediately, actively and unwaveringly support their Khuzestani compatriots. The IOPHR also notes that according to Article 25 of the Universal Declaration of Human Rights, the people of Khuzestan must have the right to access safe drinking water, and depriving them of this right is a violation of fundamental human rights.

In this regard, the IOPHR draws the attention of all international bodies, including the International Union for the Protection of the Environment, to the environmental catastrophe that is taking place in Iran, and warns of consequences of allowing the continuation of dishonourable environmental policies of the superstitious theocracy that is ruling Iran. Which if are not stopped, will lead to a humanitarian crisis in many provinces of Iran, especially Khuzestan province.

The IOPHR  also draws the attention of all relevant authorities, including the United Nations, the European Union, international organisations, and all responsible states in the international system, to the catastrophic situation within Iran’s borders and warns of global crisis if these Islamic Republic of Iran’s policies are allowed to continue. As these policies will undoubtedly lead to a catastrophe of global proportions, by leading to mass migrations caused by lack of water and basic necessities of life.