IOPHR’s statement regarding the failed kidnapping of Ms. Alinejad by agents of the Islamic Republic of Iran 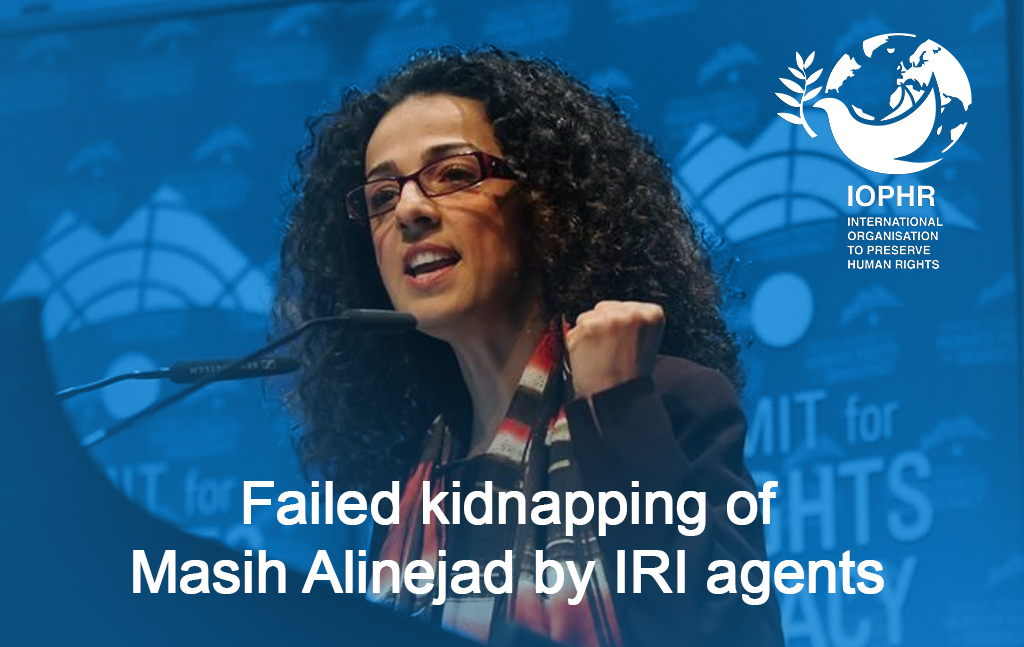 The regime of the Islamic Republic of Iran, from the very first days of its establishment, has consistently attempted to eliminate its opponents inside and outside the country, by measures such as assassinations, kidnappings and executions. According to some statistics, at least more than three hundred cultural, political and human rights activists, who have opposed the Iranian regime have been murdered outside of Iran’s borders by the Regime.

For some time now, the Iranian Regime has changed its elimination strategy to kidnapping of political opponents, cultural and human rights activists from various countries, especially in neighbouring countries that fall within the sphere of influence of the Iranian regime. Where the opponents of the regime are then transferred to Iran’s borders, and then tortured, in order to force a confession out of them. These victims are then subsequently exhibited in fake and theatrical TV interviews, in order to humiliate and intimidate them. All these subvert activities of the Iranian regime present great challenges to the security of open democratic western societies.

The abduction of political activists such as Mr. Foroud Fooladvand and his two accomplices, as well as Habib Assyoud from Turkey, and Mr. Jashmid Sharmahd, a resident of Germany on a trip to the United Arab Emirates, and Mr. Ruhollah Zam, a resident of France on a trip to Iraq, are all concrete examples of the clandestine policy of the Islamic Republic of Iran in regards to its opponents.

Meanwhile, the enmity of the Islamic Republic of Iran towards journalists, who are in fact human rights activists, and dissidents has been intensified of late, and a clear example of this intensification is the speedy execution of Mr. Ruhollah Zam, after his transfer to Iran despite international condemnations of Mr Zam’s kidnapping and sham trial. The international attempt by agents of the ruling regime of Iran to abduct Mr. Ali Javanmardi, a resident of the United States during a trip to Iraq that fortunately failed, is further evidence of the determination of the leaders of the Iranian regime to eliminate all voices of opposition.

Iran, under the rule of the Islamic Republic, has long been recognized as one of the most dangerous countries in the world for journalists, and according to numerous published reports, it is on the blacklist of six or seven most treacherous countries in the world for journalists and reporters. According to these reports, the Iran ruling regime has the highest number of journalists killed in the world during the last half century, and a recent example of such dangers is the case of two young environmental journalists who were covering the illegal activities of the Revolutionary Guards who were then killed in a suspicious bus accident.

A detailed examination of some of these cases is needed in order to shed light on the clandestine activity of the Iranian regime. Especially, the murders of many journalists and reporters in different countries of the world. Such as the cases in Turkey, Malta, Mexico and many other countries. For example, the case of Mr. Jamal Hosseini, human rights activist, Massoud Molavi, journalist and director of the Telegram channel “Black Box” and Saeed Karimian, the director of the Jam news service, who was a resident of Turkey and according to local police investigation was killed by agents and diplomats sent by the Islamic Republic, as well as Mr. Ruhollah Zam, a resident of France, who according to an official statement by the Iranian regime, was tricked into traveling to Iraq, where he was then kidnapped by the IRGC and then taken to Iran and executed.  All this shows that these journalists were generally killed or abducted, because they simply were producing accurate and professional reports on the plight of the Iranian people.

On this basis, the IOPHR would like to draw the attention of all politicians, journalists and researchers to the undeniable fact that these assassination and kidnapping projects are all taking place as part of  the official announcement of the “second step of the so-called revolution” by the Iranian Supreme Leader, Ali Khamenei. The Iranian ruling regime does nothing by accident, and all these activities are a clear sign of the long-term plan of the Islamic Republic of Iran to organize a very dangerous integrated network of corrupt criminal mafia groups, such as human and drug trafficking gangs along with terrorist and proxy groups around the world. In order to earn money and garner influence within the governmental structures of free democratic societies so as to influence the process of decision making in those societies.

Other examples include the murder of some independent journalists, such as Daphne Caruana Galicia, a well-known journalist who was killed while investigating the widespread corruption of mafia gangs linked to the Islamic Republic, especially the Iranian bank Platos in Malta, and the case of Victor Manuel Baez Chino. Who was a Mexican journalist killed while investigating Mexican drug gangs linked to the Iranian regime. All these are a clear indication of the rapid formation of wide spread criminal network in all corners of the globe, which have deep links to the Iranian Regime.

Not surprisingly, with the news of the Islamic Republic expanding its cooperation with drug cartels in Mexico and Latin America, the number of journalists killed in those countries has experienced threefold jump over previous years.

Meanwhile, the accurate publication of shocking details of the attempt to abduct the prominent Iranian journalist, Ms. Alinejad, by agents recruited by the ruling regime of Iran, which was thwarted by the vigilance of the US Federal Police, clearly shows the determination of the Iranian regime. As the ruling regime in Iran is determined to fight and destroy all the humanistic and libertarian values ​​of open democratic societies.

In this regard, while condemning this failed conspiracy, the IOPHR draws the attention of all international organizations to the growing trend of the formation of a criminal network affiliated with the ruling regime in Iran around the world. To appease the process of formation of this cancerous development, will undoubtedly come at the cost of endangering the collective security of the citizens of the free world.

The IOPHR also notes that some members of this organization have recently been threatened with death by some elements affiliated with the intelligence agencies of the Islamic Republic of Iran due to their fact finding undertakings and human rights activities. In this regard, some influential factors responsible for these threats and assassination system of the Islamic Republic in Europe, Canada and the United States have been identified.

Furthermore, the IOPHR notes that according to official reports, some terrorist projects of the Islamic Republic, such as the assassination of Mr. Massoud Molavi in ​​Turkey or the recent bombing in France, by diplomats of The Ministry of Foreign Affairs of Iran, which was thwarted by the vigilance of European police, all point to the fact that the Islamic Republic is frantically exploiting diplomatic facilities and immunities, in order to design and carry out terrorist projects around the world.

Accordingly, the IOPHR once again calls on all governments that feel responsible for international security, to minimize the level of their diplomatic relations with the ruling regime in Iran, and at the same time to impose political and diplomatic sanctions, in addition to economic sanctions. In order to force the ruling regime in Iran to comply with international accepted protocols, values and principles of relations.

The IOPHR also notes that, given that dealing with criminals and mafia gangs involved in human and drug trafficking is a crime, any interaction or even negotiation with the Iranian regime officials that has links to mafia gangs should be avoided at all costs. Therefore, IOPHR calls on all legislatures around the world, especially the European Parliament, to pass laws to limit the interaction of government officials with the Iranian regime.

The IOPHR as in the past, notes that widespread and universal support for human rights in Iran is the only solution to the problem posed by the Islamic Republic of Iran, and therefore urges all EU and all governments to put these issues at the centre of any negotiations and interaction with the Iranian ruling regime.