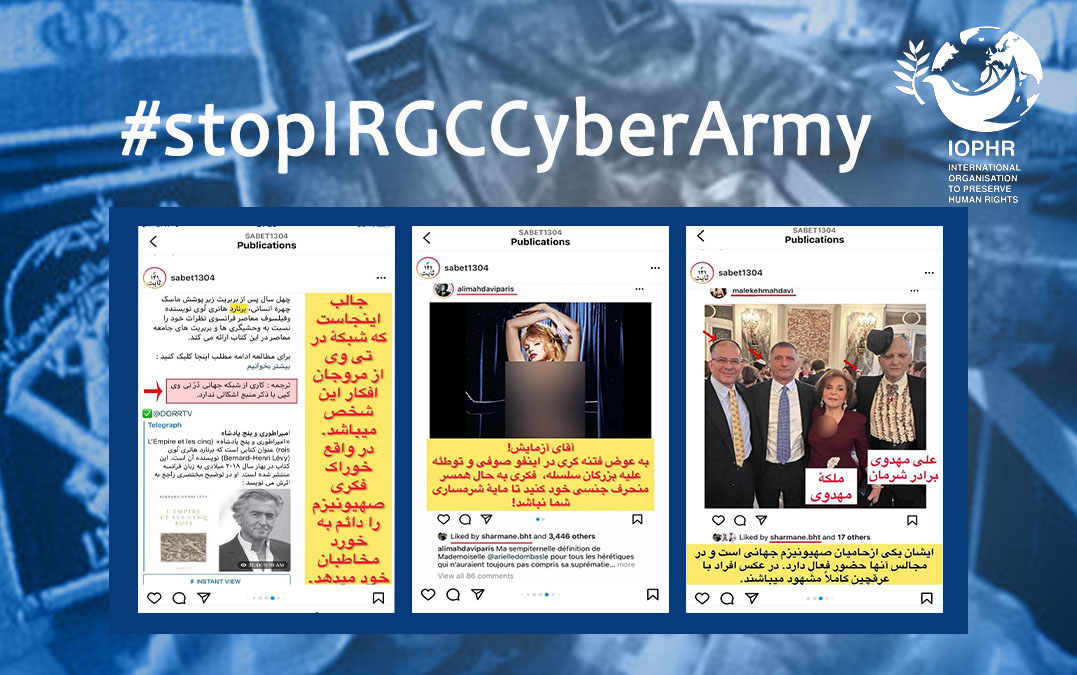 Following the assassination of Dr. Noor Ali Tabandeh an Iranian Peace-loving politician and freedom fighter, and the spiritual Master of the “Ne’matollahi Gonabadi Sufi Order” in 2019, the Gonabdi Order has increasingly became part of the Iranian government as elements within IRGC have gained complete control over this Order, and have in effect made the Order a “government sponsored cult”.

As a result, members of IOPHR, in particular Mrs. Sharman Beheshti, who is a French citizen living in Paris, have made tireless and continuous efforts to combat falsehood and shed light on the deceptions that the Iranian security apparatus use to govern Sufism through the establishment of Gonabadi Sufi sect in Iran. As a consequence of which, for the second time in recent months, Mrs. Sharman Beheshti has been the target of relentless threats and waves of a destructive psychological war, the evidence of which point to these threats being conducted by IRGC’s cyber army and the agents of the Ministry of Intelligence and its “Department of Religions and Sects.”

These attacks show that cyber ​​battalions affiliated with the Revolutionary Guards, as well as the IRGC’s Department of Religions and Sects, systematically use the capacities of social media platforms to their advantage, especially Instagram, which is very popular among Iranians, in order to publish hateful posts against Mrs. Beheshti and her family.

Although the publishers of these dangerous and violent posts all use fake and anonymous accounts affiliated with IRGC’s cyber army, one can observe a number of people with genuine accounts who are most likely employees of the intelligence services behind this hate campaign, or are family members of those responsible for this these posts. The republishing of these posts by several fake and genuine accounts broadens this hate campaign and its hate-mongering message within cyberspace.

The contents of these Instagram posts, which are included in the attached documents, are as follows:

The perpetrators of these dangerous Instagram accounts aim to launch an immoral psychological war against Mrs. Sharman Beheshti, by the use of false propaganda, and fake claims that allege Mrs. Beheshti’s affiliation with an imaginary Zionist network. These posts even claim that Mr. Bernard Henri Levy, the famous French philosopher and writer, is also a part of this Zionist network, and is in fact one of its main actors and operators.

Of course, it is clear to those with any common sense that the ultimate goal of the security forces of the Islamic Republic of Iran in publishing such unsubstantiated and uncorroborated allegations, is to incite fanatics and naive people to take dangerous actions against Mrs. Sharman Beheshti.

It should be noted that according to numerous reports, including a report published in the New York Times on May 14, 2019, the cyber forces affiliated with the Revolutionary Guards have been spending large sums in order to create and launch a “sprawling disinformation assembly line” through which they produce and distribute false and misleading information, which is then used against the political opponents of the Iranian regime and human rights activists around the world.

Unfortunately, however, it seems that this operation and the dissemination of false information against Mrs. Beheshti has a wide range goals. As the perpetrators of this psychological warfare, who spread false and mischievous news, have also claimed that Mrs. Sharman Beheshti, who has a husband and a child, has tendencies towards homosexuality. The evidence used to make such a claim was Mrs. Beheshti’s social media activities, in particular her ‘liking’ her brother’s work on Instagram (Mr. Ali Mahdavi, who is one of the famous French photographers)! At the same time, this hate campaign has taken illegal and dangerous positions against the LGBT community by publishing and spreading unjustifiable hatred against the LGBT community.

Also in the aftermath of these attacks, the security agents of this destructive war, by resorting to sophistry and deception, and via the mixing of what they call “Zionism” with Judaism, have tried to deceive public opinion by publishing photos from Mrs. Malakeh Mahdavi’s (Mrs. Sharman Beheshti’s mother) family photo album. These pictures, which are from Mr. Mahdavi’s private party, include images of a number of French Jewish individuals who were present at the party, and are used as alleged evidence for Mrs. Beheshti’s family’s tendencies towards Zionism!

As part of this hate campaign against Mrs. Beheshti, the members of this campaign have also published art photos taken from Mr. Ali Mahdavi’s professional photography album, accompanied with the addition of insulting remarks aimed at defaming, and at the same time, inciting extremists to attack Mrs. Sharman Beheshti, all on the grounds that she has liked her brother’s work of art on social media. It is also noteworthy that shortly after the publication of these posts on Instagram, Mrs. Sharman Beheshti started to receive threatening phone calls on her mobile, in which someone explicitly and directly threatened to attack and assassinate Mrs. Beheshti in the most heinous way.

Accordingly, IOPHR, while drawing the attention of all relevant authorities and international organizations and human rights activists to the dangerous consequences of the hatred campaign against Mrs. Beheshti conducted by cyber agents affiliated with the Islamic Republic, calls on international human rights organizations to take a stand against these types of violent hate campaigns by condemning the perpetrators and blocking the continuation of these hateful activities by hate groups, who are in reality the enemies of humanity, art and human rights.

It is also worth mentioning that some members of the IOPHR (including Mrs. Sharman Beheshti) were recently threatened and rudely insulted in an audio file released by one of the security agents of the Islamic Republic, which was subsequently surrendered, as an evidence of this hate campaign to the relevant international human rights authorities.