IOPHR Statement regarding the condemnation of the execution of Mr. Heidar Ghorbani 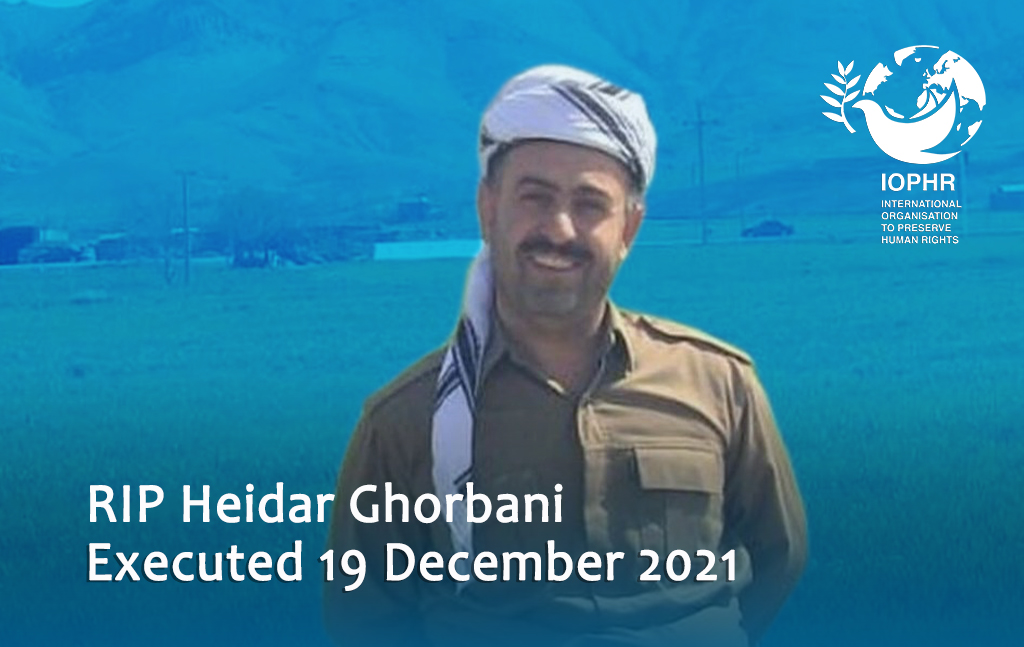 According to reports, Mr. Heidar Ghorbani, a Kurdish political prisoner awaiting trial, was executed on the morning of Sunday, December 19th 2021, without prior notice to himself nor to his family.

Undoubtedly, the illegal execution of Mr. Heidar Ghorbani, despite the order of the highest judicial official of the Islamic Republic to revoke his death sentence, is an undeniable sign of the complete lawlessness of the Iranian regime and lawless influence of the security agents affiliated with the Iranian Revolutionary Guards at the highest levels of the Islamic Republic.

Evidence also suggests that there was a deliberate attempt to prevent the retrial of Mr. Heidar Ghorbani at any cost, so that Mr. Heidar Ghorbani and his lawyer would not have the opportunity to expose the evidence of torture of Mr. Ghorbani by Revolutionary Guards security forces.

Surprisingly, the execution of this Kurdish political prisoner took place in such a hurry that even the legal requirements of Article 543 of the Code of Criminal Procedure regarding the pre-execution procedures, including the obligation of the executing judge to provide the last visiting rights for Mr. Heidar Ghorbani’s family were not observed.

Accordingly, the IOPHR strongly condemns the hasty and extrajudicial execution of Mr. Heidar Ghorbani, which took place, whilst he was waiting for his case to be retried.

The IOPHR also notes that the death penalty itself is generally not an effective deterrent against crime, and is only a promoter of a culture of revenge and violence at the society level. Moreover, its use by the Iranian regime indicates that the Islamic Republic of Iran is the only government in the world that uses the death penalty in an organized and purposeful, not as a punishment, but as a tool to intimidate and suppress all forms of diversity including religious and ethnic diversity in Iran.

Undoubtedly, the execution of Mr. Heidar Ghorbani, whose father was assassinated four decades ago by elements of the Iranian ruling regime, is in line with the targeted repression of Iranian Kurdish citizens who have been oppressed by the extremist leaders of the Islamic Republic for years due to their different faith.

The execution of the death sentence of Mr. Heidar Ghorbani, which was suspended by the Supreme Judicial Authority of the Islamic Republic and pending a retrial, shows that the Iranian regime is a lawless regime. Therefore, it is up to the members of the international community to redouble their efforts to help the oppressed and helpless Iranian citizens as soon as possible by increasing their efforts to reach an international consensus against human rights violations of the Iranian regime.

The IOPHR also calls on all democratic and freedom-loving governments of the world, especially the member states of the European Union, to take practical steps against human rights violations of the Iranian regime, by imposing political and diplomatic sanctions on the representations of the Islamic Republic in order to stop the regimes’ systematic oppression of religious and ethnic diversity in Iran.

It also stands to reason any inaction by international bodies like UN and European Union will be viewed by all those concerned with human rights, as an example of appeasement of the Iranian regimes’ human rights crimes against its own citizens.