IOPHR’s statement regarding the renewed death threats by the security elements of the Islamic Republic of Iran against the life of Dr. Seyed Mostafa Azmayesh and his family 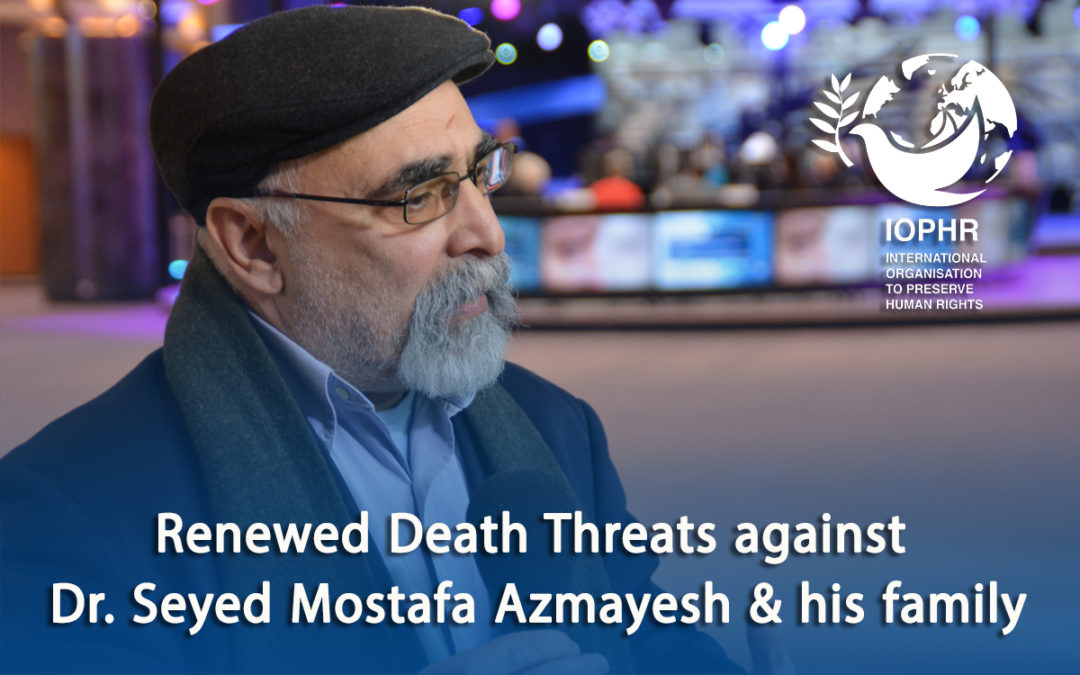 As mentioned in previous statements of this association, the instructive and anti-superstitious activities of Dr. Seyed Mostafa Azmayesh, who is a human rights activist, Islamologist, prominent jurist and an educator of Sufism and spirituality, has once again been subject of blatant threats against him and his family, by the security agents of the Iranian regime both within and outside of cyberspace.

The totalitarian Islamic regime in Iran, from the very first days of its establishment on continual basis has physically eliminated and killed tens of thousands of free thinkers both inside and outside Iran.  This campaign of eradication of all opposition, has for some time now even extended to its treatment of Nematollahi Gonabadi Sufis, as result of which Nematollahi Gonabadi Sufis’ former leader Dr. Noor Ali Tabandeh, was murdered over two years ago, under suspicious circumstance.

Since the death of Dr. Noor Ali Tabandeh, the Nematollahi Gonabadi Order, which is the largest and the oldest intellectual and spiritual organization outside the government, has been completely subjugated by the elements of the Iranian regime, who over the years have infiltrated the order, and thus now has become a tool in the service of the expansionist goals of the Iranian Supreme Leader.

In order to achieve this sinister subjugation, the agents of the Iranian security apparatus started a plan in February 2005, under which after a long period of systematic harassment, they targeted the Sufis’ houses of worship including the burning of the Sufi house of worship in Qom (Shariat Hosseiniyeh) which culminated in a gas attack on the Sufis inside. Under this menacing plan finally, in February 2018, the decision was made by the Iranian security forces to arrest of Dr. Noor Ali Tabandeh, the peaceful leader of Nematollahi Gonabadi Sufis.

However, with the timely leaked publication of a copy of the arrest warrant by Ruhollah Zam the director of Amad News (who was kidnapped in 2019 in Iraq and later executed by the Iranian Regime) the Gonabadi Sufis managed to foil their leaders open arrest, by appearing in large numbers  in front of Dr Tabandeh’s house. For this reason, the security agencies, on behalf of the entire Regime (according to Pasdar Rahimi, the commander of the Greater Tehran police force), decided to put Dr. Noor Ali Tabandeh under house arrest, and dispersed his trusted students through issuing of false statements on his behalf, by use of the Regime’s agents within the Sufi order. Whilst under house arrest, Dr Tabandeh’s health deteriorated, due to gradual poisoning so that the Regime could finally take control of the Nematollahi Gonabadi order.

During this time, the agents of the security services who controlled Dr. Noor Ali Tabandeh’s house repeatedly tried to force Dr Tabandeh to issue statements against his will, all of which were met with serious opposition and exemplary resistance by him. As a result, the security agents tried to distort or completely destroy the content of Dr Tabandeh’s teachings, by forging his signatures under false statements and orders.

Among the cases which the security agents pressured Dr. Noor Ali Tabandeh to comply with their wishes, was the proposed dismissal of Dr. Seyed Mostafa Azmayesh, Dr Tabandeh’s authorized representative abroad, from his duties, which he was asked to perform via previous direct written authorities from Dr Tabandeh. However, Dr Tabandeh resisted such pressures as he had entrusted Dr. Azmayesh with the fight against ignorance and superstition in the culture of Iran, and knew the importance of Dr Azmayesh in this fight.

Of course, the pressures on Dr. Noor Ali Tabandeh to dismiss Dr Azmayesh was not purely in regards to his role as combating against superstition in Iranian culture, but was also in regards to the implementation of the unprecedented global mission, he had given to Dr. Azmayesh via a voice recording and a written statement from 24th October 2018. In these Dr Tabandeh while asking Dr Azmayesh to continue to implement his previous missions, he also assigned him a new task, which related to esoteric training of Dr Tabandeh’s own grand-nephew, Mr. Reza Tabandeh.

The importance of this point becomes clear, when we pay attention to the system of Velayat-e-Faqih, which controls Iran, and its announcement of the beginning of the “second phase of the revolution”, which is the globalization of the “ideology of Velayat-e-Faqih”, at the same time as widespread repression and its attempts to subjugate the Nematollahi Gonabadi order. All this points to the use of the capacity of Iranian Sufism, as a means to expand the influence and power of the Supreme Leader around the world. It is for this purpose that for many years the Mustafa International Society, which is the main institution responsible for expanding the influence of the Iranian Supreme Leader in the world, has started to work closely with the security intelligence service infiltrators within the Nematollahi Gonabadi order.

Thus, it is clear that the letter dated 24th October, 2018 from Dr. Tabandeh to Dr. Azmayesh was in fact aimed at disrupting the Iranian government’s plan to use the influence of Iranian spirituality and Sufism in order to expand its influence. That is why the security agents who failed to pressure Dr   Tabandeh to dismiss Dr. Azmayesh, decided to speed up their plan to remove Dr. Noor Ali Tabandeh. All of which occurred a year later, after a long period of persecution and slow poisoning that lead to Dr Tabandeh’s death during an unnecessary surgery, which was used to cover up his murder.

Since then, the pressure and threats of security officials on Dr. Azmayesh and his family, who represent the only remaining stronghold of free thought in Sufism and spirituality in Iran, have increased sharply.  Private messages and the recent public release of threatening posts in social media have been used to threaten his life.

In one of the latest threats, one of the operators of the Sufiye News Telegram Channel affiliated with the Department of Sects and Religions of the IRGC Intelligence Organization (SAS) published a post on his Instagram page talking of the plans to murder Dr. Azmayesh followed by his dismemberment and then throwing his dismembered body parts into an acid container or the sewer. Just like the real events concerning Jamal Khashoggi, a Saudi journalist who was assassinated in Istanbul.

Such threats must be taken seriously, because the intimidators are trying to turn the Nematollahi Gonabadi order, which until the time of Dr. Noor Ali Tabandeh was the greatest herald of altruism and peace in Iran, into a mafia and murdering ring. A quick look at the recent killings of the Gonabadi Sufis who were followers of Dr Tabandeh, will no doubt show the seriousness of the situation. For example, the assassination of Behnam Mahjoubi and the recent murder of Mohammad Pour-Yousofi, all show the power of the Iranian Security agents within the Gonabadi Sufis, who are transforming the Sufi order into a mafia and a murderer ring.

Accordingly, the IOPHR would like to warn the world in regards to the ominous signs of the threats of assassinations, bloodshed and murder that have been rising from within the newly formed Gonabadi sect, which has access to a vast network of the Iranian government, connected to Sufis abroad, all of which has the potential to make this group an international assassination machine.

The IOPHR also wishes to warn all European security agencies, especially France, about the dark and undeniable record of the Islamic Republic of Iran in exploiting diplomatic immunity for terrorism, crime and murder around the world. Thus, significant extra security measures are warranted in this regard.

The IOPHR also urges the French Government once again to intensify routine security measures and to limit the activities of the Iranian Embassy in Paris. According to the records, has the Embassy has become a place for espionage and conspiracy against democracy and free thought, and take immediate action in this regard.

It should be noted that almost all Iranian embassies in European countries have a history of terrorist and destructive activities under the cover of diplomatic immunity, and in this plan, the embassy of the clerical regime in Paris plays a key role and leadership. As since 1979, a month after Shiite clerics came to power in Iran, dozens of assassinations and murders by the agents of the ruling regime in Iran have taken place in France, where Dr. Azmayesh resides.

Also in France, it was revealed that a person named “Assadollah Asadi”, a diplomat from the Iranian Ministry of Foreign Affairs, was the mastermind of a foiled bombing plan, which, if successful, could have killed more than 5,000 innocent people. Given the fact that the culpability of this diplomat of the Islamic Republic has been proven in a legal trial in Belgium, on the basis of sufficient and convincing evidence which has led to this “terrorist diplomat” being sentenced to twenty-three years imprisonment, the French security forces need to be extra vigilant. As the Islamic Republic of Iran has been proven to use diplomatic immunity in acts of terrorism!

Therefore, the IOPHR, based on the conviction and the verdict issued by the Belgian court for this “terrorist diplomat” calls for the level of political and diplomatic relations with the ruling regime in Iran, which does not value the lives of European citizens, to be reduced to a minimum, and to prevent the regime from abusing its diplomatic immunities as much as possible.

In this regard, IOPHR also once again draws the attention of EU officials to the recent threats of security agents against the life of Dr. Seyed Mostafa Azmayesh – especially given the history of assassination and murderous activities of the Tehran government based in Europe. Which at any moment could lead to the death and victimization of more European citizens!