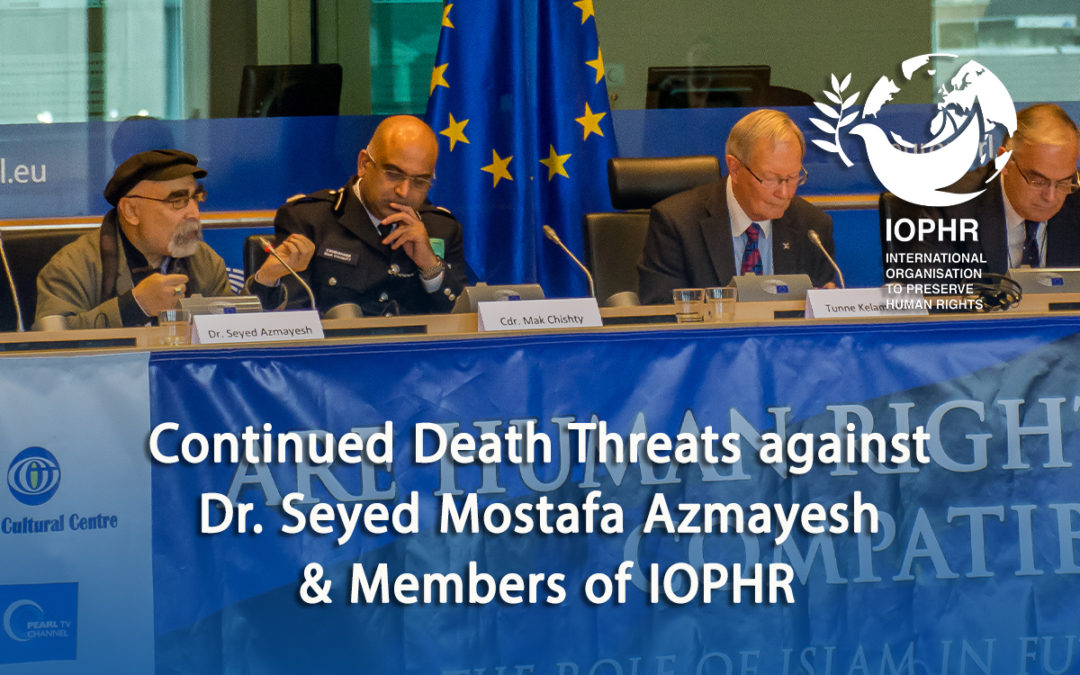 According to an audio file provided to DorrTV, Dr Seyed Mostafa Azmayesh, the Director of the IOPHR (the International Organisation to Preserve Human Rights), who is also an Islamologist, and an educator of spirituality, has once again been subject of blatant death threats against him and his family. In the audio file one, of the mercenaries of the Islamic Republic’s regime, who identified himself as one of ardent followers of Reza Tabandeh (a member of the Islamic Republic’s regime abroad, and a possible “future candidate” for next leader of the Gonabadi order) unashamedly threatened Dr Azmayesh with dismemberment.

According to further investigation, the person on the audio file who threatened Dr Azmayesh is Abbas Mohammadi, who is one of the thugs and assassins of the Iranian regime, who have taken control of the Gonabadi order. In the audio file, this person openly asks the elements within the mafia circle of Iranian regime that have infiltrated Gonabadi order, who live in Europe, to murder Dr Seyed Mostafa Azmayesh and his colleagues in IOPHR and also the members of DorrTV.

It should be noted that also on Sunday, February 6, 2022, on an Instagram account that introduced itself as the supporter of the Sufi ruling sect, and ardent follower of Reza Tabandeh, openly called for the assassination, and dismemberment of Dr Seyed Mostafa Azmayesh, the Director of IOPHR and also the murder of Vahid Beheshti, the director of the social media TV, DorrTV, and other members of the IOPHR. This Instagram account also published an address stating to be the home address of “Vahid Beheshti” in London; which was incorrect as Mr. Beheshti does not live at the given address.

In the past, Dr Seyed Mostafa Azmayesh and a group of his colleagues in the IOPHR and members of DorrTV have all been threatened with death, by the agents of the Islamic Republic. In fact just recently IOPHR issued two open statements on these threats.

It is important to note that for some time now, numerous Instagram accounts affiliated with the Gonabadi Sufis and government agents have been doing their best to extract the annual budget of DorrTV, and to discover the financial needs of this organisation via public records. It is worthwhile to note that as DorrTV has nothing to do with the affairs of the Sufis, it’s clear that all these efforts are part of the security-intelligence institutions of the Iranian regime that have infiltrated the Gonabadi Sufis. As it’s the Iranian regime’s security apparatus that wants to “switch off” DorrTV; for its one of the few media outlets that is truly independent, and provides a voice for the Iranians who are oppressed by the tyrannical Iranian regime.

It is noteworthy that the same method was used against Ruhollah Zam, the former director of the independent and popular social media site “Amadnews”, who was tricked to leave Paris and travel to Iraq, where he was kidnapped and transported to Iran and then executed.

It should also be noted that Ali Khamenei, the leader of the Islamic Republic, on Tuesday, February 7, in a speech to a group of commanders of the Air Force and Air Defense of the army, stated that the Islamic Republic was the target of a “combined attack by its enemies” and he stated: “We cannot always be on the defensive. Therefore, we must also launch a combined offensive in various fields, including the media, security and the economy.” He also added that “the Iranian authorities have a duty to make such extra efforts.”