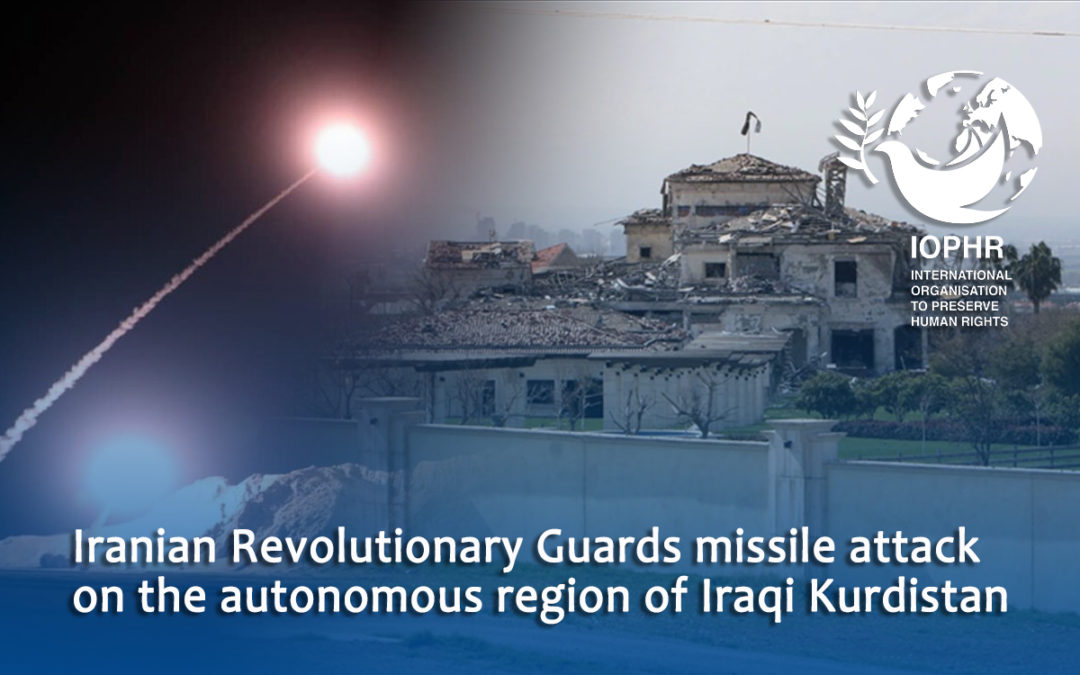 Terrified by the emergence of a democratic and federal system committed to the fundamental principles of human rights near its western borders, Tehran’s religious leaders by their recent attack are trying to destabilize Iraq. All in the hope that by attacking a system of democratization that has a potential to be a successful model for the nations of the Middle East, they can undermine democracy in the region.

In this regard, the IOPHR considers the recent launched rocket attack against civilian targets in the autonomous region of Iraqi Kurdistan, which resulted in serious damage to a television news network in the city of Erbil, as an attack on democracy in the region. Therefore, IOPHR not only strongly condemns this attack, but also sees it as an assault on the values ​​the right to freedom of expression.

This is not the first time that innocent citizens of the Iraqi Kurdistan Autonomous region have fallen victim to the Iranian regime’s resentment of fundamental human rights principles, as there have been records of dozens of rocket attacks and hundreds of bombings and terrorist operations in the Kurdistan Autonomous Region carried out by the agents of Islamic Republic of Iran.

In this regard, the IOPHR urges the authorities of this region, and the Iraqi federal government to publish the official records of terrorist operations of the Islamic Republic security forces in Iraq. Especially, in the autonomous region of Iraqi Kurdistan in order to make the world aware of the invisible and lesser known dimensions of religious terrorism perpetrated by the Iranian Regime.

One of the most recent acts of terror by the Iranian Regime, was the blatant kidnapping of Ruhollah Zam, a prominent French-Iranian journalist, from a hotel in the Iraqi capital, Baghdad, and his illegal transfer to Iran, which ultimately led to the extrajudicial execution of this brave and truthful journalist.

The assassination of many Iraqi independent journalists, including Ihab Al-Wazani and Ahmad Hassan, by agents sent from Iran, is another example of Tehran’s efforts to suppress nascent civil liberties in neighbouring Iraq.

The recent missile attack on civilian areas in the city of Erbil in the Iraqi Kurdistan region clearly shows that the rulers of Tehran do not adhere to any form of moral and human rights standards, and only seek to expand their fundamentalist influence around the world.

Consequently, the IOPHR would like to also draw the attention of EU officials and European governments and European public opinion to the bitter and undeniable fact that parts of the EU’s territory falls within the missile range of the Iranian Revolutionary Guards. Thus, if the EU security apparatus do not make serious attempts to disarm the terrorist network of Iranian Revolutionary Guards, a large part of the citizens of the European Union will remain exposed to fear of missile attacks like what occurred in the Iraqi Kurdistan region. Accordingly, the IOPHR, in order to protect the lives and rights of innocent citizens, calls for the disarmament of Iranian missile program, to be included in the EU negotiations with the Iranian government, in addition to limiting Iran’s nuclear program.

Furthermore, as it has been mentioned many times in the previous statements of this organisation, the shortest solution to the “problem” of the Islamic Republic is the resolute insistence of the international community on the need for correct and accurate implementation of human rights standards in Iran. In this regard, the IOPHR calls on all democratic governments, especially the three governments of Germany, Britain and France, as well as the European Union, to force the Iranian regime to not only adhere to nuclear and missile disarmament, but also make the Iranian government observe and implement all international human rights standards.

It should be obvious to all concerned that the negligence and disregard for the growing terrorist threat posed by the Iranian government and its subordinate institutions such as the Revolutionary Guards, to the security of the international system, will no doubt lead to repeat of catastrophic attacks like those in Iraqi Kurdistan, as well as its spread to other parts of the world, which may even include the territories of the European Union.