IOPHR’s Statement regarding the Russian military invasion of Ukraine 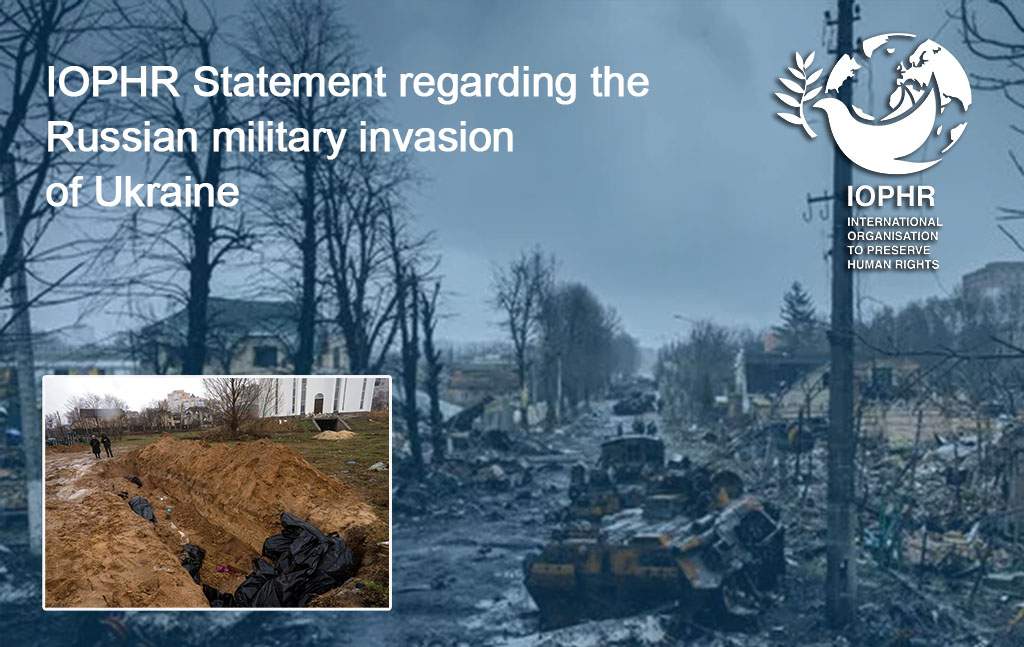 It is now more than six weeks since the Russian military invaded the beleaguered country of Ukraine and caused nothing but numerous war crimes, violations of the laws of war, rape and looting of civilian property. During this time, the Ukrainian government and its valiant people, by their exemplary resistance to the brutal Russian aggression, have proven to the world that even the world’s greatest and most powerful demonic forces can be forced into inevitable defeat and humiliation in the face of united and determined actions of the free and democratic countries.

Unfortunately, as a result of the Russian government’s helplessness against the resistance of the Ukrainian people, Russia has resorted to a heinous crime to seek revenge through its cowardly act of targeting and killing more than 450 civilians with their hands tied behind their backs. This barbaric crime is reminiscent of the massacre of more than 1,500 Iranian children and adolescents in November of 2019, who were shot in the head and chest whilst on their way to school and work by the security forces.

Accordingly, the IOPHR calls on all the people of the world, and especially the honourable people of Iran, who are themselves under great oppression, not to remain silent in the face of this massacre and to send a clear message to the dictators in the region by strongly condemning the war initiated by Russia. The IOPHR further calls on all the people of the world to support to the heroic resistance of the Ukrainian people, through the application of two principles within Sufism and Iranian culture, which are “standing up to subjugation” and “helping the oppressed”; by supporting the people of Ukraine in their struggle against the invading Russian army and its allies.

The IOPHR also notes that the oppressed and honourable people of Iran, like the heroic people of Ukraine, have been long time victims of the dictatorship that is controlling Iran through its corrupt and inhumane Wali-Faqih religious doctrine.

A simple look at the long history of Russia’s relations with Iran shows that Russia’s involvements in Iran, have always been based on abuses and oppressions that various Russian ruling authorities have been inflicting on the beleaguered people of Iran during the last two centuries. In which various Russian regimes, have used leverage and coercion, to further their interests at the expense of the Iranian people.

All of which, over the last two hundred years, has led to unjustifiable and adventurous occupation and eventual secession of more than a quarter of Iran’s territory. As well as fraudulent polices that have led to usurpation of the Iranian people’s rights in the Caspian Sea, the acquisition of monopoly economic privileges, the blatant manipulation of Iran’s domestic politics, and the pressure on Iran’s relations with other countries.

Accordingly, the IOPHR invites all non-governmental organizations in the Middle East and the Caucasus, especially the people of Iran and Ukraine, to take practical steps towards unity and solidarity, against those in power in Moscow and the ruling regime in Tehran. Especially, as the heroic resistance of the oppressed people of Ukraine towards the brutal aggression of the invading Russian army, has shown that when people come together through solidarity and empathy, they can even overcome the strongest armies in the world and force them into retreat.

The IOPHR also reminds European governments that the Russian military aggression, if successful, will not be limited only to Ukraine, as many democracies in the region will continue to be under threat of the Russian military and its allies. Therefore, all forms of appeasements of the Russian regime must immediately come to an end. As otherwise, the comprehensive and universal threat to the fundamental principles of human rights and human dignity, will be one of the least inevitable consequences of this appeasement.

The IOPHR also notes that the great people of Russia, who have made a significant contribution to the formation of human civilization through numerous contributions in the fields of science, literature and music, must also be aided in their efforts to stop Russian government’s repression of nations like Ukraine and Iran. Therefore, the Russian people’s brave efforts to stand up to their government’s aggression must also be supported by the international community.

Finally, the IOPHR, while condemning Russia’s crime against humanity in the city of Bucha, would like to stress that crimes committed without any consequences give rise to new catastrophes. Accordingly, the formation of an international fact-finding committee is necessary both in clarifying the dimensions of this crime, and to reveal the details of the murder of more than 1,500 Iranian children and adolescents by the ruling regime in Iran during the November 2019 massacre.