A letter from the International Organisation to Preserve Human Rights (IOPHR) regarding the attempt to murder Mr. Salman Rushdie, based on Ruhollah Khomeini’s fatwa, by a terrorist sent by the Islamic Revolutionary Guard Corps (IRGC): 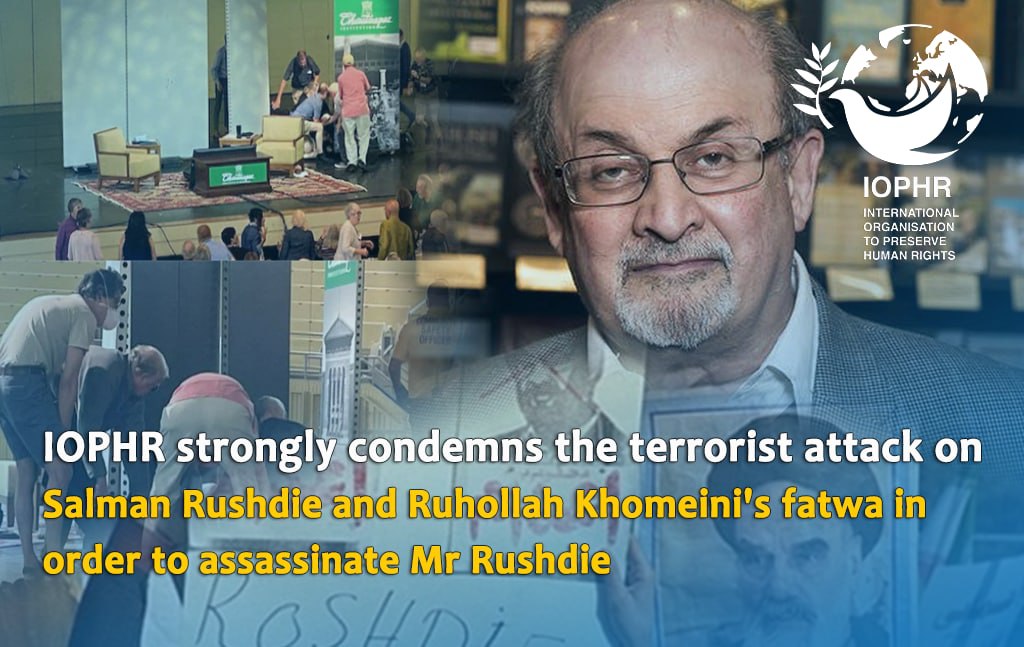 At the time Ruhollah Khomeini ordered the murder of Salman Rushdie on 14th February 1989, the ruling regime in Iran, just like today, was involved in the consequences of the scandal resulting from the revelation of the prominent role of members of its embassies in Europe in organising and implementing numerous terrorist operations. As it was during 1981-1988 that hundreds of European citizens were killed, or injured by terrorist activities of the Iranian regime outside of Iran.

As evidenced by the publication of detailed records concerning the terrorists’ acts, under the guidance of the branches within the embassies of the Islamic Republic in Europe, IRGC had targeted Madanit foundations in their brutal attacks, all of which showed that the regime of the Islamic Republic had for many years been conducting a covert war against European citizens.

The subsequent pursuit of the French police to bring to court the organizers of these terrorist operations working within the embassies of the Iranian ruling regime at that time, was met with a harsh and violent reaction from the IRGC. An example of which, was the siege of the French embassy in Tehran, and the taking of the French ambassador and his family hostage. And also the widespread attacks on European cargo and commercial ships in open waters, as well as the increase in the hostage-taking of European citizens in Lebanon.

Consequently, one can say that, Ruhollah Khomeini’s political fatwa for the murder of Salman Rushdie at that time should be interpreted as a Machiavellian act, in order to show European governments the Iranian regimes’ power. The power which the ruling mullahs possess by their dogmatic determination to take advantage of ignorance, superstition and prejudice of the masses, in order to achieve its nefarious clandestine international goals, even in the hearts of Western societies.

This belief is strengthened by the fact that Ruhollah Khomeini, in his fatwa, in a completely hypocritical manner, ordered the death of Salman Rushdie for expressing the same content, which before then, was also contained in many Shia and Sunni Islamic texts and sources, such as Tafsir and Tarikh al-Tabari. Especially, as Tabaqat Ibn Sa’d and Sahab al-Tanzil were also written, published and were even taught in some religious schools, all of which of course are still accessible to the public.

Now, sadly after three decades, once again, Western governments find themselves under the pressure of public opinion and awakened consciences, as well as the endless blackmails of the leaders of the Iranian regime, to remove the name of the IRGC from list of terrorist organisations. Even though the IRGC, is a terrorist organisation that is responsible for the pain, suffering and deaths of millions of innocent people. All these black mail efforts focused on removing IRGC from the list of terrorist originations, is its open attempt to resist being included in a global sanctions list of the United Nations, the European Union and the American Congress. While in reality IRGC is an extremely dangerous terrorist organisation with many hidden terrorist cells in the West, as demonstrated by the recent attack on Salman Rushdie.

Accordingly, the IOPHR would like to remind all awake consciences in the free world to review the numerous historical terrorist actions organised by the Iranian regime within democratic societies during the past four decades. So that they realisethat removing IRGC from the list of terrorist organisation would be a grave a mistake, and would in effect be an act of appeasement by the Western governments, and especially the European governments towards Iranian regime’s hidden terrorist agenda. Which will only embolden the Iranian regime to increase its efforts to destabilise Western democracy and increase the dangers faced by citizens of democratic countries. In fact one can say Western tolerance of IRGC, has only led to its increased activities, such as sending a terrorist to murder the famous writer Salman Rushdie.

Also, while drawing the attention of the authorities and leaders of democratic governments to their serious responsibility in maintaining the safety of their citizens, the IOPHR would like to remind them any form of appeasement towards acts of violence and cruelty of IRGC, will only embolden the ruling regime in Iran to increase its efforts, and increase the number of victims of its acts of terror in Western societies.

In conclusion, the IOPHR, as always, would like to remind the Western governments that the only way to confront the actions and terrorist operations of the ruling regime of Iran, and its proxy groups, is the honest adherence of Western authorities to human principles and values, ​​and their decisive and unconditional support for human rights in Iran, in all dealings with the Iranian regime.