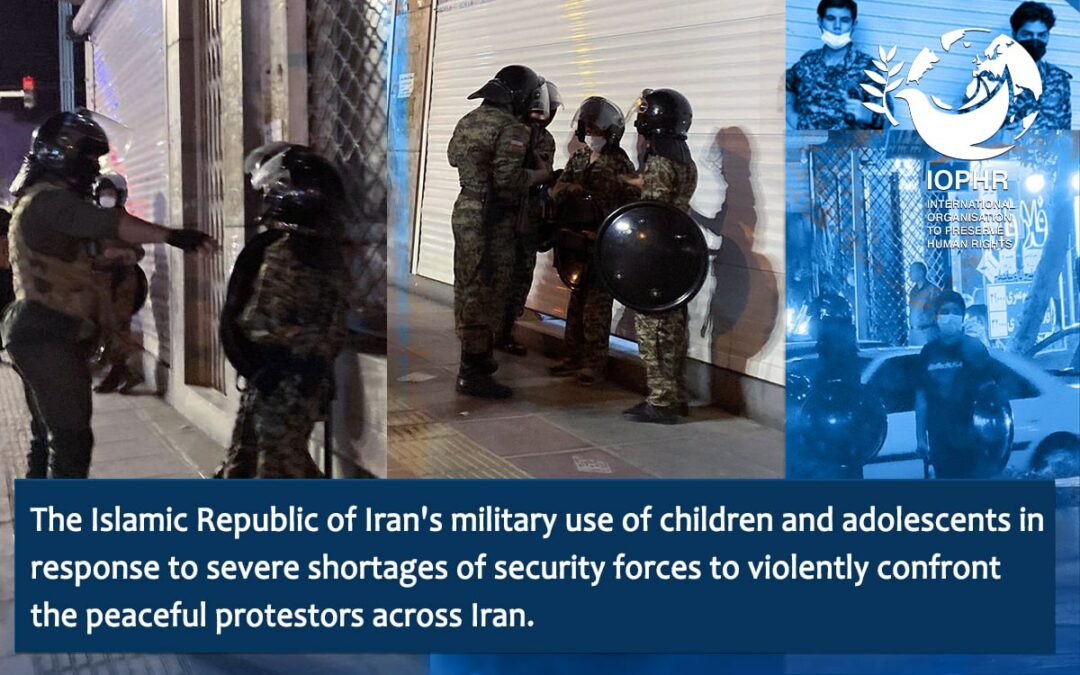 Recently, alarming news has been published about the use of children as a tool of repression and violence by the ruling regime against the peaceful demonstrations of the Iranian people.

The use of children in military operations by the ruling regime of Iran is unprecedented, and according to official statistics, out of 217,000 people killed in Iran’s war with Iraq, more than 30,000 of them were under the age of 23. All of which indicate the widespread use of teenagers and children in its wars. Also, according to the same statistics, youths between 16 and 20 years of age comprised more than 40% of the war casualties. Moreover, according to some reports, the total number of children and teenagers who were mobilized and sent to the front line by the Islamic Republic of Iran during the war exceeded half a million. These statistics clearly show that the government of the Islamic Republic, despite having an organized army, still resorted to the extensive use of children and teenagers in the war.

For example, we can mention the execution of a large number of 13-14-year-old girls in the early years of the establishment of the Islamic Republic, which was also specified in the letter dated 27th September 1981 of the late Ayatollah Montazeri to Ruhollah Khomeini. In fact according to some reports, more than 240 students under the age of 17 were executed without a trial on 27th September 1981.

Furthermore, according to Amnesty International’s report, a large number of victims of the massacre in 1988, in which President Ebrahim Raisi was one of the perpetrators, were less than eighteen years old, and according to the same report, in line with the torture of innocent and defenceless children, many parents of the children were also shot in front of their children.

However, Iranian children are also victims of human rights violations by the ruling system in many other aspects such as: child marriage, sexual slavery, forced labour, deprivation of education, religious and ethnic discrimination, acts of violence under the name of religious education, torture, punishment, long-term imprisonment (especially during adolescence), with the sole aim of the juveniles reaching the age adulthood, so they can be executed. Moreover, military extortion are other common cases of violation of the rights of children and adolescents in Iran.

All these cases are violations of the provisions of the Convention on the Rights of the Child approved in 1989, of which the Islamic Republic is one of the signatories. For example, according to paragraph two of article 38 of this convention, the signatory governments are obliged to take any practical measures to ensure that people under the age of 15 do not directly participate in hostilities.

However, based on indisputable evidence, the Islamic Republic system has not only failed to fulfil its obligations towards this convention, but by creating short-term military training courses for children from the age of seven, they have practically involved children in military training and guerrilla warfare.

As an example, we can refer to the report of the state news agency IRNA on October 1st 2016, according to which, the Islamic Revolutionary Guard Corps established a military camp near Mashhad called “Revolutionary Children’s Park” and created a military training course for children even under the age of seven. In the published photos of this military camp, children under the age of seven can be seen training with weapons in their hands. The geographical location of this military camp in the east of Iran and near the border with Afghanistan should not be overlooked, where the largest number of Afghan immigrants live, and there are no available statistics on the number of these children and teenagers.

Recently, based on similar news from numerous and very reliable sources, the repression machine of the Islamic Republic of Iran is using children to compensate for the loss of security and law enforcement forces in their violent confrontation with the peaceful protesters, who are demonstrating for the abolishment of the mandatory hijab law.  According to these reports, due to the non-cooperation of various sections of the society with the government in dealing with the demonstrators, the intelligence agencies have faced a severe shortage of forces and have resorted to mobilizing and equipping children to compensate for this shortage. It should be noted that not long ago, a song called “Salam Commander” was made and published in which children under the age of eleven expressed their loyalty to the leader of the system.

All these evidences show that the authorities of the ruling regime in Iran, despite their international obligations, are arming children in order to use them in the violent and bloody suppression of the peaceful demonstrations of the Iranian people.

In this regard, it should be noted that in all societies, children are considered to be the most precious and fragile future assets. Thus, arming children against other members of society is very dangerous for the future of that society, and even humanity, and will cause irreparable damages.

On this basis, while drawing the attention of all officials, and activists and national and international organizations related to children’s rights, the IOPHR requests them to use all available means to force the authorities of the Islamic Republic to respect the rights of children.

The IOPHR especially requests UNICEF, based on its inherent mission, to use all available means, including the suspension Iranian membership from UNICEF, to force the authorities of the Islamic Republic of Iran to stop arming children and using them in their military and security operations.

The IOPHR warns all the governments of the world, especially the democratic governments, regarding the very dangerous and unpredictable consequences of appeasement and silence against the military use of children by the Islamic Republic, and reminds that children are vulnerable and their protection is the humanitarian and international duty of all the nations of the world against the evildoers of the ruling system in Iran.