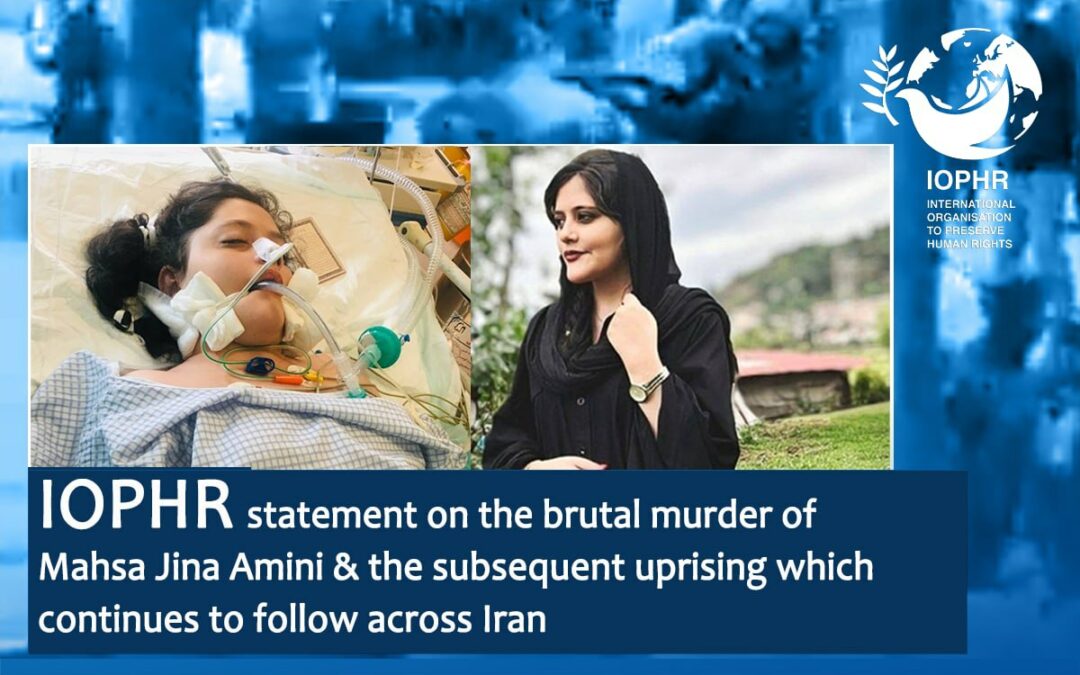 As it has been pointed out many times before in the statements of IOPHR, gender equality, ethnic and religious diversity have always been the main victims of the systematic and organized oppression of the ruling regime in Iran.

The Iranian government’s murder of Mahsa Jina Amini, a 22-year-old Kurdish girl living in Saqqez, by the impact of a blunt object on her head, resulting in skull fracture and brain damage, is yet another example of the unforgivable discriminatory approach of the Iranian ruling system towards its citizens. It is also a clear and undeniable example of the regime’s policy of indoctrination and discrimination against ethnic and gender related issues.

The murder of Miss Amini under the pretext of not covering her hair, although it is not the first case of arbitrary murder committed by Iranian security agents, is probably the drop that led to the overflow of the patience of the oppressed people of Iran. The people of Iran, who represent one of the most authentic and ancient cultures of history, are now tired of hate-mongering, looting and killing, and thus have openly come out to the streets to show their disdain for the Iranian regime’s policy of ethnic and gender oppression.

In response, the Iranian system, which is terrified of people’s anger and is incapable of a healthy interaction with the international system, had promised to deal with this unrest.

The Iranian president, Ebrahim Raisi, who himself is accused of crimes against humanity, is currently in United States and is spreading the Iranian regime’s hate mongering propaganda at the United Nations,  as a result of appeasement by Western governments and the United Nations.

Ebrahim Raisi’s only response to the mass protests in Iran and murder of Miss Amini, was to shamelessly refer to the murder of Miss Amini as a case under review. All the while not even a single case of this kind has ever been investigated in the history of judiciary of the Islamic Republic of Iran.

For example, the cases of Mrs. Zahra Kazemi, an Iranian-Canadian journalist, who was killed by a blow to the head and a fractured skull. Zahra Kazemi, Hoda Saber Siamakpour, and Sattar Beheshti, who were all killed by the Iranian security forces, are just some of many other thousands of cases that have never been solved and their perpetrators have never been identified and brought to justice.

The belief in injustice of the Iranian regime is strengthened by the fact that the government has resorted to blatant violence against justified and legal nationwide demonstrations of the Iranian people in areas such as Kurdistan. As according to reports, at least fourteen people in different Kurdish areas have been murdered, as a result of direct firing by the Iranian security forces. During these protests, many unarmed protesters have sadly been killed, and hundreds have been injured as result of direct assault by the Iranian security forces.

In this regard, the IOPHR would like to points out that the holding of demonstrations according to Article 27 of the Iranian Constitution is completely permitted and justified, and does not require obtaining permission. Therefore, the security forces’ violent response to these demonstrations should be subject to criminal punishment.

Considering that the arrest of Miss Amini, who was arrested under the pretext of not conforming to compulsory hijab laws, the IOPHR, while supporting the will of Iranian women and girls to assert their right not to wear Hijab, condemns the reactionary and inhuman law of compulsory hijab, and states that the choice to cover one’s hair is a personal right, and no government, institution, organization, or person has the right to deprive Iranian women of this legal right.

The IOPHR would also like draw the attention of all the world to the important point that the peaceful and continuous demonstrations of the Iranian people, show the political illegitimacy of the ruling system of Iran, and clearly show the Iranian regime’s lack of popular base. Consequently, Ebrahim Raisi, who is accused of crimes against humanity based on numerous evidence, should not be considered as a representative of the Iranian people, and his presence as the President of Iran both in the United Nations and in the United States should be viewed as illegal and illegitimate.

Based on this, the IOPHR demands the immediate cancellation of Ebrahim Raisi’s political immunity, and the issuance of an arrest warrant against him by the US government on charges of crimes against humanity.

Finally, as previously pointed out many times by IOPHR, any negotiations with the ruling regime of Iran will never reach a successful conclusion without consideration of the very complex issues of human rights in Iran. As such, negotiations and even agreements with the discredited Iranian regime will always lack legitimacy in the eyes of the Iranian people.