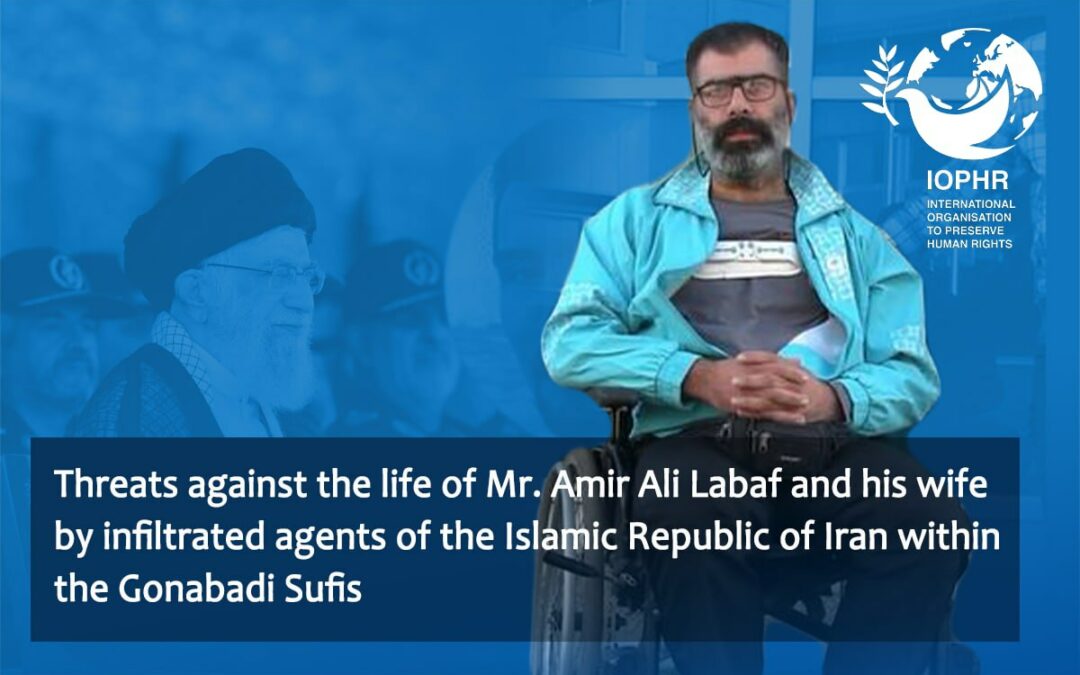 On the evening of 6th September 2022, Mr Amir Ali Labaf, a human rights activist’s life was threatened by a group of agents of the Islamic Republic of Iran within the Gonabadi Sufi order, who also threatened to assault and rape Mr Labaf’s wife.

According to the file that was provided to the popular media channel “Dorr TV”, two of the mercenaries of the Islamic Republic regime within the “Governmental Sufi group”, threatened the human rights activist Amir Ali Labaf and his wife.  Amir Ali Labaf is one of the eyewitnesses of the 7th Golestan incident, in which members of the Iranian security forces forcefully assaulted, and arrested a large number of Sufis during the February 2018 Sufi protests.  Mr. Amir Ali Labaf was arrested on the night of the 7th Golestan incident, but was able to escape from the hands of security forces 20 days later, on one of his trips to the hospital after being severely tortured and beaten, and subsequently, Mr. Amir Labaf managed to escape Iran altogether.

In an interview with media groups, Mr Labaf revealed the threats that he and his wife had received from the agents of the Islamic Republic of Iran who have infiltrated the Gonabadi Sufis, and provided audio evidence of these threats, in which Mr Labaf ‘s life is explicitly threatened and his wife is also threatened with rape and assassination.

In the audio file, the perpetrators also state that “whatever crime we commit, we are backed by God, through our connection to the current leader of Gonabadi Sufis, Seyed Alireza Jazbi.”

It is necessary to remind readers that in the Islamic Republic of Iran, all assassinations must have a religious and Sharia justification and basis; that is, they must be based on  a “Fatwa” or religious decree, which is why in the audio file, one can hear Farshid Mahjoubi blatantly say: “Whatever crime we commit, we are backed by  God’s guardian”, meaning that their actions are backed by a “Fatwa” from the “Government controlled Council that now runs the Gonabadi Sufi group”, which is chaired by Seyed Alireza Jazbi.

It is clear from this statement that the Iranian regime’s agents within the Gonabadi Sufis, like Farshid Mahjoubi, are brainwashed into thinking that their actions are part of a “divine command” which they are obligated to carry out. All of which point to a very dangerous situation that is currently running within the “Governmental controlled Sufi order”.