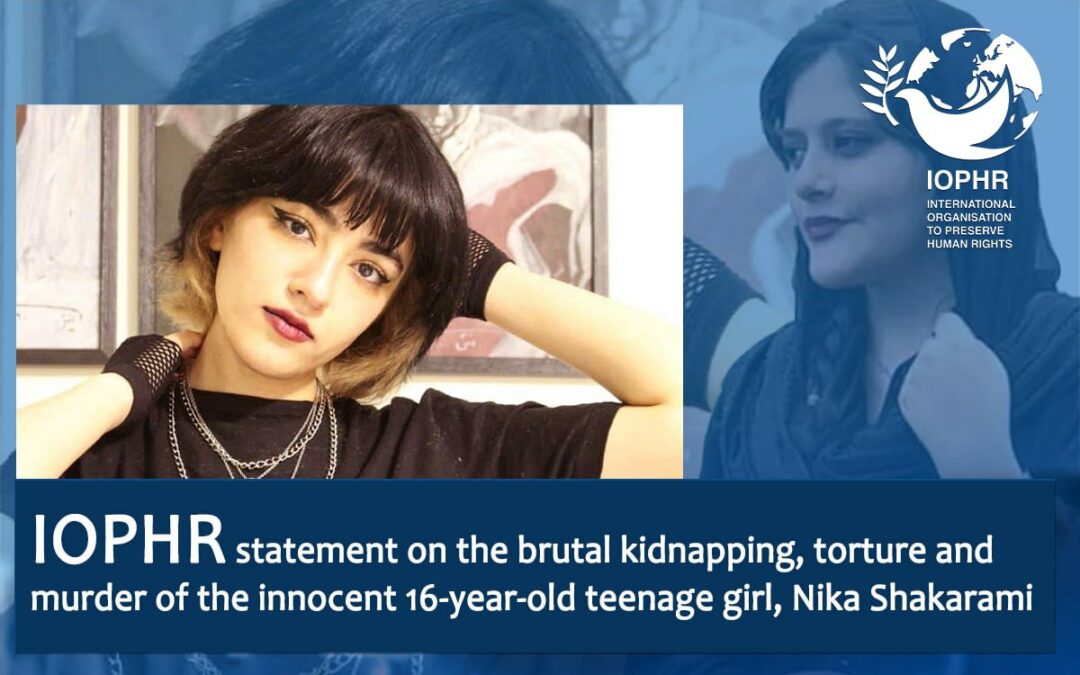 In continuation of the daily crimes and oppressions of the ruling regime of Iran on the people of Iran, a very shocking news has recently been published about the kidnapping, torture, and the murder of a sixteen-year-old Iranian girl known as Nika Shakarami.

Nika Shakarami, a 16-year-old teenage girl, an Iranian citizen, who, according to recent news reports was kidnapped by the Islamic Revolutionary Guard Corps on 20th September 2022, was tortured and assaulted by the members of the Revolutionary Guards Corps for at least nine days.

Moreover, very reliable reports indicate that the innocent Nika Shakarami died in pain as a result of continued torture and deprivation of even the least minimal care, and her body was thrown down from the top of a four-story building in order to cover the cause of her murder.

In this regard, according to official reports, Nika Shakarami’s uncle and aunt have been arrested, and forced to confirm the Iranian government’s official account of their daughter’s death in an interview with Iran’s National Television. They have also been warned that they must refrain from openly discussing the death of their teenage daughter, otherwise, their other family members will be killed like Nika.

Furthermore, there have been worrying news in regards to the manner of death Nika Shakrami as scars on her body may be the signs of possible post-mortem removal of Nika Shakarami’s internal organs. As eyewitness reports speak of seeing a long tear and a stitch marks from Nika Shakarami’s lower jaw area to her lower abdomen area. While according to the official forensic report, the death of the 16-year-old Nika was due to multiple blows from a blunt object. Therefore, if Nika Shakarami’s death was the result of blunt force to her skull, then there should be no need for her body to be opened-up after her death. As such signs according to some experts are usually indications of an attempt of post-mortem removal of internal organs from a victim.

On this basis, IOPHR would like to draw the attention of all human rights activists, lawyers, officials of democratic governments, representatives of legislative assemblies around the world, especially European Parliament representatives, as well as international human rights organizations, especially the United Nations High Commissioner for Human Rights to the extremely dire and unusual situation of human rights in Iran. As the treatment of Iranian teenage girls like Nika Shakarami, Mahsa Amini and many others by the current Iranian regime are all clear examples of crime against humanity, which the international community should not watch with silence and indifference. As these cases are appalling examples of violations of all forms of human rights.

In this regard, the IOPHR would like to once again remind the international community that the torture, rape and murder of Iranian girls and women is an abhorrent act that has the official approval of the authorities of the Islamic Republic of Iran, with the aim of implementing their hateful policy of al-Nasr al-Rab, (suppression by extreme cruelty), which has been conducted by the Iranian regime for years!

The IOPHR would also like to state that the courageous and sustained uprising of the Iranian people against the Iranian ruling dictatorial system is a clear and undeniable sign of the political and legal illegitimacy of the current Iranian ruling system.

Based on all these facts, conducting any type of negotiation and concluding any type of possible agreement with the current ruling regime of Iran is not only immoral, but it will have no legal validity, and will not form any obligation for the future government of Iran, which is freely elected by the people of Iran. Therefore, IOPHR requests that the international community terminate their political and diplomatic relations with the Islamic Republic of Iran and expel all elements affiliated with this anti-human system from their soil.