IOPHR statement on the Islamic Republic’s disturbing plans to take further innocent lives, through the issuance of more death sentences, including children as young as 15! 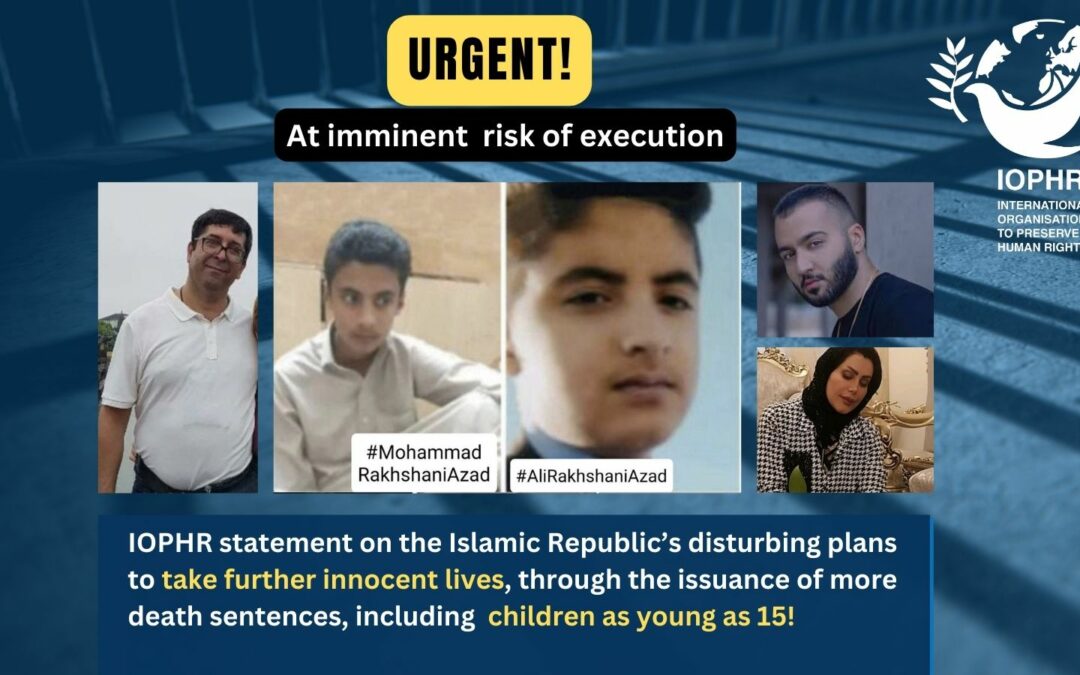 Once again, one of the promising youths of Iran has become a victim of the tyrannical blood-thirty regime ruling Iran. As the young Mohsen Shekari, who in response to the innate human desire for freedom wanted to change Iran, sadly did not get the chance to experience the twenty-third spring of his life. According to the official government report, Mohsen Shekari was hanged by the enemies of the Iranian people, only two and a half months after his arrest on the simple charge of blocking the street.

The International Organisation to Preserve Human Rights (IOPHR) has been appalled by the governmental killing of Mohsen Shekari, as part of the Iranian government’s implementation of its old and hateful policy of ‘victory through forced terror’. IOPHR would like to point out that the insistence of the ruling regime in Iran on the implementation of this hateful policy, will only increase the determination of the Iranian people to overthrow this inhuman regime and will only accelerate its overthrow.

The murder of the innocent Mohsen Shekari, by the government has once again confirmed the bitter truth that the Islamic Republic of Iran is the number one enemy of the Iranian people, and that continued appeasement with this criminal system will lead to the loss of the most precious assets of the Iranian people, i.e. the youth and children who only want to enjoy a normal life like those in other societies. Therefore, it is obvious that the only way to stop this type of bloodshed and killing of the Iranian people, is to overthrow this inhuman regime as soon as possible.

Moreover, very alarming news has been published about the possibility of the execution of more innocent people by the ruling regime in Iran. As Dr. Hamid Qara Hassanlou a Gonabadi Sufi, who only provided medical aid, based on his professional oath, to some of the victims of the recent attacks by the government forces, is also facing the possibility of execution. Dr Qara Hassanlou was arrested and after being severely beaten and tortured, was taken to court in his hospital uniforms, and on his very first hearing, was charged with muharibeh (enmity against God) and was promptly sentenced to death. The IOPHR consider the issuance of the death sentence against Dr. Qara Hassanlou as another oppressive step of the Iranian regime to increase pressure on religious and ideological minorities.

This Gonabadi Sufi has been sentenced to death only for performing his professional duties as a physician, while the murderers of more than hundreds of Baloch women and children roam free and have not been prosecuted or dealt with!

There have even been worrying reports published by reliable sources about the possibility of execution of two children in Zahedan city, Iran. Mohammad Rakhshani Azad and Ali Rakhshani Azad are two 15- and 16-year-old teenagers from Sistan and Baluchistan province who were sentenced to death, without the presence of a lawyer in their trials in Zahedan, the capital of this province. These two teenagers have been sentenced to death under the charge of ‘enmity against God’, while according to Iranian laws, due to their young age, they do not even have the right to open a bank account for themselves.

The death sentences for these two children, were issued behind closed doors and without the presence of their lawyers, and they were practically denied any opportunity to defend themselves, which is an obvious and recognized right in judicial trials around the world.

It is obvious that this inhuman act of the Islamic Republic of Iran in issuing the death sentence for these two innocent children, is regime’s attempt to put pressure on Baloch citizens to give up their legal demands for freedom, and the sentence itself lacks any legality.
Iranian regime’s issuing of death sentences against these two teenagers and killing nearly seventy children by its security forces are all clear violation of the provisions of the Convention on the Rights of the Child approved in 1989, which the Islamic Republic of Iran is a signatory to.

In other news, according to the published sources, Mr. Toomaj Salehi, an Iranian singer who was forcefully arrested and subjected to the most severe tortures, has also been accused of Moharebeh (enmity against God) for supporting the legal demands of the Iranian people, and is in danger of being sentenced to death.

Furthermore, according to reports, Ms. Fahimeh  Karimi, a volleyball coach and mother of three young children, who was arrested during the suppression of Pakdasht protests, has been accused of sedition and was also sentenced to death during a trial conducted behind closed doors and without the presence of a lawyer.

In this regard, the International Organisation to Preserve Human Rights (IOPHR) considers the issuing of death sentences for artists and sports figures such as Mr. Toomaj Salehi and Mrs. Karimi as part of the Iranian regime’s implementation of the policy of victory through forced terror, with the aim of creating terror among famous figures, as means of preventing other famous figures from joining the recent popular protests.

Consequently, the IOPHR calls on all people around the world, especially Iranian citizens inside and outside the country, to rise up and protest against the issuance and execution of all death sentences! Especially the executions of death sentence for Toomaj Salehi, the popular Iranian singer who risked his life for liberating ideals of his countrymen, and the death sentences of two innocent Baloch children, who came to the streets to show their solidarity and empathy with their countrymen, especially their Baloch countrymen, in order to show their unity against the Iranian regime’s tyranny.

The IOPHR would like to once again drawn the attention of all international organizations and forums to the very serious and critical situation of children in Iran, and especially calls on the United Nations Children’s Fund, UNICEF, to suspend the membership of the Islamic Republic of Iran due to the regime’s widespread violation of human rights.

Moreover, the IOPHR also draws the attention of all human rights groups, international forums and democratic governments to the dire situation of all detainees in Iran, especially those who have been charged and convicted for ‘enmity against God’, and asks them to use all available means  to pressure the government of the Islamic Republic of Iran to prevent the issuance and execution of all death sentences.