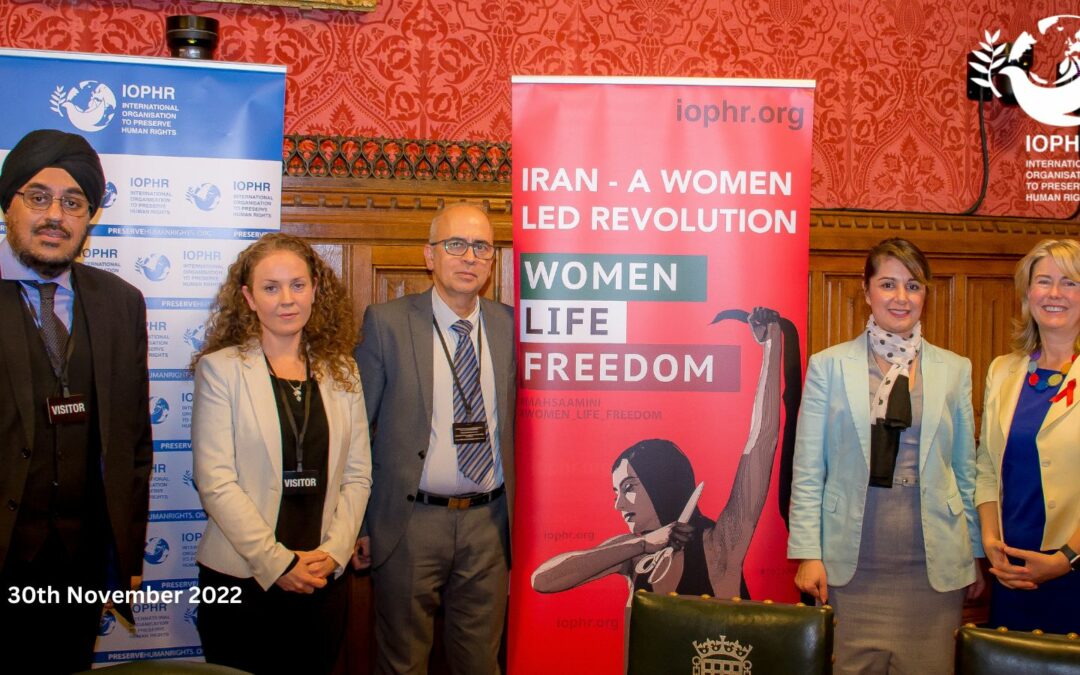 On the 30th of November, IOPHR held a successful and informative event at the UK Parliament on the human rights situation in Iran and the recent uprising which was sparked by the killing of Mahsa Amini. The event was well visited by ministers, delegates of embassies as well as the the IOPHR legal team and the press.

Anna Firth MP, as well as the Leader of the House of Commons, The Right Honorable Penny Mordaunt MP and Chair of the Women & Equalities Committee, Caroline Nokes MP spoke and supported the event. IOPHR Director Cllr Mattie Heaven and Senior Policy Advisor Afshin Sajedi shared their views and made statements on the importance of limiting any further engagements of the UK government with the Iranian regime.

Mattie Heaven said: “It was an honour to speak in the House of Commons, addressing Members of Parliaments about the gross human rights violations that are taking place in Iran at the hands of the Iranian regime, especially with the recent uprising that started after the killing of #mahsaamini for not wearing her hijab properly. Iran’s ruling regime does not have any geographic borders when it comes to spreading its ideologies, oppression and terrorist activities. We continue to see Journalists and Human Rights activists threatened to death inside and outside of Iran, who are highlighting the brutality of the Islamic Republic against it’s own innocent citizens. I spoke about how important it is right now to support the innocent women & children of Iran who are being oppressed, imprisoned or killed, purely for wanting to live in a free and democratic country. And, I also spoke about the dangers that the Iranian regime poses to our freedom and democracy in the UK and around the world through its funding of terrorist activities and spreading fundamentalism. Iran’s ruling regime has been strategically working towards weakening the very fabric of western civilisation by undermining our democracy through the Al-Mostafa university, which has branches in more than 60 countries, of which 5 are based in UK, under the title of “Islamic Centre”.

IOPHR is calling for Iranian diplomats to be expelled, embassies shut & Islamic Centres affiliated with IRGC including Al-Mustafa Int’l Uni to be sanctioned.