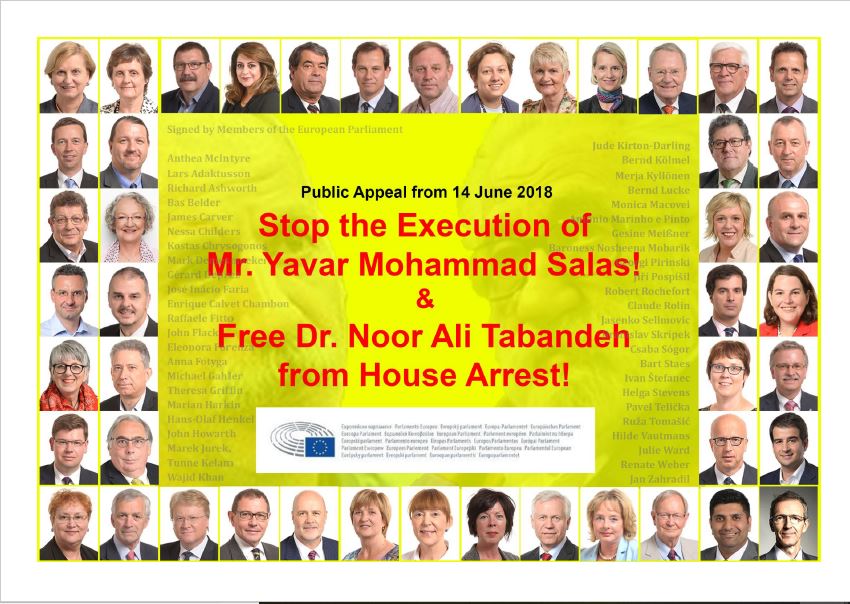 The Iranian Regime is pushing for an unjust and forced execution of a Gonabadi Dervish by the name of Mr. Yavar Mohammad Salas, an innocent man sentenced to death by the Iranian Supreme Court as of 24th April 2018. Mr. Salas appealed against this death sentence, and his case was sent to the Supreme Court (Branch 35). On 13 June, 2018, the Supreme Court rejected his appeal, and the Judge of the Supreme Court stated that they know that Mr. Salas is innocent with all the evidence given, however, they are under immense pressure from the head of Judiciary system to execute Mr. Salas.

This proves just how dangerous the conditions in Iran are, where there is no independence of Judiciary, and innocent lives have no value. The Supreme Court, which is supposed to be the highest judicial authority in Iran, is unable to make its own rulings and is being forced to implement the orders of the Regime. The Iranian officials have announced that they will execute Mr. Salas after the month of Ramadan, which ends in two days’ time.

Mr. Salas has been wrongfully convicted of the murder of three police officers, despite the fact that the case against him remains incomplete and unsubstantiated. During the trial, a number of evidences came to surface that proved Mr. Salas’ innocence, including eye-witness testimony and photographic evidence, however they were completely ignored by the court. There is also the existence of numerous legal and procedural violations during the pre-trial and trial process – with Mr. Salas being forced to confess under duress, lack of access to legal representation, and failure to observe the defendant’s legal and procedural rights as articulated by Iranian constitution and penal code. These violations alone should have nullified the case as per the Iranian penal code. Mr. Salas has been threatened, tortured and denied his fundamental right to a fair trial, and is now facing execution for a crime he did not commit.
The regime is suppressing and persecuting Sufi Gonabadi Dervishes solely due to their religion/belief system. Senior officials representing the regime have explicitly stated in their public statements that one of the top priorities of the regime is to target and attack all Dervishes in Iran through nationwide ethnic cleansing. Furthermore, the regime has also targeted the spiritual leader of this Gonabadi Sufi Order, Dr. Noor Ali Tabandeh, who has been placed under house arrest since 20th February, 2018. At the age of 91, Dr. Tabandeh is suffering from severe leg pains and is in need of full time medical assistance. The Regime and Police Forces have created a situation of solitary confinement for Dr. Tabandeh, cutting all forms of communication, and denying him of critical medical care or assistance. If these circumstances persist, it will fatally impact his life.
We call on the Supreme Leader of Iran to take immediate action to put an end to the injustices and human rights violations taking place, by stopping the inhumane execution of Mr. Yavar Mohammad Salas and freeing him of all charges, and ordering the immediate release of Dr. Noor Ali Tabandeh from house arrest. We call on the Iranian Judiciary to uphold Mr. Salas’ fundamental right to a fair trial. We condemn the suppression of religious and ethnic minorities and prisoners of conscience, and call to stop the persecution of Gonabadi Dervishes in Iran, and for the immediate release of detainees who have been imprisoned because of their beliefs.
European Parliament, 60 rue Wiertz, B-1047 Brussels – [email protected]
We call to uphold fundamental human rights, prisoners’ rights, the right to freedom of religion, thought and conscience, and restore Dignity, Freedom and Justice as set out in the international conventions.
Signed by Members of the European Parliament:
Anthea McIntyre, ECR, UK
Lars Adaktusson, EPP, SE
Richard Ashworth, EPP, UK
Bas Belder, ECR, NL
James Carver, EFDD, UK
Enrique Calvet Chambon, ALDE, ES
Nessa Childers, S&D, IE
Kostas Chrysogonos, GUE/ NGL, GR Mark Demesmaeker, ECR, BE
Gérard Deprez, ALDE, BE
José Inácio Faria, EPP, PT
Raffaele Fitto, ECR, IT
John Flack, ECR, UK
Eleonora Forenza, GUE/ NGL, IT
Anna Fotyga, ECR, PL
Michael Gahler, EPP, DE
Theresa Griffin, S&D, UK
Marian Harkin, ALDE, IE
Hans-Olaf Henkel, ECR, DE
John Howarth, S&D, UK
Marek Jurek, ECR, PL
Tunne Kelam, EPP, EE
Wajid Khan, S&D, UK
Jude Kirton-Darling, S&D, UK
Bernd Kölmel, ECR, DE
Merja Kyllönen, GUE, FI
Bernd Lucke, ECR, DE
Monica Macovei, ECR, RO
António Marinho e Pinto, ALDE, PT
Gesine Meißner, ALDE, DE
Baroness Nosheena Mobarik, ECR, UK
Georgi Pirinski, S&D, BG
Jiří Pospíšil, EPP, CZ
Robert Rochefort, ALDE, FR
Claude Rolin, EPP, BE
Jasenko Selimovic, ALDE, SE
Branislav Skripek, ECR, SK
Csaba Sógor. EPP, RO
Bart Staes, Greens/ EFA, BE
Ivan Štefanec, EPP, SK
Helga Stevens, ECR, BE
Pavel Telička, ALDE, CZ (EP Vice-President)
Ruža Tomašić, ECR, HR
Hilde Vautmans, ALDE, BE
Julie Ward, S&D, UK
Renate Weber, ALDE, RO
Jan Zahradil, ECR, CZ

Statements by Dr. Katrina Lantos Swett, the Former Chair of the US Commission on International Religious Freedom, and the Vice-President of #IRFSummit2022, regarding political prisoner #ZainabJalalian. https://t.co/SyjLKQI9p2
View on Twitter