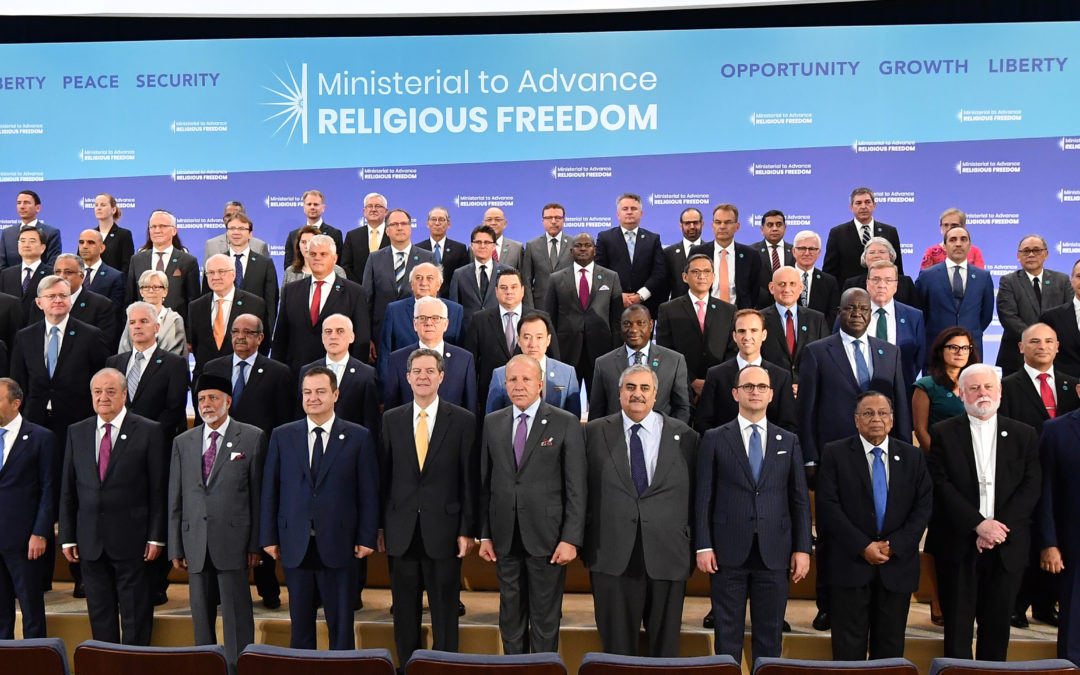 WASHINGTON US Department of State – The second annual Ministerial to Advance Religious Freedom (MARF) conference, started on 16th July 2019, and continued until the 18th July.

16th July 2019 – On the first day, the conference saw many emotional moments as victims of religious persecution from across the globe, shared their testimonies. The overflown auditorium was filled with people representing many nations and religions worldwide.

The conference began with a speech by Sam Brownback, US Ambassador-at-Large for International Religious Freedom who stated:

“We’ve hit a nerve here, people want religious freedom and they want it now. And we see it as a global crisis around the world that has received far too little attention, a global crisis that we are determined to reverse.”

Representing IOPHR at this conference, Dr. Hamid Gharagozloo urged the EU to stop its support for the Iranian regime and bring its policy on Iran in line with the US, as the Iranian regime’s ideology is fundamentally based on oppression of all minorities.

The keynote speaker of the conference, US Secretary of State Mike Pompeo stated: “All people from every place on the globe must be permitted to practice their faith openly.  In their homes, in their places of worship, in the public square, and believe what they want to believe.” Mike Pompeo also said his own Christian belief compels him to fight for the freedom of others not just in the United States, but around the world.

The organisers of the MARF Conference noticed that currently 80 percent of individuals worldwide live in a religiously restricted environment.  They’re hoping that the conference, now in its second year, will mark the beginning of a global human rights movement centred on religious freedom.

17th July 2019 – On the second day of the MARF Conference, discussions took place about widespread crackdowns on religious freedom around the world, including the suppression of Yazidis, Bahia’s, Christians and Sufis.

In their conversations, the IOPHR representatives presented the US authorities with the list of 126 Gonabadi Sufis who have been imprisoned in Iran merely for being a Sufi. The IOPHR team further stressed that people in Iran can simply be arrested for their religious beliefs as the Iranian regime openly oppresses all minorities whether they are religious minorities like Bahia’s, Christian converts or Sufis or ethnic minorities.

18th July 2019 – The MARF Conference ended by a statement from Sam Brownback, US Ambassador-at-Large for International Religious Freedom, on the importance of combating religious oppression on a worldwide basis. Mr Brownback also mentioned the importance of the number of global grassroot movements in support of religious freedom and urged for positive actions by governments to support religious tolerance.

Earlier in the day, US Vice-President, Mike Pence addressed the conference on importance of religious freedom over the world:

Following the conference the US state department issued a statement on United States’ concerns on religious freedom in Iran. In this statement they urged Iran to uphold the rights of religious minorities and in particular the rights of Christians, Baha’is and Gonabadi Sufis.

At the closing ceremony Dr. Hamid Gharagozloo and Shahrareh Afshari (IOPHR) met with Sam Brownback concluding that great ties were made between the 106 nations present at this largest Human Rights conference at the US State Department ever held. All participants and the organisers of State Department agreed that this conference reflected the current global need and awareness to keep working hard towards more advancement in global religious freedom and are all very motivated to do so.

Find here all the streamed videos on the MARF conference. IOPHR likes to thank the US State Department for this great initiative and support for religious freedom.

This article was compiled from excerpts from US state department.