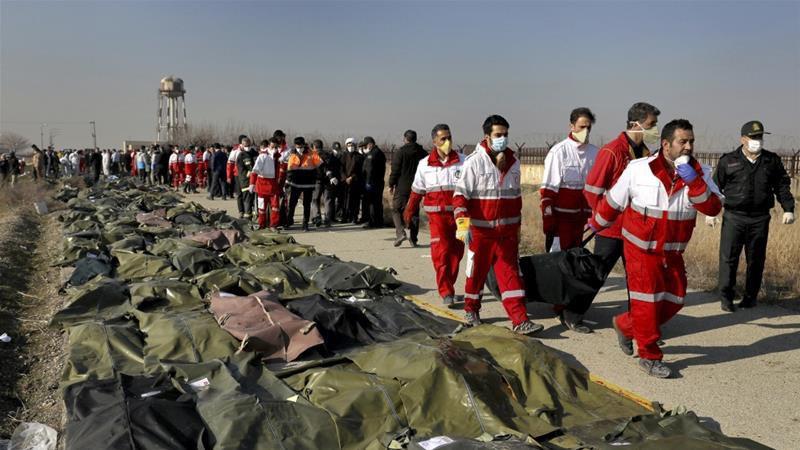 Unfortunately, as each day passes in the life of the Islamic Republic of Iran with its current behaviour, it seems to be accompanied with a new tragedy that creates irreparable damage to our society and to the lives of those who live in the shadow of the Iranian regime.

However, the catastrophic downing of Ukrainian Airline’s Boeing 737-800s Flight 752 that took place on Wednesday morning, 8th January, only six minutes after the boarding of its 176 passengers, is one of the darkest episodes in the current Iranian regime’s chronicles. But given the regime’s record and its practices no doubt it will certainly not be the last.

At the same time, the secrecy, lies and deception of the Islamic Republic’s officials following the incident have also added to the complexity of the issue.

On the one hand, the Iranian President and the Iranian Foreign Secretary have stated in their statements that the aircraft was mistakenly shot down because of the ‘war space’ created by the US; but on the other hand they do not clarify how in a so called ‘war space’ a civilian aircraft was allowed to take off in the first place.

IOPHR believes that accepting the Iranian authorities’ claim that the downing of the civilian aircraft was not deliberate, at the same time throws serious doubts about regime’s ability to operate in other areas involving complex technology, like nuclear technology. For example, isn’t it also possible that a ballistic missile with a nuclear warhead could be mistakenly fired in the future?

IOPHR believes, given the Iranian regime’s long record of eliminating its opponents by any possible means, we should not, in the light of this record, easily dismiss out of hand the possibility of deliberate shooting down of the Ukrainian aircraft, especially given following reasons:

Given the statements by the Iranian President, the Iranian Foreign Secretary, the commander of the IRGC, and other Iranian officials, that the Iranian airspace was in effect a ‘war space’, and given the expectation that the American forces were expected to respond to the Iranian forces’ missile attacks on US bases in Iraq, one can postulate that the shooting down of the Ukrainian aircraft may have been part of deliberate plan to  blame the downing, after the event, on American forces, in order to create a large wave of anti-American sentiment with the aim of mobilizing world public opinion against the US, the supposed enemy of Iran.

This hypothesis also explains the reason for the aircraft being targeted at a height of 2400 meters, as it is an altitude commonly used by fighters during their attacks.

In addition, all Iranian government officials and media, immediately following the news of the downing of the Ukrainian airliner, pointed their finger of blame at the Boeing Company, and even the country’s national airline immediately released a list of Boeing aircrafts already under suspicion of having technical issues. With the release of this list, the statement also contained the wish that the crash of the Ukrainian plane, would lead to the bankruptcy of Boeing, a US manufacturer!

All these evidences go against the Iranian Regime’s claims of this disaster being due to human error, but may indicate the deliberate targeting and shooting down of the Ukrainian plane and the murder of one hundred and seventy-six innocent passengers.

There have already been some suspected deliberate downing’s within Iranian airspace, including the alleged downing of the ATAR Airlines passenger plane flight 72. Also the disappearance of Asman Airline flight, which disappeared from the radar screen on Sunday, 18th February 2018, on Tehran-Yasuj route, which crashed on a mountain near the city of Semirom in Isfahan. This aircraft carried more than twenty environmental experts who had provided sensitive information about the Islamic Revolutionary Guards’ nuclear activities the day before. It should also be noted that for unstated reasons the aid to crash site was deliberately delayed by 48 hours.

Also, according to undisputed evidence, the downing of Boeing 747, Pan Am Flight 103, which exploded over Lockerbie, Scotland on Wednesday, 21st December 1988 was carried by the order and financing of the Iranian regime.

IOPHR also would like to draw worldwide attention to how Iranian authorities initially reported the incident and have continued to do so.  As from the very first moment of the incident, the Iranian media used the term “enemy soldier” in reference to the crash of the Ukraine flight and its victims. It was only after the formation of a global consensus to uncover the secrets of the incident that the Iranian authorities were forced to confess to the shooting down of the plane.

Undoubtedly, the continued quest of Canada, the US and Ukraine to clarify the darker aspects of the incident has played a key role in forcing the Iranian authorities to admit their involvement in the tragedy. In this regard, IOPHR would like to ask the larger public in the world, that if the disaster had occurred for a domestic flight, would the officials of the Islamic Republic of Iran have been so forth coming and so readily admit their guilt to its citizens?

This kind of behaviour reflects the undeniable fact that the Islamic Republic’s system will have to be held accountable in the arena of global consensus. In this regard, IOPHR calls for an international committee to be set up which consist of impartial experts, to investigate all aspects of this tragedy and in particular any  violation of Human rights that has occurred due to the actions of the Iranian regime by shooting down the Ukraine airliner.

Finally, IOPHR extends its condolences to all the distressed families of this disaster, also pointing out that international disregard of such criminal acts will no doubt create new disasters in the future.