IOPHR Statement in regards to commemorating the brutal massacre that followed the November 2019 peaceful protests! 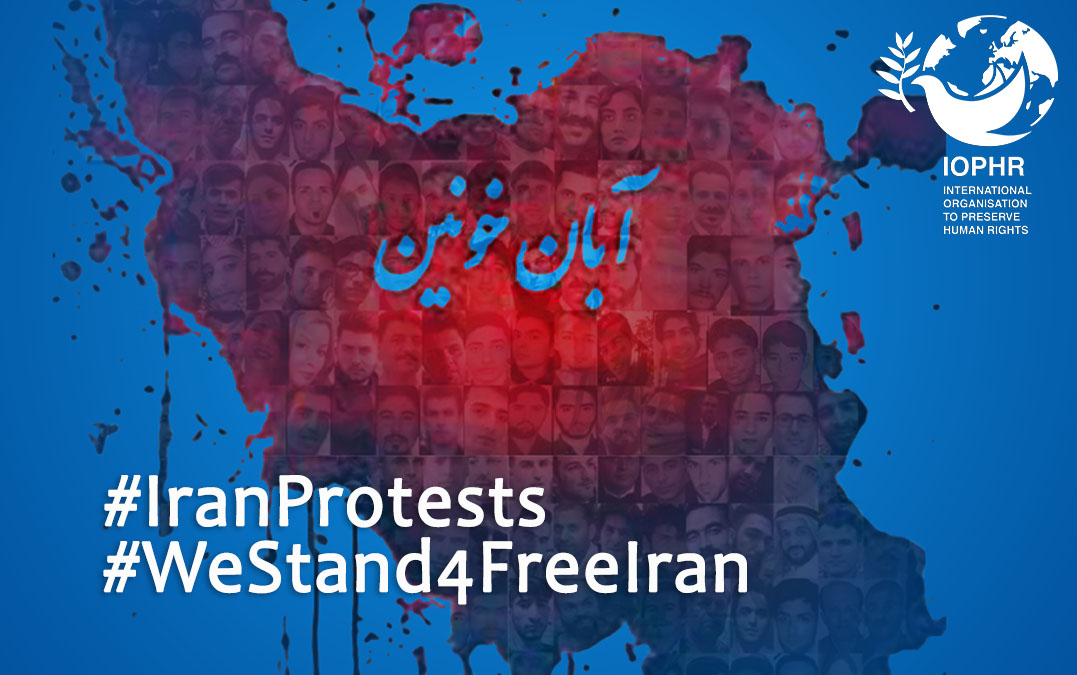 Every year, November reminds us of three cruel episodes for the Iranian people:

The first occasion is the shameful act of a group of people, who climbed the wall of the US embassy in Tehran on the 13th of Aban 1358 (4th November 1979), who then looted and stole the embassy’s property, and subsequently took the US diplomats hostage. All of these hostages, possessed diplomatic immunity and were guests of the Iranian people. What is worse, is perhaps the attribution of this heinous and disgraceful act to the honourable people and culture of Iran.

The second occasion is the brutal and cowardly murder of the late Mr. Sattar Beheshti, an honourable wage earner and a courageous Iranian blogger, which occurred on the 13th  of Aban (3rd November 2012). Mr. Beheshti was arrested and transferred to an unknown location just a few days prior, on 30th October 2012, on charges of “acting against national security through activities on social networks and Facebook.” During his interrogation by the FATA police, (Iranian Cyber Police), he was subsequently tortured and murdered a few days after his arrest, on November 3rd of that year.

The third episode is the 15th November 2019, brutal massacre, and extermination of the Iranian people who had staged a very peaceful demonstration to protest the sudden increase in gasoline prices by the government forces. Reports and videos of the massacre clearly show that security forces – as in previous cases – destroyed homes and vehicles, as well as demolished, and burned public property, such as banks and government buildings, as a pretext for further killings of the innocent protestors.

It should also be noted that although the Islamic Republic has a long history of slaughter, repression and massacres in its forty-year record, what distinguishes the November 2019 massacre from the other recorded cases, is the deliberate and brutal targeting of Iranian youth and in particular teenagers. Some of whom were shot and killed directly by the security forces whilst on their way back from school.

Obviously, the bitterness of these three disturbing memories will never be erased from the public mind and Iran’s history. It remains a fact that the unjustified occupation of a foreign embassy – ​​contrary to all recognised national and international values – brought prosperity, luxury and extravagance, to those responsible for these acts.  Some of whom actually ended up sending their children to the same countries, the embassies of which they had occupied. However, for the people and the country of Iran, this act led to enormous and indescribable soul wrenching and material damages, such as the imposition of international sanctions, the payment of billions in damages, the loss of international prestige, and, worst of all, the exclusion from the global community. All of which has caused incalculable harm for future generations of Iranians.

Although the ruling regime of Iran has always tried, for more than forty years, to falsify its legitimacy by misleadingly attributing this heinous act, as means of gaining international credence and anti-western legitimacy. However, fortunately, this uncivilised act has not been accepted by any civilised member of the Iranian nation.

Accordingly, and in order to remove the destructive effects of this sinister act, from the fate of the Iranian nation, IOPHR invites all free-thinking Iranians around the world, regardless of their beliefs and ideals, to distance themselves and show their abhorrence in regards to this act. Through an international campaign that condemns this illegal act in the eyes of the international community and thus help to eradicate this sinister day from the Iranian cultural calendar. Moreover, IOPHR also proposes that the 13th of Aban of every year become a day in the Iranian calendar to commemorate the memory of the victim of freedom of speech, Sattar Beheshti, and to for this day to be known as the “Freedom of Speech Day”.

Furthermore, IOPHR proposes that November 15th (24th Aban) of every year, also be designated in Iran as the “Student Day” to commemorate the hundreds of innocent Iranian children and adolescents who were gunned down, as they returned from school. Most of whom were shot in the head and chest in the cruellest manner, all of whom were the target of hatred by the enemies of the Iranian people. Thus, in this way, the innocent victims of this atrocity are remembered and recorded in the memory of humanity forever.