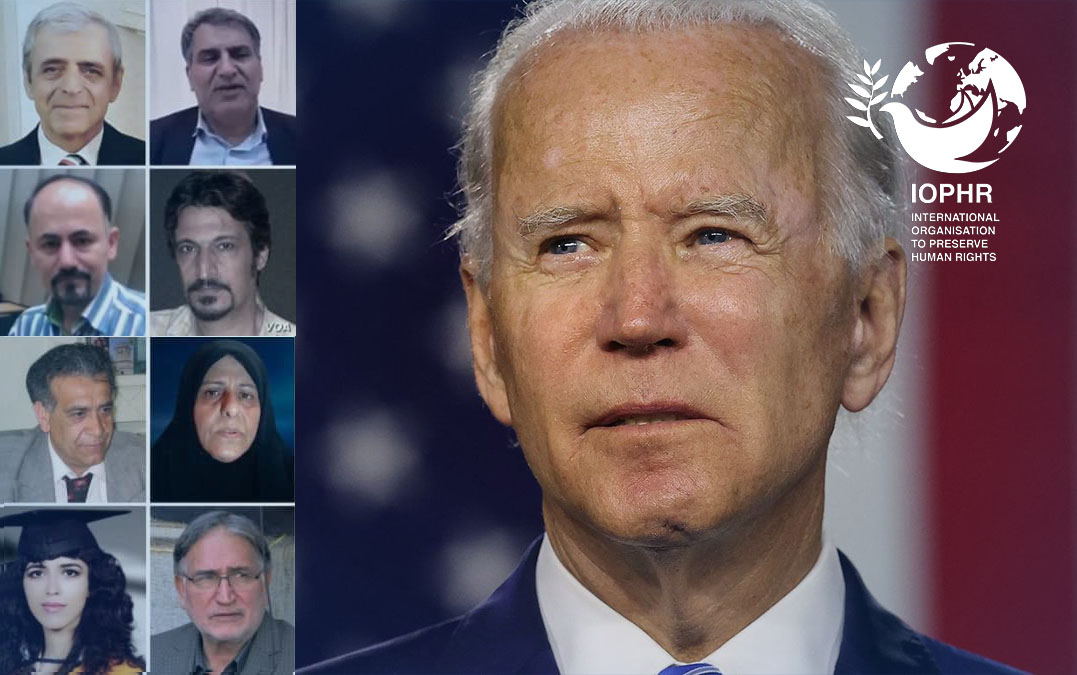 On the 1st February, an open letter was sent to the new US President Elect Joe Biden by prominent and leading figures from Iran, the Coalition of Committed for a Secular Democratic Constitution in Iran, to ask the US government to maintain maximum political, diplomatic, and financial pressure on the regime in order to prevent any further destructive influence in the Middle East and the rest of the world.

The letter was signed by 38 signatories, and among them are many who have been arrested or imprisoned in Iran for their peaceful and social activism. The signatories of the Coalition of Committed for a Secular Democratic Constitution in Iran advised the US President to strongly support the Iranian people and their wish for a secular and democratic government . Easing sanctions on the current regime will only give more power to Iran’s ruling regime, and thus lead to more suffering and human rights violations.

As IOPHR has pointed out in previous numerous statements, sanctions are an important way to disable the current Islamic Republic of Iran and its international web of influence. Thus, all governments and groups interested in world peace should work hard to remove all forms of lifelines to the current Iranian regime.

Therefore, IOPHR also supports the Iranian dissidents in their plea for maintaining current sanctions with the aim of forcing the Iranian government to adhere to international human rights and stop the suppression of its citizens and all opposition voices in Iran.

Open Letter to the Honorable Joseph R. Biden President of the United States of America

We extend our congratulations on your election as the 46th President of the United States of America. Best wishes for
the success of your Administration.

We, the signatories of the Coalition of Committed for a Secular Democratic Constitution in Iran, would like to take this
opportunity to bring to your attention the vital necessity of the alignment of people of Iran’s interest in their relationship
with the United States in particular, people of Greater Middle East and the international community at large.

Since 2015, the aspirations of the Iranian people for a Secular and Democratic Constitution have appreciated,
significantly. Following the JCPOA agreement, when Iran received substantial financial benefits, the Islamic Republic
lost a major opportunity to implement meaningful welfare reforms for its people, to stop its malign behavior, and pursue
a policy of harmony and peaceful coexistence with the regional countries. Instead, the regime spent billions of dollars
gained from the Iran nuclear deal on exporting its totalitarian ideology by providing funds to terrorist networks,
developing missile technology as offensive leverage to dominate the Persian Gulf and beyond, and causing chaos in
the Middle East.

As you may know, Iranian people for a long time have been expressing their discontentment with Islamic Republic
Government and their determination for a fundamental change. The nationwide protests in the Winter of 2017-2018
and in November 2019 are the latest affirmation of the Iranians resolve in establishing a democratic rule of law. The
regime’s brutal security forces confronted the non-violent protestors, silenced their voices, killed more than 1500
Iranians, and arrested more than ten thousand innocent people.

In June 2019, the Declaration of 14+14 was drafted and signed in Iran. The signatories represent a sample of the
cross-section of Iranians. The Declaration has the support of millions of Iranians demanding the resignation of Ayatollah
Ali Khamenei (under the Islamic Republic Theocratic Constitution) and the elimination of the Islamic Republic
Constitution in favor of a non-violent transition to a Secular Democratic Constitution through an organized referendum
under the supervision of the United Nations and other appropriate international organizations.

Today, despite the regime’s brutal confrontation against protesters and the lack of proper medical planning against the
COVID-19 crisis, Iranians continue their protests and strikes against the Islamic Republic and Ayatollah Ali Khamenei,
nationwide. The theocracy in Iran has lost its legitimacy with its people. In March 2020, the absolute majority of people
in Iran demonstrated the lack of legitimacy of the Islamic Republic by boycotting the parliamentary elections.

The events in Iran in conjunction with the signing of the Abraham Accords signals a significant geopolitical shift in the
Middle East. Indeed, the Islamic Republic is experiencing a decline in its influence in Syria, Lebanon, Iraq, and
throughout the Greater Middle East. As a result of this momentous reality, the Islamic Republic Theocracy is on the
verge of collapse.

Mr. President, we firmly believe that the new political reality in Iran and the Middle East has provided the Iranian people
with a historic opportunity to achieve a peaceful transition to secular democracy. Therefore, we respectfully request
your Administration to take the following factors under advisement in your Iran policy:
• Recognition of the majority of the Iranian people’s aspiration and interest for a Secular Democratic Constitution
over the survival of the Islamic Republic Theocracy;
• Maintaining maximum political, diplomatic, and financial pressure on the regime;
• Advocacy for human rights in Iran and release of all political prisoners and those imprisoned for their personal
views;
• Supporting the Iranian’s determination in seeking a secular democratic government through a non-violent,
free, and fair referendum.

Ms. Ehteram Abdous
ا ت حر ام ع بدوس
Human Rights Activist – “The mothers of the Laleh Park”, a group of
mothers that their children have been killed or detained since 2009 protests

Honorable Janet Yellen
The United States Secretary of the Treasury

Reached by numerous testimonies that the IRGC has used various chemical gases during the attacks on peaceful civilians in the Kurdish-dominated parts of Iran. The outside world cannot continue to be silent. #MahabadMassacre
View on Twitter