IOPHR statement on the need to immediately terminate the infamous agreement between the Iranian regime and the Chinese government, known as the Strategic Agreement 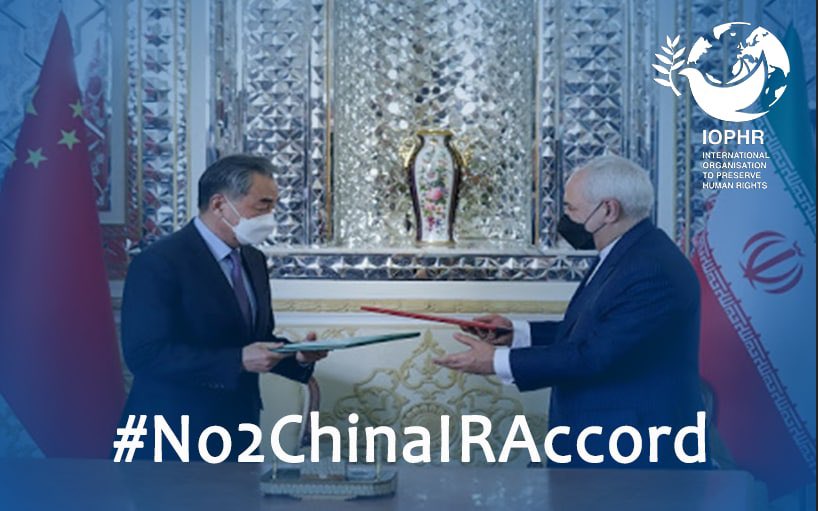 The publication of reports about the disreputable agreement between the leaders of the ruling regime in Iran and the Chinese Communist Party has caused a great deal of concern. What raises these concerns is the refusal of the parties to clearly disclose the details of this agreement.

Moreover, according to a spokesman for the Iranian government, the Iranian government has no intention of releasing the details of this agreement, as it is the Chinese side that does not want the details of the agreement to be announced. If these statements are true, then one can surmise that the “neo-colonial” Communist Party of China has devised a very dangerous plan to seize Iran’s vast resources.

By looking at the performance of Chinese government officials in countries with low transparency, such as: Djibouti, Ecuador, Tonga, Maldives, Republic of the Congo, Malaysia, Kyrgyzstan, Cambodia, Niger, Sri Lanka, Laos, Zambia, Samoa, Vanuatu, Mongolia, Venezuela and many other countries, it is clear that the Chinese Communist Party, by bribing corrupt officials in these countries, forces them to sign long-term credit agreements with high interest rates. Then, when these countries are unable to meet the Chinse government’s outrageous terms, the natural resources of these countries are taken over by the Chinese Communist Party.

In many of the above mentioned cases, the debt of these countries to China is more than 20% of their GDP. Thus, the Chinese Communist Party has now become the largest creditor on the planet! Moreover, even though so far more than a few thousand loans have been given by the Chinese government to more than one hundred countries, yet the details of even of one of these loans has hitherto been published. Additionally, not a single successful case of Chinese Communist Party investment has been reported in these countries.

In all of these countries, governments, after failing to repay their debts, have made their resources available to the Chinese Communist Party for free and indefinitely, and this is indeed the secret of China’s rapid economic growth in recent decades.

According to some information more than 50% of the total GDP of the world economy is currently owed to the Chinese Communist Party.

An examination of investment cases in some countries about which information has been published, such as Ecuador, show that the Chinese are deliberately investing in projects that are deemed to be unprofitable by expert. So that when these projects fail the governments of these countries will be forced to cede their natural resources to China in exchange for their inability to repay the loans.

Thus, it can be concluded that the insistence of the Chinese government officials not to disclose the provisions of the agreement between Iran and China is due to their fear of revealing a plan that they have devised to seize the rich resources of the Iranian people.

In addition to the above points, studies show that the Chinese Communist Party, in the form of an adventurous project called One Belt-One Road, seeks to establish a great Chinese hegemony in the Eurasian region, by taking over all land and sea transportation routes in this region.

The project’s aim is to ostensibly revive the Silk Road, where eventually the Chinese Communist Party establishes its undisputed dominance over all natural resources, as well as transportation routes in the Eurasian region. Thereby, giving China (at least economically) more power than all the European and American powers.

As far as Iran is concerned, this agreement, which ultimately turns Iran into a satellite country of China, denies the country’s independence and freedom of the Iranian people, and undermines the territorial integrity of Iran, as it contains unconventional and shameful commitments, which are partly listed below:

The abolishment of the right to prosecute Chinese citizens’ crimes in Iran is one of the provisions of this shameful agreement.

It should be noted that some time ago, there were reports of Chinese ships shooting at the boats of Iranian fishermen, and killing at least two Iranian fishermen. However, unfortunately no report was published on how this crime was prosecuted. Therefore, it is clear that the transfer of the right to prosecute the crimes of Chinese nationals in Iran is one of the provisions of this agreement. The abolition of Iran’s jurisdiction to prosecute crimes committed by Chinese government citizens in Iran is one of the serious concerns of the IOPHR. The transfer of jurisdiction over the crimes of citizens of a foreign state to the legal representative of that state is called “capitulation.”

It should be noted that capitulation or giving up the right to judge foreigners, which was common in the nineteenth century and during the rule of the Qajar dynasty in Iran, was finally banned forever in 1928 and during the rule of Reza Shah Pahlavi, and this ban was approved by the Iranian National Assembly. Unfortunately, it now seems that more than ninety years after the date of the permanent abolition of “capitulation” in Iran, the leaders of the ruling regime in Iran are once again trying to revive “capitulation” of a Chinese variety. This means that if a Chinese man commits a crime on Iranian soil, and for example, kills an Iranian, Iranian courts will not be able to hear this case.

In this regard, the IOPHR expresses its deep concern over the establishment of a “Chinese capitulation” system in Iran. Thus, in this regard, asks all experts, thinkers, human rights activists, political parties, and groups inside and outside the country, and all members of the real opposition inside and outside the country to stop such “capitulation.”

According to reports on the provisions of the 25-year Iran-China Strategic Memorandum of Understanding, the leaders of Iran’s ruling regime have agreed to hand over parts or all of their military bases and barracks to the Chinese military. In this regard, the IOPHR warns the Chinese Communist Party that any military presence of Chinese nationals on Iranian soil, especially in military uniform, violates Iran’s territorial integrity and is considered an invasion of the Iranian people and goes against Iranian citizens’ right to defend themselves against foreign aggression.

A good example of such a case is Venezuela, which by signing a 20-year cooperation agreement with China, it hoped to develop its oil industry. However, not only did it not achieve this goal, but the Chinese, despite their promises plundered the country’s oil resources, eventually destroying Venezuela’s oil industry during the first few years after the agreement was signed. As a result, making the world’s most oil-rich country one of the world’s poorest, and the most in need.

The Chinese Communist Party has not used indigenous forces in any of its previous projects, and all projects have been carried out using labour imported from China. Obviously, paying Chinese citizens a multiple salary and benefits, in addition to paying travel expenses, mission fees and away-from-home fees, etc., in addition to the financial cost of these high salaries and benefits compared to the use of indigenous forces, imposes costs on the project, which eventually leads to the bankruptcy of the project. Which in turn increases the unemployment rate, and ultimately destroys employment opportunities in the country. In other words, the implementation of this agreement will eventually make Chinese citizens richer and Iranian citizens poorer. ‌

The One Belt-One Road initiative of the Chinese Communist Party consists of two major parts: Part One is China’s control of land transport routes, and part two is its control of sea lines.

In addition, underwater resources will be at risk. It should be noted that the illegal implementation of “bottom trawl” within the twelve miles of the southern coast of Iran by more than one hundred and twenty Chinese fishing vessels and their use of very small nets in recent years, has led to the complete destruction of the country’s aquatic resources, which in turn has bankrupted at least 300,000 Iranian fishermen and magnified the erosion of seafood such as fish and shrimp in Iran’s southern ports.

China’s domination of Iran’s southern ports also leads to its military domination of the Strait of Hormuz, which is one of the ten strategic straits in the world, which will have very dangerous and unfortunate consequences for global security.

According to some reports, the Russian government, which considers Iran a part of its sphere of influence, has protested to the Iranian rulers over the 25-year strategic agreement and demanded similar concessions in the Caspian Sea, and northern Iran.

In this regard, recently even one of the members of the Iranian parliament has expressed worrying statements and stated that concessions similar to those given to the Chinese Communist Party should be given to the Russian government.

Accordingly, the IOPHR warns both the Iranian Government and the Chinese Communist Party, as well as the Government and the Duma of Russia, that in accordance with Article 153 of the current Iranian Constitution, which states: “that all agreements in regard to culture, the army and other resources of the country are forbidden.” This agreement and any similar deals with any other country, is contrary to the provisions of the Iranian constitution, and is generally prohibited and has no legal validity.

Furthermore, the IOPHR also notes that the current regime in Iran lacks legitimacy and that the new system of government that will soon be established by the Iranian people in Iran will never take up and accept the obligations set out in these shameful agreements.