IOPHR Statement in Support of the Nationwide Strikes in Iran 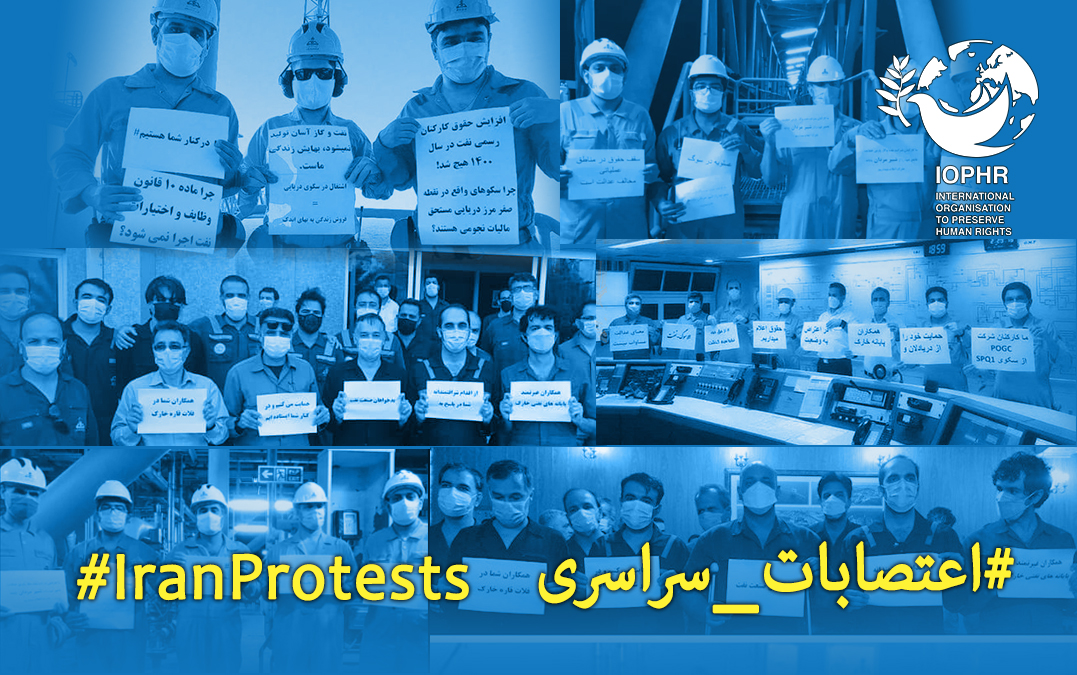 The right to strike has been a legal right for more than one hundred and fifty years for all citizens in a democratic society, as means of mass civil disobedience, protesting against unfavourable working conditions, inequality of labour practices and the lack of a proper mechanism for resolving disputes. Therefore, the right to strike is a recognized act in all democracies around the world.

This right has also been recognized directly, or indirectly in many international conventions, including the Charter of the United Nations. In particular, in paragraph 4 of Article 8 of the International Covenant on Economic, Social and Cultural Rights of the United Nations General Assembly, adopted on December 16, 1966, to which Iran is a signatory. Therefore, Iran is legally obliged in making the necessary amendments to its laws in this regard.

The United Nations-affiliated International Labour Organization, of which Iran is a member, has also enshrined the “right to strike” under various conventions, such as Convention No. 87 of 1948 on Freedom of Association and the Protection of the Right to Organize and Establish Independent Trade Unions. Convention No. 98 of 1949 on the “right to form trade unions and the right to collective bargaining” and Recommendation No. 92 on the recognition of the “right to voluntary conciliation and arbitration”.

Unfortunately, in spite of all the international requirements, the leaders of the Islamic Republic have been neglecting their obligations in this regard, for more than forty years! Instead, they have shied away from their responsibilities by preventing the adoption and amendment of relevant laws. The Iranian regime has also used sabotage and intimidation, to prevent the formation of trade unions independent of the government, which is a legal and guaranteed right for all Iranian citizens and guarantees the protection of their labour rights.

In this regard, the IOPHR would like to point out that considering the fact that the regime of the Islamic Republic has worked to thwart strikes and prevent legal rights of Iranians to strike, the officials of this system can never be relied on as the arbitrator of legality and justification of the strike; especially in the wake of recent widespread strikes throughout the country. Therefore, any attempt by the Iranian regime to act in such manner must be met with suspicion and be seen as means of violating “citizenship right” to strike.

The IOPHR also notes that the establishment of trade unions independent of the rule of law is a specific right of Iranian citizens under international conventions, especially the conventions of the International Labour Organization, which Iran has signed, but has acted contrary to its commitments. Furthermore, the Iranian regime also has refused to make the necessary amendments to the relevant national laws. Consequently, any disruption or sabotage by the government in the establishment and operation of trade unions and trade unions independent of the government should be considered a violation of civil rights and be strongly condemned.

In conclusion, the IOPHR, while announcing its full support for the nationwide strikes of workers, teachers, students, employees and other oppressed sections of Iranian society, calls on all labour organizations and unions around the world to declare widespread support for nationwide strikes in Iran. Moreover, it urges these organisations to help their brothers and sisters in Iran as much as possible, by pressuring their respective governments to reduce political and economic ties with the ruling regime in Iran, which according to the latest election results clearly lacks legitimacy.