Event: The State Of Human Rights In Iran by National Press Club 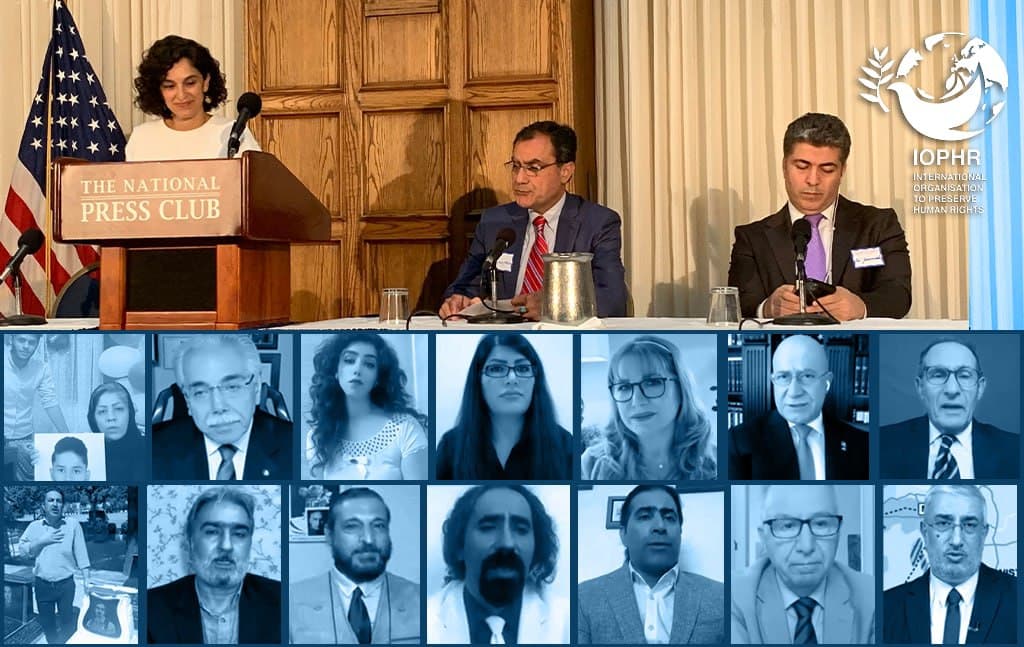 US Representative of IOPHR, Hamid Gharagozloo, was one of the speakers at the 30th June event “The State of Human Rights in Iran: Live Reports from Iran by Eyewitnesses & Experts” which was organised by National Press Club and held in Washington D.C. The full video of the event can be seen here.

Many prominent speakers from all over the world were sharing their views at the event about the harrowing aspects of the Iranian regime and its current Human Rights situation. The full list of speakers:

Hamid Gharagozloo’s speech can be read below or seen from here.

“To paint a clear picture of the current reality in Iran, he highlighted several points:

· Iran has the most educated population in the region, second only to Israel. There are over 17 million Iranians with college degrees or greater.

· Iran is the fifth richest country in the world in terms of natural resources.

· More than two-thirds of Iranians were either children at the time of the Iranian Revolution or were born after the Revolution, and have therefore not experienced any other form of government. Despite a lifetime of intense indoctrination and brainwashing beginning in elementary school, the vast majority of Iranians – over 90%, as clearly indicated in the last presidential election – desire a regime change and a representative, democratic form of government that not only respects but also protects the rights of all groups and individuals.

Despite such vast human and natural resources,

· Iran holds the top spot in the world for executions and hangings in relative terms, and second only to China, a country with 17 times Iran’s population, in absolute terms.

· Iran consistently ranks among the worst countries with respect to its rampant and systematic corruption, misery index, rate of poverty, and drug addiction.

· The primary source for the distribution of highly addictive and dangerous drugs, at very low prices and primarily among the frustrated youth, is the occupying regime in Iran. Drugs are used as a means to prevent uprisings among young people.

· Iran is the only country in the world where the sale of organs and body parts is not only legal, but is in fact facilitated by the government. For a mere few dollars, the young, educated, and unemployed are driven to sell their organs as a temporary relief from the abject poverty imposed on them.

· The average life expectancy in Iran, regardless of gender, is about 70 years, which means that every generation of Iranians is collectively robbed of more than 1 billion years of their lives.

. This regime is the only one in the world that has weaponized COVID-19 against its own people, creating a humanitarian crisis of epic proportions in order to survive, killing well over 400,000 Iranians so far.

· The occupying regime in Iran is one of the primary sponsors of terrorism around the world. It is after the inception of this regime that all the known terrorist groups in the region (apart from the PLO) came into existence, turning this regime  into the primary destabilizing force in the Middle East and elsewhere, threatening democratic values and human rights the world over. Tragically, this has been accomplished at great expense to its primary victim, the Iranian people.

This evil regime was founded on the blood of innocents and continues to survive on the same fodder. In 1978, to reignite his stalled unholy revolution, Khomeini’s agents chained the exit doors of the Cinema Rex movie theater in Abadan shut and set it on fire, burning to death 468 children, women, and men in the process, and blamed it on the Shah’s government. Soon after Khomeini seized power, the mass execution of high-ranking military and government officials ensued, followed by a devastating, lengthy war with Saddam Hussein, which was ignited by Khomeini himself. A war that was intentionally prolonged to exhaust the nation to the point that the people could not rise and topple his evil regime. A war that costed about one million lives and casualties on the Iranian side and 600,000 lives and casualties on the Iraqi side. Then the mass execution of political prisoners and activists followed, where in the span of only a few short months, tens of thousands of people were executed and buried in unmarked mass graves. Shortly after that, the top political activists, writers, journalists, and prominent leaders of religious minorities were assassinated. The recently appointed president of Khamenei’s regime, Ebrahim Raisi, along with the newly appointed head of the judiciary, Mohseni-Ejei, both played prominent roles in these mass murders.

Since the inception of the regime, half the population of Iran, the Iranian women, has been subjected to the vilest, draconian treatments by the barbaric, misogynistic mullahs. They have been forced to wrap themselves in cerements called Hijab – a concept that does not actually exist in the Holy Quran. Thousands of Iranian women have been jailed, tortured, raped, and murdered; many have been maimed by acid attacks, for standing up to their oppressors. At the same time, these same mullahs run a vast network of brothel houses all across Iran, through a convoluted and evil concept called temporary marriages, which can be as short as only a few minutes. These predatory brothel houses carry out several objectives: 1 – the entertainment of the regime’s allies and cronies in the region, and 2 – as a front to trap desperate and destitute young women for human trafficking and sex slavery.

By fragmenting the population into many different groups, the mullahs have managed to fester division and distrust across different segments of the society, causing each individual group to be consumed by its own survival against the oppressive policies of the government. For example, Shiites are divided into those who adhere to the concept of Velayate Faghih – the absolute rule of the supreme leader – and those who do not. Gonabadi Sufis, a Shiite Sufi group numbering in millions, are not even classified as Muslims. The over 20 million Iranian Sunnis are broken up based on their ethnicities. Religious minorities – Zoroastrians, Christians, Jews, Baha’is, Mandavis, and other Sufi groups – face the same challenges. Thousands of activists and dissidents have been murdered and thousands more, such as Nasreen Sotoudeh, Mohammad Nourizad, Hashem Khastar, and Soheil Arabi, are wasting away under daily torture in the dungeons of the regime.

Up to now, Khamenei’s regime has managed to survive by destroying the sense of unity and cohesiveness that should exist among the population at large. But through years of trials and tribulations, Iranians have finally come to the realization that they are all in this together, suffering at the hands of a common enemy, and that unity is the secret to success, as proven by the Gonabadi Sufi’s monumental achievement in 2009. On February 21, 2009, inspired by the teachings of their spiritual leader the late Dr. Noor Ali Tabande, tens of thousands of Gonabadi Sufis from all across Iran gathered in front of the parliament to peacefully protest against the vicious oppression they had endured. Up until then, hopelessness and a grave-like silence had ruled the lives of a nation under siege, much like the Soviet Union of the Stalin era. But the Sufis’ protest broke the facade of Khamenei’s regime’s absolute power, and proved to the people of Iran, and the whole world for that matter, that it is possible to stand up to even the most vicious oppressor through unity and peaceful protest, and paved the way for others to follow suit. A few months later, after the election results of 2009, Iranians of all walks of life, inspired by the Gonabadi Sufis’ unimaginable accomplishment, poured into the streets, peacefully protesting the sham elections that had pulled Mahmoud Ahmadinejad out of a magic hat as the elected president of Iran. This monumental event came to be known as the Green Movement.

In order to remain in power and survive, the mullahs have ravaged Iran’s economy and granted lucrative and one-sided contracts and concessions to Russia, the United Kingdom, France, Germany, and China at bargain-basement prices. With Russia controlling the northern half of Iran and the vast oil and natural gas resources of the Caspian Sea, and China controlling the southern half of Iran through the Persian Gulf, with its strategic location and vast resources ensuring a limitless supply of oil and natural gas to feed its industrial and military expansionist ambitions, the world faces the grim reality of China as the preeminent economic and military super-power, Russia as a major destabilizing force all across the globe, and a nuclear terrorist regime occupying Iran.

The West’s misguided policies gave us Khomeini, thereby turning Iran into the largest prison the world has ever seen. President Obama’s ill-judged policies directed by Khamenei’s lobbyists gave a renewed life to Khamenei and his regime at a time when the end to this nightmare was imminent. And now, despite Khamenei’s appointment of a mass murderer as president, the international community has yet to officially condemn the sham election that is in blatant violation of international law and cut off diplomatic and economic ties with an occupying force holding a nation hostage.

These accounts are just a snapshot of the atrocities that the ordinary people of Iran endure every day. The frequency and severity of the injustices inflicted upon the people of Iran necessitate urgent action to hold the oppressive regime in Iran and the perpetrators of these crimes accountable. Over the past 42 years, despite being massacred every time, through protest after protest to no avail, the people of Iran have clearly demonstrated that this regime is incapable of reform and heedless of the will of the people. In this last election, the entire nation rose against its oppressors and sent a clear message to the world that Khamenei’s regime has no legitimacy and is, in fact, an occupying force that has survived as long as it has because of the support of its backers, Russia, the European Union, and China.

It is incumbent upon the democratic nations of the world to be on the right side of history and stand by the people of Iran. A free and democratic Iran would benefit not only its people but the world at large, bringing stability and prosperity to the region and beyond.”