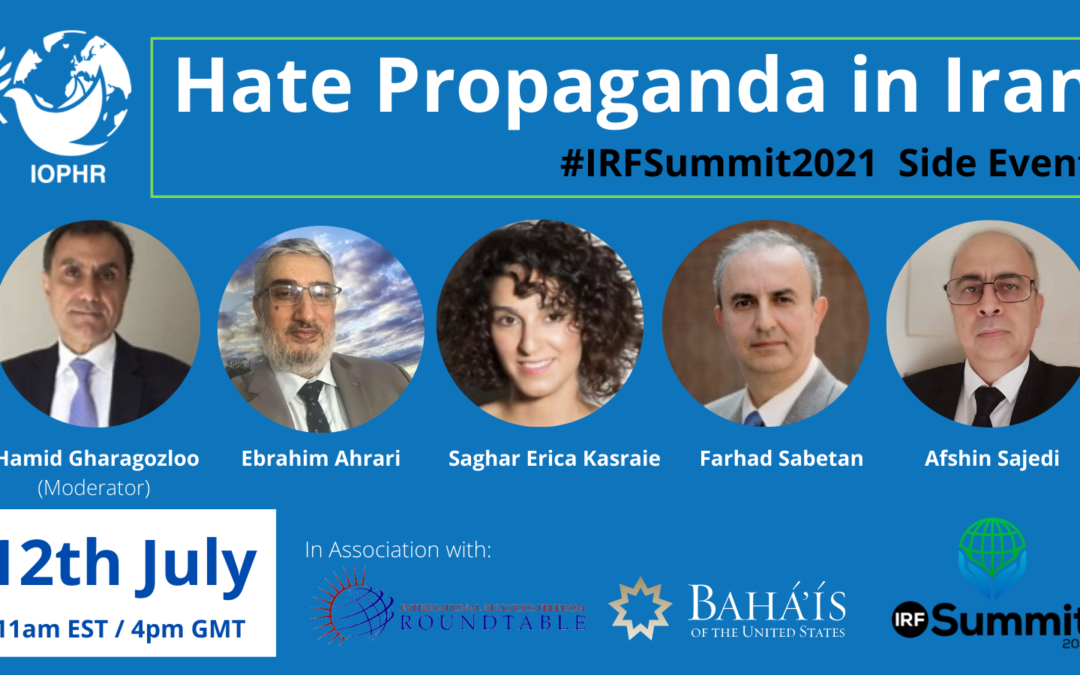 Dr. Farhad Sabetan teaches Economics at California State University, and has been a research economist in the private and public sectors for more than 15 years.

He is currently a spokesperson for Bahá’í International Community at the United Nations, and has been involved in the human rights field for the past fifteen years. He has given many interviews about the situation of the Bahá’ís in Iran on a variety of news media programs (including BBC, VOA, NPR, New York Times, Radio Farda, Radio France International, Radio Zamaneh, Deutsche Welle, Khodnevis, Radio Koocheh, Roozonline, Sobh-e-Emrooz, Seday-e-Iran, Radio Payam, and many others.

Dr. Sabetan received his PhD in Economics from University of California, Davis.

Ebrahim Ahrari Khalaf Is a prominent Journalist, human rights activist who has dedicated his life to the plight of the victims of the ruling regime in Iran – both Iranian and non-Iranian – and a consistent voice for the oppressed and persecuted groups, a political dissident, Kalameh TV host, and a member of the Sunni Community in Iran. He hosts weekly Cheshmandaz program at Kalameh TV, drawing more than 1.5 million viewers each week. Mr. Ahrari has been living in exile for the past 20 years. He receives regular death threats by the IRGC agents and has been the target of several unsuccessful assassination attempts.

Hamid Gharagozloo is the U.S. representative of the International Organisation to Preserve Human Rights (IOPHR) and has dedicated the last 20 years to advocating for human rights on behalf of religious minorities, ethnic groups, activists and citizens of Iran. As part of his role, he regularly liaises with the U.S. Department of State, domestic and foreign government officials, non-governmental organizations and various international media outlets. Mr. Gharagozloo was recently appointed as the Chair of the Iran Working Group at International Religious Freedom (IRF) Roundtable and has been an invitee and presenter at the behest of Ambassador Brownback and Mr. Brian Hook at the IRF Roundtables and Ministerial to Advance Religious Freedom for the past several years. Mr. Gharagozloo has been a panelist at various global symposia hosted by the U.K. Parliament, the Washington Institute for Near East Policy, the Brookings Institution and the Ronald Reagan Presidential Foundation and Institute, among others.

Ms. Saghar Erica Kasraie is the Executive Director of LIVING WATER Productions. She is an expert on the Middle East, a human rights activist, and voice for vulnerable religious minorities, especially women and children. In recent years, Erica has been a business, policy, media, and film consultant and was the Middle East Advisor to a prominent senior member of the U.S. House of Representatives Armed Services Committee. She organized and supervised Congressionally-hosted global conferences in Washington D.C. for activists planning the constitutional future of a free, democratic Iran. She was Executive Director of the Iranian Freedom Institute and a research assistant at the School of Culture and Security at the Institute of World Politics, educating the public and lawmakers around the world. Erica also served for five years as spokesperson of the Confederation of Iranian Students, working in Washington, D.C. and visiting with lawmakers on Capitol Hill, Iran experts, scholars, and think tank representatives.

Erica and her family fled to Italy shortly after the 1979 Islamic Revolution, then settled in the Washington, D.C. area. She holds a B.S. in Biology from Virginia Commonwealth University and was an FBI laboratory scientist. Along with her other civil society work, she worked four years as Outreach Director for the Jude Project, a Reformed mission providing materials to Christian leaders in Iran. Erica has appeared on Fox News, CBN, Newsmax, One America News, Al-Arabiya News, Alhurra TV, and Secure Freedom Radio.

Afshin Sajedi is Director of Research and Analysis at the IOPHR, and an expert on the Middle East. Mr. Sajedi, was born in Tehran, Iran and received his diploma in mathematics and physics in 1981. In 1993, he graduated in the field of Diplomatic and Political Relations from the University of International Relations in Tehran and few years later, received his Master’s Degree in European Politics and Policies from the University of Leuven in Belgium.

Since then, he has worked with IOPHR as a Political and Middle East Policy Adviser, as well as the Director of Research and Analysis.