Open Letter from IOPHR to Mr. Joseph Borrell, regarding EU’s human rights responsibilities in relation to the inhuman actions of the Islamic Republic of Iran 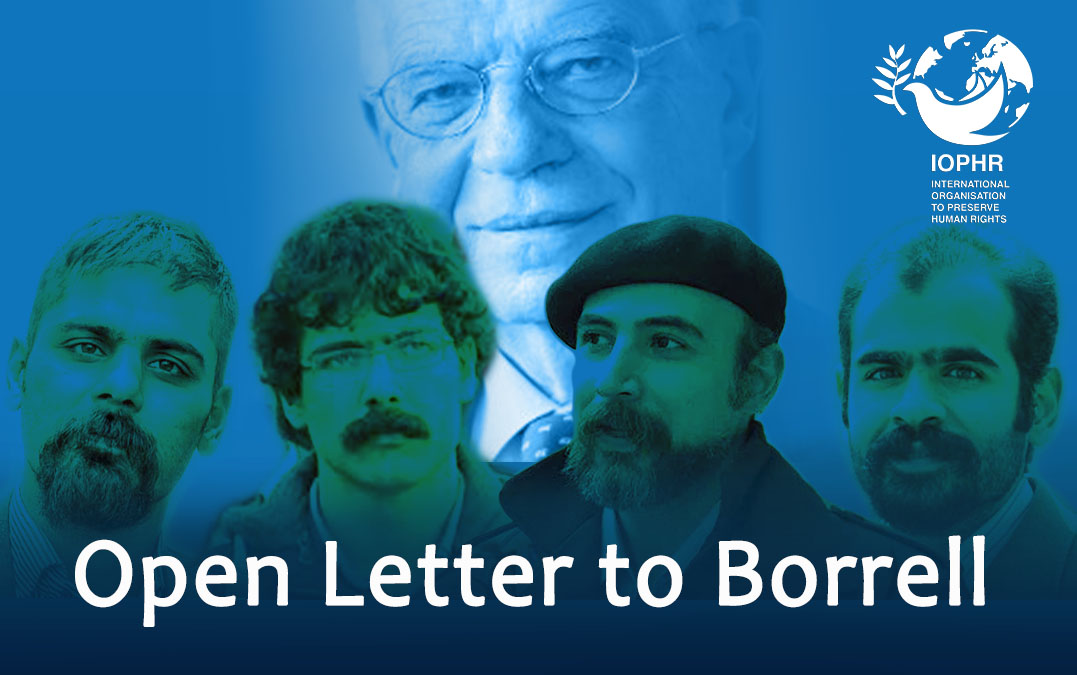 The open letter from of the International Organisation to Preserve Human Rights (IOPHR) to the High Representative of the European Union for Foreign Affairs and Security Policy And Vice-President of the European Commission, Mr. Joseph Borrell, regarding EU’s human rights responsibilities in relation to the inhuman actions of the Islamic Republic of Iran.

I am writing to you on the behalf of the International Organisation to Preserve Human Rights (IOPHR). IOPHR is an active independent non-for-profit organisation, and think tank based in the United Kingdom, with members spanning across European Union and North America. IOPHR is a non-political and non-religious organisation, with the primary aim of protecting human rights, and democratic values within societies. You can find more information about our organisation on our website: https://iophr.org

As you are aware and you have already been informed through numerous correspondences, the human rights situation in Iran is rapidly deteriorating. Especially, since, the arbitrary arrests, extrajudicial killings and the violation of the rights of Iranian citizens have become a daily routine of the Iranian authorities in the face of global passivity and indifference, which in itself can be considered a type of appeasement of the inhuman actions of the Iranian regime.

Meanwhile, ethnic and religious diversity in Iran has been and continues to be subjected to the most severe pressures and oppressions by the ruling minority, which has never been seen in the several thousand years’ history of Iran.
As you must know, Iran is one of the oldest civilizations in the world, consisting of hundreds of different ethnicities and religions, which have always lived side by side for thousands of years without disturbing each other and with mutual respect, but unfortunately forty years ago a minority of extremists imposed themselves on the citizens of Iran. This ruling totalitarian regime has tried to eradicate ethnic and religious diversity in Iran. Along with the Baha’is, Jews, Christians, followers of Al-Haqq, and many others.

The Gonabadi Sufis, with tens of millions of followers, are one of the religious groups that have suffered the most severe blows from the Iranian regime. These pressures intensified especially after Dr. Noor Ali Tabandeh, a liberal and moderate politician became the leader of the Gonabadi Sufis. Dr. Noor Ali Tabandeh focused his efforts on the spread of peaceful teachings among millions of Gonabadi Sufis, in the hope of ending the belligerent policies of the Iranian leaders in the mid-2000s. His teachings challenged and practically thwarted the ruling regime’s efforts to militarize Iranian society.

Finally, after a long period of organized invasion and destruction of religious places, houses of worship, as well as administrative and social restrictions on Gonabadi Sufis, four years ago security forces with the help of a group of family members of Dr. Noor Ali Tabandeh, the spiritual leader of Gonabadi Sufis, placed Dr. Noor Ali Tabandeh under house arrest. Then, after arresting and expelling the personal physician and other trusted staff of Dr. Noor Ali Tabandeh, and through employment of several new physicians and security personnel, they eventually killed him through poisoning, whilst he was under house arrest. At the same time a number of his students were also killed or imprisoned. Since then, at least four Gonabadi Sufis, Mostafa Abdi, Kasra Nouri, Mohammad Sharifi Moghadam and Abbas Dehghan, have been living in the dungeons of the Islamic government simply because of their opinions, without even a day of furlough.

Accordingly, the IOPHR writes to you in the hopes that, through your constructive attention to this issue, the release of the imprisoned Sufis will take place after four years of captivity.

The IOPHR also requests that, in addition to the two axes of the Iranian regime’s efforts to acquire nuclear weapons and dangerous missile programs, the very complex and critical dilemma of the human rights situation should also become the third axis, and a priority in any discussions with Iranian regime.

It should also not be forgotten that the Iranian regime’s pressure on religious and ethnic groups is not limited to Iran’s political borders, as the Iranian regime is persistently and diligently fomenting religious and ethnic divisions within the Middle East, especially in neighbouring countries, in order to wage wars and weaken religious tolerance. Which ultimately, will lead to the destruction of the social fabric of these countries. Obviously, global indifference and disregard towards this dangerous trend could also have very dangerous security and economic consequences for Europe. That is why IOPHR seeks your due attention to the aforementioned points.

Thank you in advance for your constructive attention to these matters, as it has a direct bearing on world security, especially within Europe.