IOPHR representative’s speech to IRF and the US State Department’s representatives on the Iranian Regimes’ fatwas calling for assassinations of Salman Rushdie, John Bolton and Mike Pompeo 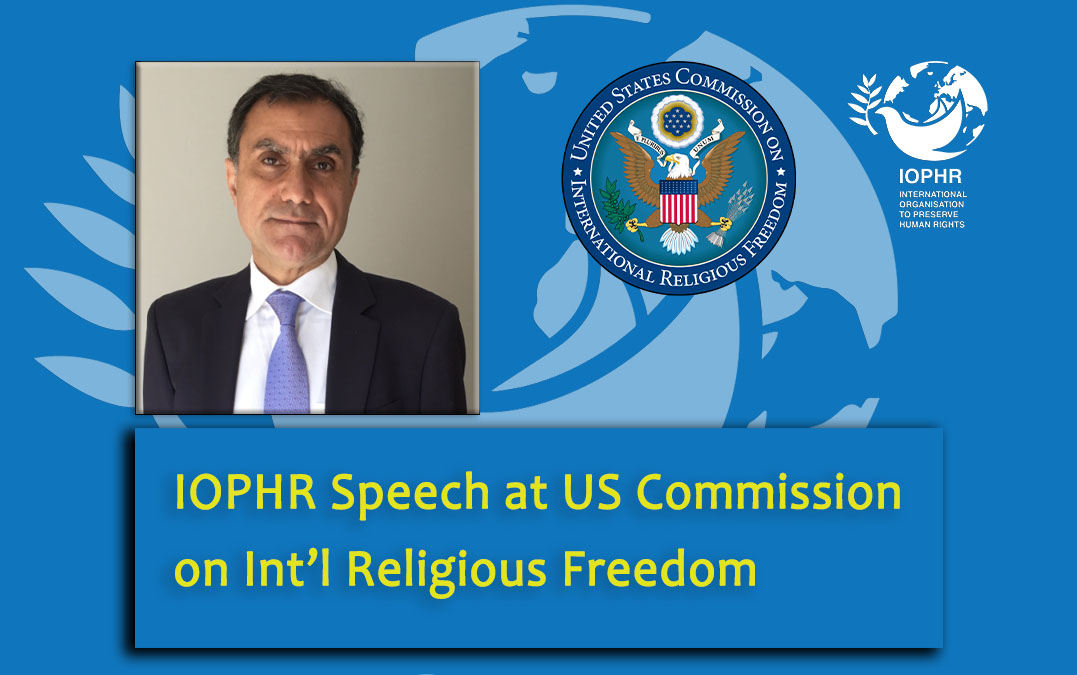 In a speech to IRF (International Religious Freedom) and US State Department representatives, Hamid Gharagozloo the US representative of IOPHR addressed the Iranian Regimes’ fatwas calling for the assassinations of Salman Rushdie, John Bolton and Mike Pompeo.

In his speech Mr Gharagozloo stated: ”At the same time, as Khamenei’s regime and propaganda apparatus have praised the would-be assassin of Salman Rushdie as a martyr and brazenly, without fear of retribution due to lack of any meaningful response from the current US administration, have also declared that President Trump, Secretary Pompeo, John Bolton, and others are next. Also, a few weeks ago, the police in New York arrested another would-be assassin who was plotting to murder Masih Alinejad, an Iranian-American dissident and women’s rights activist, based on a decree by Khamenei. The common thread between these two individuals is that they are both admirers of Ghasem Soleymani, Khamenei, and the ruling regime in Iran. Both had been ideologically influenced by the regime in Iran. And both were apparently in the US legally. Please remember that currently, there are 6 other open decrees for the assassination of President Trump, Secretary Pompeo, Special Representative Brian Hook, Morgan Ortagus, John Bolton, and Masih Alinejad.”

Mr Gharagozloo also declared, “Given all this, therefore, it is not unreasonable to expect that sooner or later these open decrees will be carried out by some of these individuals. What we are talking about here is the assassination of US officials of the highest ranks, and US citizens, on US soil. A critical point to consider here is that since its inception, both Khomeini and Khamenei have consistently declared that their regime is at war with its number one enemy, the USA, which makes the Islamic Republic a hostile regime and enemy of the US, as proven by repeated attacks on Americans and US interests all across the globe. Yet today, we are witnessing the disturbing development that Khamenei’s regime has managed to open many so-called Islamic centres all across the US with the sole purpose of spreading its diseased ideology and training generations of ideologues to carry out his regime’s objectives in the US. About two weeks ago we witnessed such an event in an Islamic centre in Houston, Texas where young children dressed like Hezbollah members, were pledging allegiance to Khamenei and his regime, professing to be his martyrs when they grow up. “

Mr Gharagozloo ended his remakes by stating that: ” The ruling regime in Iran has managed to accomplish all these seemingly impossible objectives by taking advantage of our democratic values, taking advantage of and abusing the amazing work that IRF, USCIRF, and everyone here does to advance religious freedom across the world. In other words, they are propagating hate, division, and a very dangerous ideology, all in the name of religious freedom. They are training and indoctrinating generations of American children to hate America and its democratic values, and harm Americans. And tragically this is not limited to the US. They have been pursuing the same goals and objectives all across Canada, Europe, North Africa, the Middle East, Venezuela, Brazil, and Argentina. Therefore, I am asking everyone here to help confront this evil regime and stop its dangerous abuse of our democracy and the grave threat it imposes on the world by informing the members of congress of these disturbing developments and help draft legislation to confront and stop this threat. Religious freedom is predicated on the pillars of love and unity, not hate and division. Religious freedom is not the maligned and evil interpretation of Devine values. And that is exactly what this regime, a hostile regime, an enemy of the US, is doing within our country under the disguise of practicing their religious freedom. “

At the end of his speech Mr Gharagozloo shared links on various covert activities of the Iranian regime in the West that show its intent on continued malicious activities in the West.